A Florida woman has been arrested and charged with assaulting a police officer inside the U.S. Capitol on Jan. 6, allegedly using a flag police to push the sergeant through the first set of doors to the House floor, causing him to fall backward and knock his head into a marble statue.

Audrey Ann Southard-Rumsey, 52, of Spring Hill, made her initial court appearance Wednesday in the Middle District of Florida court in Tampa. She faces nine federal counts, which include assault on a federal officer or employee; engaging in an act of physical violence in the grounds or any Capitol building; and obstruction of justice, according to U.S. Attorney’s Office for the District of Columbia.

U.S. Magistrate Judge Anthony Porcelli appointed a public defender to her and approved her release on $50,000 bail, the Tampa Bay Times reported. She was ordered to surrender all firearms and her passport, and she can only travel to attend court appearance in Washington, D.C.

Prosecutors allege Southard-Rumsey entered the Capitol building through the east Rotunda door at approximately 2:26 p.m. on Jan. 6. She walked to the statuary hall connector area, stopped and stood in front of a U.S. Capitol Police sergeant and several other officers standing behind him.

Southard-Rumsey was captured on video yelling, “Tell Pelosi we are coming for that b—h,” and “There’s a hundred thousand of us, what’s it going to be?” an FBI agent’s statement of facts says.

“Last friend, last bullet,” she also can be heard saying. “What’s it going to be?” 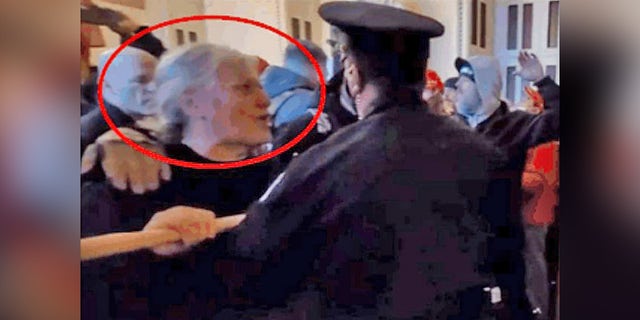 At some point during her interaction with the sergeant, Southard-Rumsey obtained a flagpole that she held and pressed against the sergeant’s chest. Court documents include screenshots from officer-worn body camera video and surveillance video of her actions. Southard-Rumsey started pushing the sergeant, causing him to fall backward into the first set of doors leading to the House floor.

The doors flew open, and the sergeant struck the back of his head on the base of the marble Lafayette statue. The sergeant “felt like he was being trampled during the ordeal,” according to court documents.

In the first 120 days after Jan. 6, approximately 440 people have been arrested on charges related to the Capitol breach. That includes 125 individuals charged with assaulting or impeding law enforcement, the Justice Department said. The investigation remains ongoing.

Southard is reportedly a vocal coach and piano teacher from Spring Hill and was previously photographed attending a counter-protest against a Black Lives Matter demonstration in New Port Richey on Aug. 8, 2020, according to the Tampa Bay Times.