Ministers were facing fury from families today after parents with gardens were seemingly banned from taking their children to playgrounds.

The Cabinet Office drew criticism after it suggested the communal spaces should not be enjoyed by those who have outside space at home and or just used for ‘socialising’.

It came after a father and his two young sons said they were sent home while making a snowman in their local park after the current lockdown in England came into force in January.

Tim Greany and his sons Bo, 6, and Wren, 8, who live in a flat without a garden, told BBC Newsround they had been taking photographs of their snowman when police officers told them to leave, making them feel ‘upset and annoyed’.

But amid fury from parents’ groups Matt Hancock was forced to wade into the row today, telling Sky News it was ‘totally fine’ for anyone to go to the park as long as they obeyed Covid rules.

Asked by Scottish presenter Niall Ferguson whether he could take his son to the park to teach him rugby, the Health Secretary said: ‘The rules are really clear, which is that exercise outdoors, with members of your own family or with one other person, one-to-one where you keep that person at a social distance, that is ok.

‘Of course going to the park with your kids to play rugby is not only allowed but perfectly reasonable, totally fine.

‘If you are Scottish this is one of those rare moments where Scotland has recently beaten England, so I can see why you are so enthusiastic about it.’ 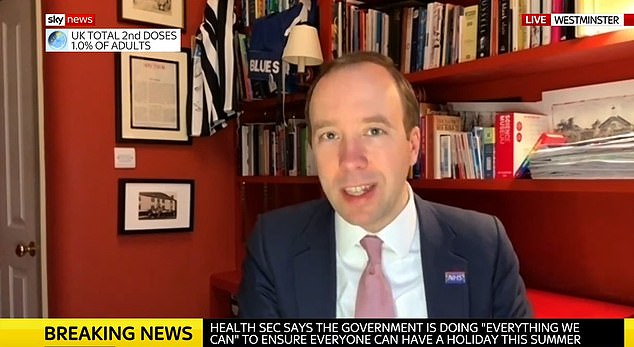 Amid fury from parents’ groups Matt Hancock was forced to wade into the row today, telling Sky News it was ‘totally fine’ for anyone to go to the park as long as they obeyed Covid rules 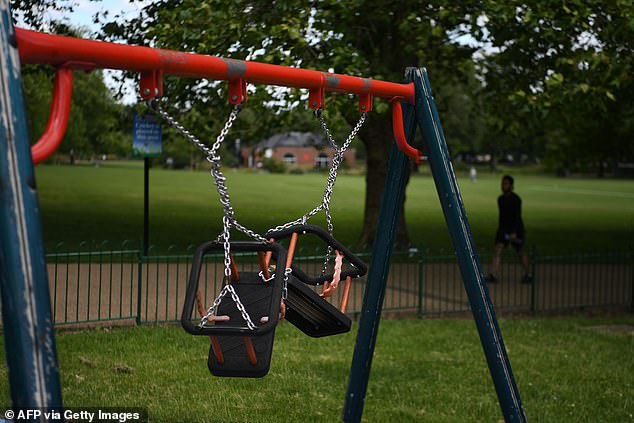 It came after the Cabinet Office last night said: ‘Playgrounds are primarily for use by children who do not have access to private outdoor space’

In a press statement about Mr Greany and his children last night, the Government said it recognises ‘the importance of exercise to the physical, mental and emotional wellbeing of children’ and has left playgrounds open for this reason.

But a spokesman added: ‘Playgrounds are primarily for use by children who do not have access to private outdoor space, and while parents, guardians or carers are allowed to take children to a playground for exercise, they must not socialise with other people while there.’

Playing Out, a group which ordinarily encourages parents to organise play sessions for children on their streets, has said children are ‘suffering’ due to unclear guidelines.

Playing Out’s co-director, Alice Ferguson, said the group is asking the Government to ‘include play as essential exercise’ – one of the limited reasons people are allowed to leave the house under current legislation.

Ms Ferguson said: ‘Children playing outside doesn’t get recognised as being exercise because it doesn’t look like exercise in the way adults do it, like going for a run.

‘It would give parents reassurance that it’s a legitimate reason to be outside with their children if it were included in the guidelines.

‘There is a lack of clarity, and the people that suffer in the end are the children who are not able to exercise.’

The group also called for clarity during the second national lockdown in England last November.

Tory MP Steve Baker last night voiced his anger at the diktat. He told Sky News: ‘This unabashed vehemence in the expression of state power beyond the limits of the law would be comical if it were not for real.

‘As Government succeeds in vaccinating vulnerable, incidents like this only underscore the need to reclaim our lives once and for all.’

Former healthy secretary Jeremy Hunt tweeted: ‘I’m in the ‘go harder and faster’ camp on Covid but it does seem over-zealous to allow two adults to exercise outdoors but not two children (who face much lower risk from covid but probably greater mental health risks from lockdown).’

Tougher restrictions ‘may be needed’ as lockdown fails to drive Covid cases down, study shows

Police respond to an active shooter at Colorado supermarket

Kylie Jenner Is the Highest Paid Celebrity of 2020

First Look: Behind The Music Is Coming To Paramount+