A young woman confronts a Boots staff worker at the till and accuses her of sleeping with her father.

The customer was filmed launching a torrent of abuse at a Boots store in south London.

In the video the woman asks the unnamed worker: ‘So have you been sleeping with my dad?’

‘What do you mean?’, the staff worker replies as she appears startled by the confrontation. 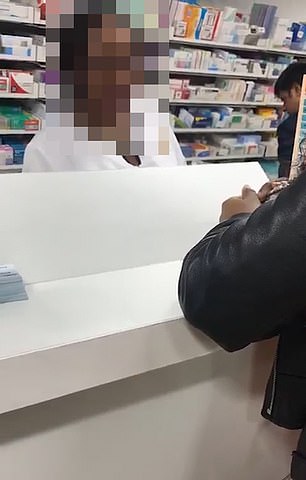 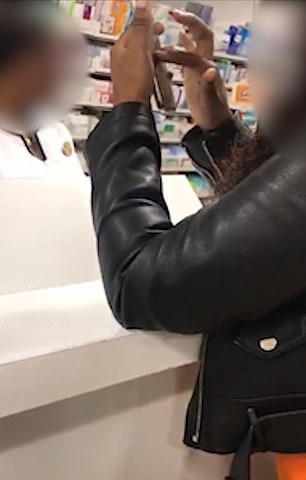 A young woman confronts a staff worker at the Boots store in south London (left). The customer scrolls to find a picture on her phone before showing the woman (right)

The young woman asks: ‘Have you had sex with my dad?’

However the staff worker shakes her head and replies ‘no’ as stunned shoppers wait to be served.

But the young woman, who is seen wearing a black leather jacket, shows no sign of backing down as she says: ‘Are you sure? Don’t lie to me.’ 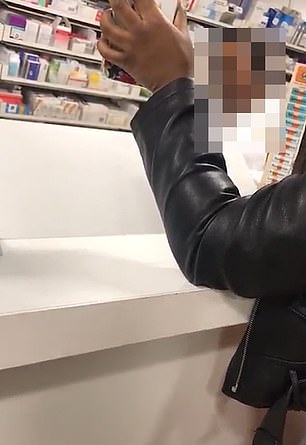 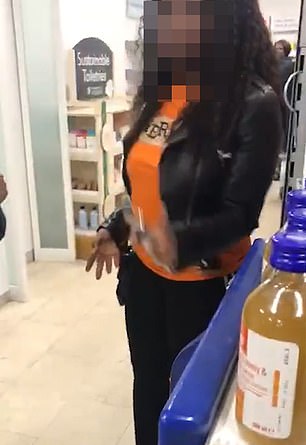 The customer displays the phone screen and says: ‘Why did I find this in his bag?’ (left). A Boots security guard steps in to diffuse the incident (right)

The customer shows the staff member a picture on her mobile phone and says: ‘Why did I find this in his bag?’

Yet the staff member replies: ‘You’re going to come to my workplace to disturb me?’

‘I don’t care, I don’t care! You know what I am talking about,’ the young woman replies.

And the customer shows no sign of giving in and she taps the screen of the phone and says: ‘This is your address isn’t it? Is this your address? And it was in my dad’s bag – and is this not your house?’

The staff member walks away from the counter and dials the police as the customer continues to question if the picture on her phone is the woman’s house.

The customer continues: ‘You want to call the feds now? When you have been sleeping with my dad and my mum f****** respected you calling you aunty?

She added: ‘I am warning you now to stay away from my dad.’

The staff worker then walks away as the young woman follows her around the counter.

Stunned shoppers stand in shock as they wait to be served before a security guard steps in.

The video was shared online on February 25 and has since gathered 1.6million views.

A Boots UK spokesman told The Sun: ‘We take the safety of our team very seriously and can confirm the police were called following an incident in one of our stores.’

The company said they continue to support the colleague who was left shaken by the incident.

Alastair Campbell would let partner 'blame herself' for depression

The Real Meaning Behind Levitating By Dua Lipa