Rescue crews have begun to lift the wreckage of a torpedo boat thought to have been heroically commanded by John F Kennedy in WWII from New York City’s Harlem River.

JFK’s valiant record from rescuing several of his PT 109 crew members in August 1942 after being rammed by a Japanese warship memorialized him as a war hero and paved his way to the White House.

But aboard the lesser-known PT 59 in November 1943, on his third command as Lieutenant, Kennedy rescued 10 Marines from a troop of Japanese infantrymen hunting down American soldiers on the Solomon Islands, east of Papua New Guinea. 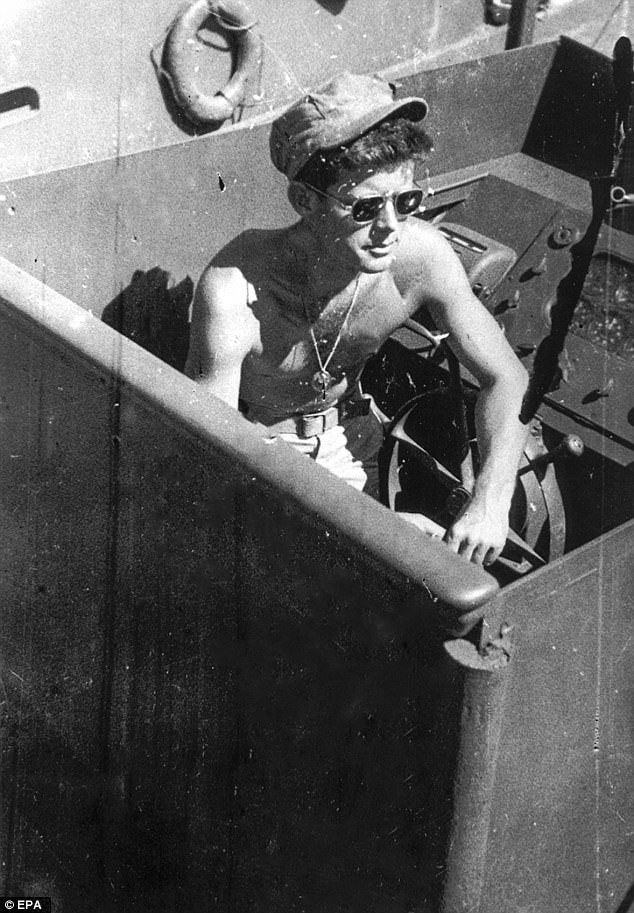 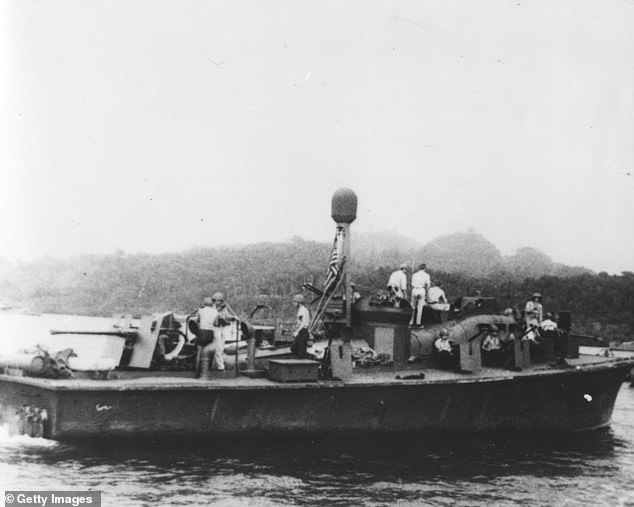 View of motor torpedo boat PT 59 during its World War II service in the Solomon Islands, early to mid 1940s 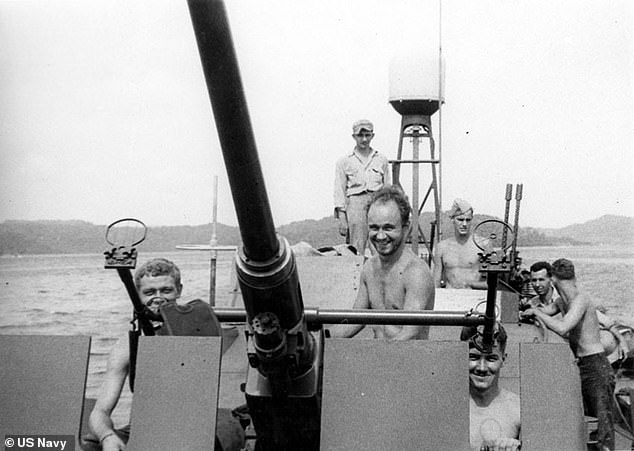 Front view, a 40 mm Bofors, and twin .50 BrowningsPT-59 US Navy patrol boat once commanded by John F Kennedy during WWII. Commanding the 59, Kennedy (not pictured) rescued 10 Marines from a troop of Japanese infantrymen hunting down American soldiers on the Solomon Islands, east of Papua New Guinea

Despite whispers of the Harlem River being the PT 59’s last resting place, only last month when city officials on a flood-protection project began lifting hardwood planks from near the 207th Street train yard, did the rumours become a possibility.

‘This is history,’ said Harlem local, Bob Walters, 73, who told the Chicago Tribune that he spent much of his childhood on the river.

In 2017, Kennedy biographer William Doyle, said the PT 59 ended up in a training center in Rhode Island and then the Philadelphia Navy Yard in the years after the war.

Following the paper trail, Doyle discovered that after its service the vessel was sold on to a weekend fisherman who used it as a party boat, the New York Post reported. 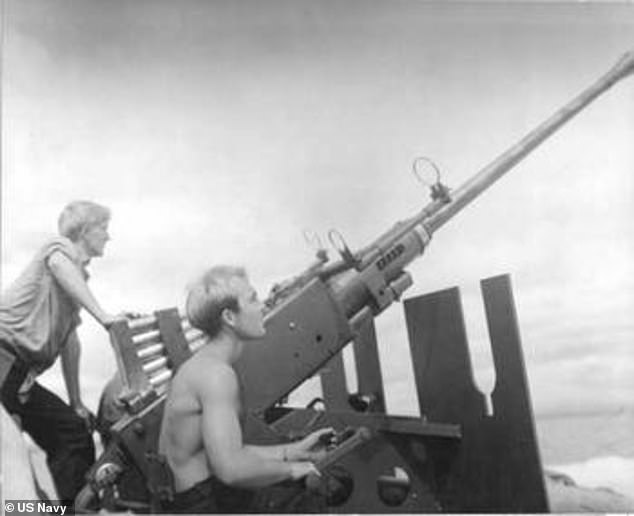 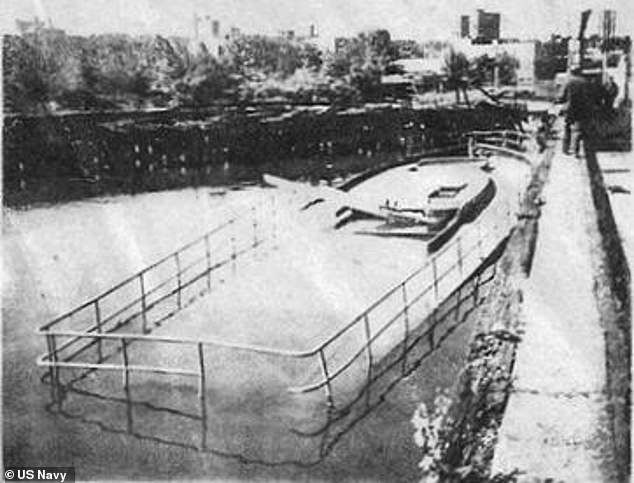 Black and White photo of John F. Kennedy’s old command PT-59 abandoned in the Harlem River in New York, rapidly decaying away, soon to sink. The boat had been converted to a fishing vesselPT-59 US Navy patrol boat once commanded by John F Kennedy during WWII 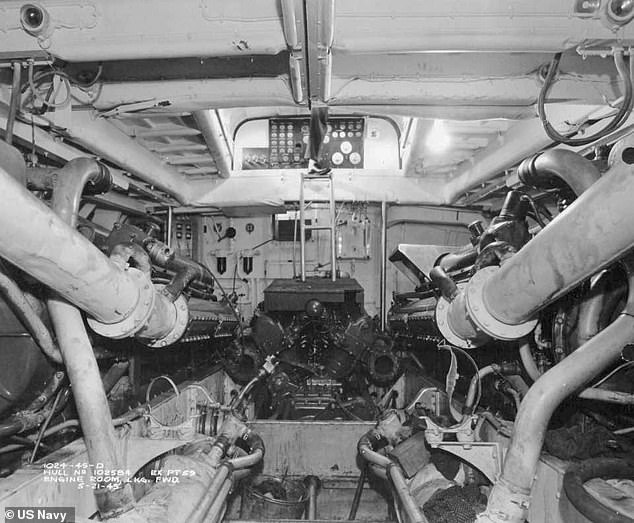 Damaged in a fire, the ship was transformed into a houseboat during the 1970s and docked on the Harlem River at 208th in Inwood.

Though Doyle knew the last owner sank the boat after it became a hazard, the full story of the ship’s twilight years has now been revealed by the last man to drive the scrap of presidential history.

Redmond Burke, 80, a retired schoolteacher, told the Tribune that he bought the 59 for $1,000 while working at Bronx Community College in 1970.

By then, the boat would have seemed alien to Kennedy – its war-ready engines stripped out for more economical replacements and its turrets replaced with fishing rod holders.

Burke said that he was unaware of the boat’s history until one of his students, who’d been researching Kennedy’s war record, told him, ‘You’re living on a famous boat’.

In the mid-1970s, he let the boat, which he said had become a hazard, sink to the bottom of the river.

‘I had hoped it might have a more dignified end,’ he said, ‘but it was not to be.’

Before he became president, John F. Kennedy was a serviceman in the US Navy whose tales of heroism during World War Two were the stuff of legend.

Kennedy, who at the time was a young naval officer, commanded the PT 109 patrol boat off the Solomon Islands in the Pacific.

The PT 109 sank on August 2, 1943, after it was hit by a Japanese warship and cut in two just off Gizo, the main town of the Solomon Islands.

Two members of Kennedy’s crew died when the boat was hit.

Kennedy and 10 other survivors swam 15 hours to reach a nearby island.

He towed one injured survivor, engineer Patrick Henry McMahon, by swimming with a strap from McMahon’s lifejacket in his teeth.

They later swam to another island where there were coconuts to eat.

Kennedy carved a message into one coconut and gave it to a native islander to take to rescuers.

Kennedy later was awarded the Navy and Marine Corps Medal for those actions, as well as the Purple Heart Medal for his injuries.

The incident was dramatized in the 1963 movie PT 109, which starred Cliff Robertson in the lead role as a young JFK.

Patrol torpedo boats, such as the PT 109, had mahogany hulls.

Plywood was used for the internal structures, chart houses and gun turrets.

They were 80 feet long and powered by 12-cylinder gasoline engines.

The boats were used primarily to attack surface ships, but they also were used to lay mines and smoke screens, to rescue downed aviators and to carry out intelligence operations.

Jon-Michael Ecker: What else can you watch the Queen of the South actor in?