Passengers arriving in Heathrow from Brazil today revealed how they made a desperate scramble home through France to avoid having to quarantine in hotels for 10 days.

Travellers entering England from Brazil, where a new mutant strain of Covid is running rampant, will be forced to self isolate, possibly at the cost of up to £1,500, according to new plans revealed today.

Today, Home Secretary Priti Patel declared that Britons returning from around 30 ‘red list’ Covid countries will be forced to quarantine in hotels for 10 days at their own expense.

The list includes South Africa, which is also enduring a new coronavirus strain, and Portugal, which has many connecting flights from Brazil.

Georgina Masullo Brazil, 39, and her 16-year-old son Pedro arrived at Heathrow Terminal Two this morning from Sao Paulo via Paris.

Ms Masullo, who is originally from Brazil but now lives in Hammersmith in West London, said she had been trying to fly back to the UK for the last three weeks having flown out in November. 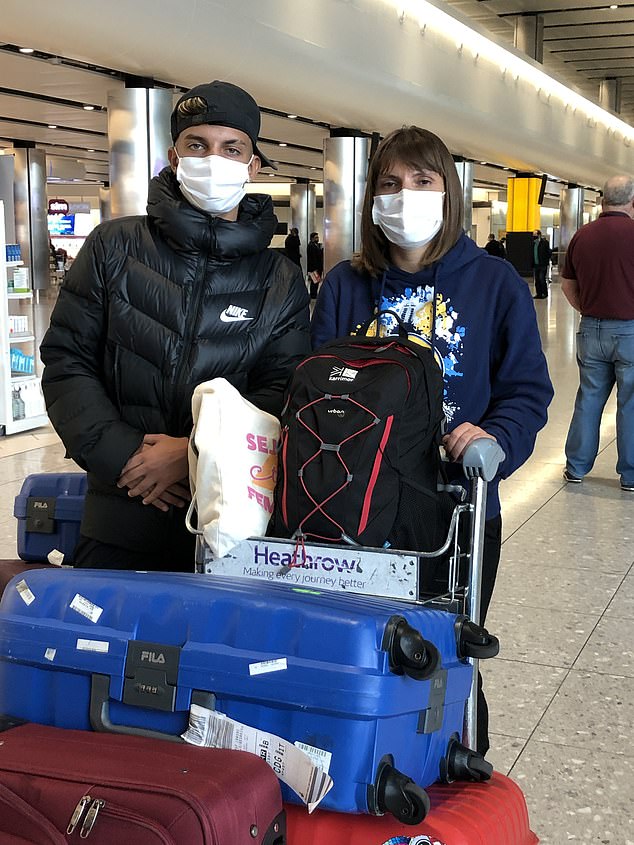 Georgina Masullo Brazil, 39, and her 16-year-old son Pedro arrived at Heathrow Terminal Two this morning from Sao Paulo via Paris 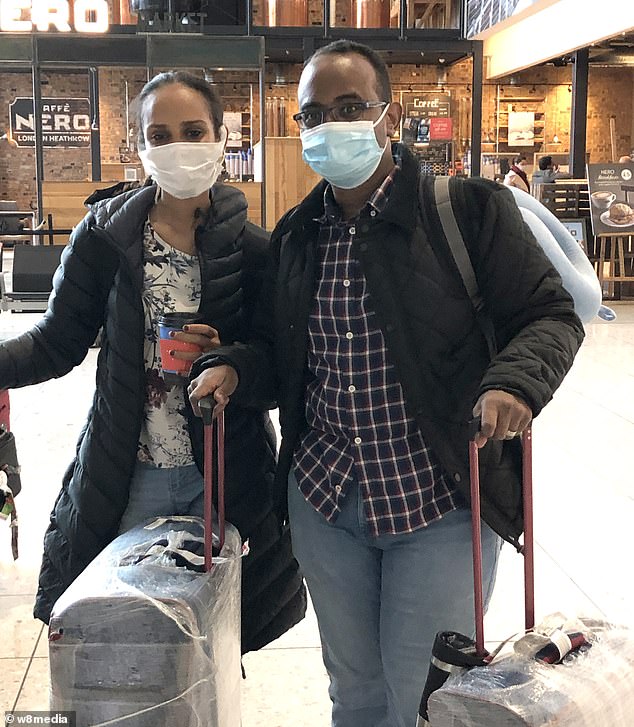 Mohamed Elsharif, 34 and his 30-year-old wife Waad Ebrahim were returning home to Teeside from Heathrow having flown from Khartoum in Sudan 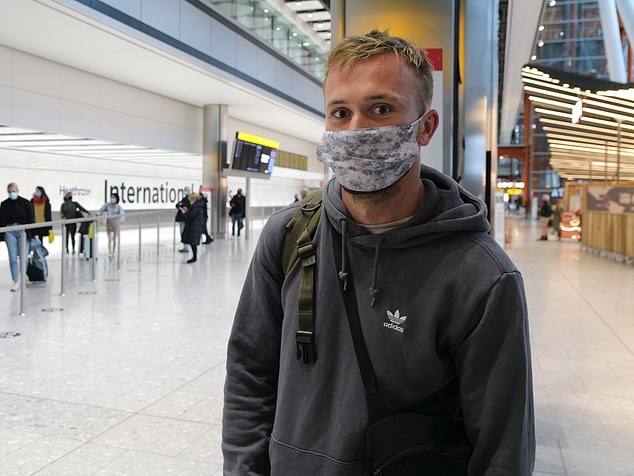 Tom Oliver, 25, flew back from Dubai this afternoon into Heathrow Terminal Five after visiting his girlfriend

She said: ‘I’ve had three flights cancelled over the last 20-days, nobody is flying direct to London.

‘I read about the British government’s plans to force travellers coming back from Brazil to quarantine in a hotel for ten days and I didn’t want that.

‘My son and I decided to get the first available flight from France and so flew ten hours to Charles de Gaulle Airport in Paris and got a flight to Heathrow from there.

‘I’m so glad we’ve come back now and not in a few days time because the last thing we would’ve wanted to do after a ten hour flight is to be whisked to an airport hotel and have to spend the next ten days cooped up there in a small room.

‘We’d flown to São Paulo in November to see family over Christmas. The virus is bad over there but so is the situation here and there are more restrictions in the UK.

‘Our home is just 15-miles from Heathrow. We are going to self-isolate there in much better comfort than a hotel. 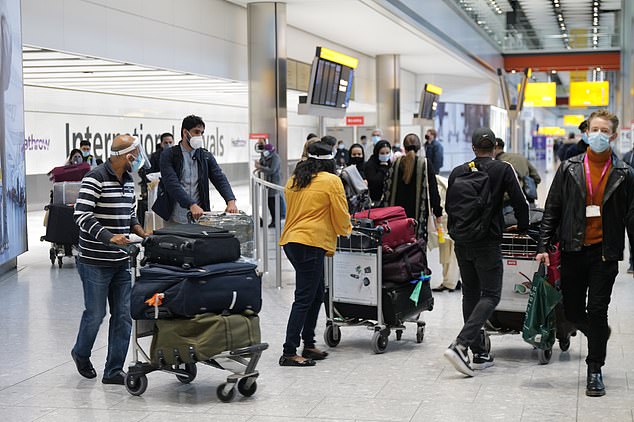 Today, Home Secretary Priti Patel declared that Britons returning from around 30 ‘red list’ Covid countries will be forced to quarantine in hotels for 10 days 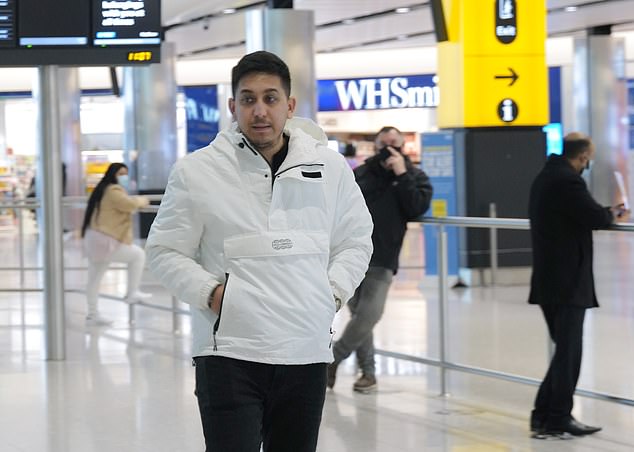 The list includes South Africa, which is also enduring a new coronavirus strain, and Portugal, which has many connecting flights from Brazil 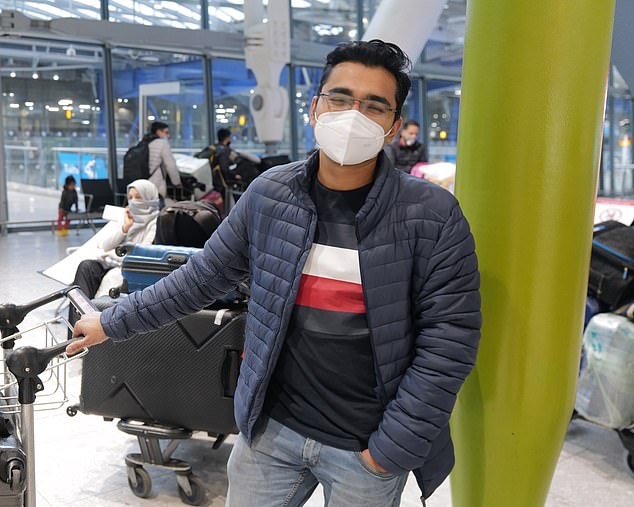 Suhas Vadvaraju, 29, who works as a manager for a software firm returned to London from Southern India this afternoon

‘I’ve spent hundreds of pounds travelling, I don’t want to spend hundreds more having to quarantine in some strange place.’

Julia Santos, 27, landed at Heathrow this afternoon having also caught a connecting flight from Paris.

She has spent the last five months in Porto Alegre in the south of Brazil and flew to the French capital overnight from Rio de Janeiro to head home to Finchley, North London.

She said: ‘There were a number of passengers on the Paris flight who had transferred from Brazil and other South American countries. We were all pulled aside at customs and asked for proof of residence as the UK isn’t currently allowing visitors from those countries.

‘It’s of course to do with the Coronavirus but I think situation here is every bit as dire as it is in Brazil – perhaps more so as Britain has the highest death rate per capita in the world.

‘As we passed through security and customs, they were telling us that we are among the last travellers from Brazil to avoid having to self isolate in a local hotel.

‘I wouldn’t want to do that, for one it’s really expensive and not particularly very nice to spend ten days stuck in a hotel unable to come out of your room.’ 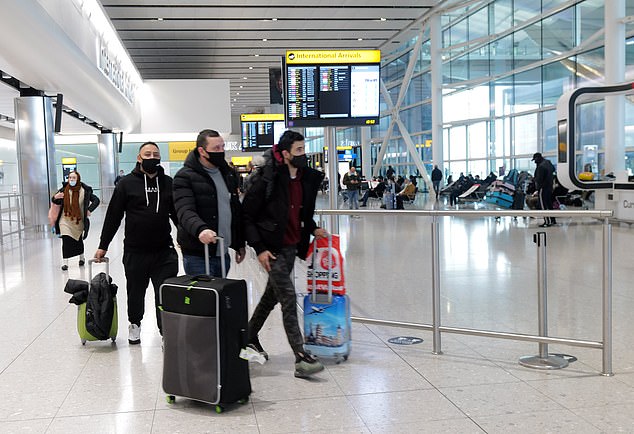 Suhas Vadvaraju, 29, who works as a manager for a software firm returned to London from Southern India this afternoon.

He flew into Heathrow Terminal 5 from Hyderabad, where he has spent more than five months visiting family.

Suhas, who now lives in Kew but is originally from India, said: ‘I can’t spend longer than six months out of the country due to my UK visa and I was gone more than five but this news about a quarantine list prompted me to come back now.

‘I’d been putting off flying back to England but I didn’t know if India would be on a list of countries where returning travellers have to quarantine in a hotel so I decided to get the first available flight.

‘It doesn’t sound very pleasant to have to stay in a small room for ten days, I think it’s a little unnecessary.

‘The Covid situation is much worse in Britain than it is in India but this country is a resolute one and I think we’ll get through it in the end.’

Tom Oliver, 25, flew back from Dubai this afternoon into Heathrow Terminal Five.

Tom, from Surrey, said: ‘I’d been out in Dubai for three weeks as my girlfriend works for UNICEF in Afghanistan and we’d agreed  to meet there. I hadn’t seen her for about eight weeks before that trip.

‘I’d only heard about these plans to quarantine travellers from certain countries yesterday and it filled me with dread.

‘Apparently you have to fork out around £1500 for a ten day stay in a hotel near the airport. I’d struggle to be able to afford that.

‘If I had to do it then I would – of course – but it’s a big expense and would hit me financially very hard, having already paid out for three weeks in Dubai.

‘I was asking people nervously today if these plans were already in place. Luckily they’re not.

‘Although the list of countries haven’t been finalised, I’d be surprised if the United Arab Emirates were not on it as infection rates there have apparently been going through the roof.’

Kelly Alkhouli, 23, was returning from Dubai where she’d been on a business trip and added: ‘I’m glad I don’t have to self isolate in a Heathrow hotel for 10-days, frankly it sounds ridiculous.’

African countries, including South Africa, Kenya and Ethiopia, are also likely to be included on the list where returning travellers have to quarantine in hotels.

Mohamed Elsharif, 34 and his 30-year-old wife Waad Ebrahim were returning home to Teeside from Heathrow having flown from Khartoum in Sudan.

They had caught a flight from the Sudanese capital to Istanbul in Turkey and flown to London from there.

Mohamed works for the NHS as a psychiatric registrar in Middlesbrough but flew to Sudan due to a family emergency last week.

He tested positive for Covid just after Christmas but is now free of the virus and tested twice weekly.

Mohamed told MailOnline: ‘I’m not sure how this quarantine plan is going to work and I don’t know how effective it will be but it isn’t my field of expertise.

‘I’m not really I favour of it because it’s hugely expensive, people don’t always travel abroad for holidays, it can be work or, as in my case, to answer a family emergency.

‘Travelling is pricey enough, let alone having to spend another £500 to £1500 on having to self isolate in an airport hotel.

‘Would it not be more sensible to increase testing at UK airports on passengers arriving back? If people test negative, there is no problem.

‘I know that the Government are trying to stop the spread of new mutant variations of the Covid virus and you’d have to hope whoever has drawn up this idea has been well briefed but I’m not so sure about it. It seems a bit excessive to be honest.

‘I’m now going to self-isolate at home for five days and then I’m going to take a test and if I’m negative I can return to work.’

Mohamed added: ‘Some countries around Sudan, like Kenya and Ethiopia, are likely to be on this list of countries so we were to keen to come back now.’

Ruth Bader Ginsburg’s Net Worth Will Surprise You