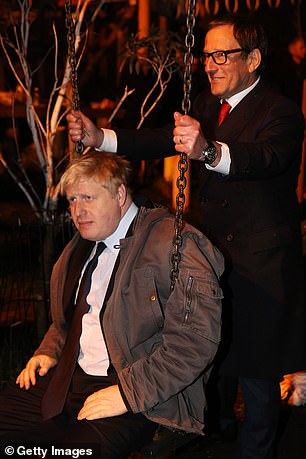 Robert Jenrick today reiterated his ‘regret’ at his involvement in a ‘cash-for access’ scandal involving approval for a £1billion property development for a Tory donor.

The Housing Secretary said he wished he had not sat with Richard Desmond at an event just weeks before he pushed through the Westferry Printworks scheme before it became eligible for a local development levy.

The move saved the former Express proprietor and Ukip backer tens of millions of pounds on the scheme to build 1,500 upmarket homes on the brownfield site in Docklands.

Mr Jenrick spoke as he defended his sweeping reforms to the planning system against criticism that the move to speed up building will create slums and ignore local concerns.

Asked why people should trust him over new planning proposals which will give more power to large developers after the controversy over the Westferry development project, Mr Jenrick told BBC Radio 4’s Today programme: ‘Well I don’t think this does give more power to developers, it creates a much more certain system. It will, for example, fix the challenge of developer contributions once and for all.’

Asked what he learned from the experience of the Westferry development, Mr Jenrick added: ‘I’ve set out the events around that decision and there are definitely lessons to be learnt.

‘I wish I hadn’t been sat next to a developer at an event and I regret sharing text messages with him afterwards.

Asked what he learned from the Westferry affair, Mr Jenrick said: ‘I wish I hadn’t been sat next to a developer at an event and I regret sharing text messages with him afterwards.

‘But I don’t regret the decision, because I think it was right to get housing built on a brownfield site on a part of London that desperately needs it.

‘The system that I’ve helped to design that is set out in the proposals we’re publishing today will actually move us forward significantly on some of the challenges that that case rose.’

It was revealed in May that the Housing Secretary was lobbied about the application by Desmond at a Tory Party fundraiser, when they were seated next to each other.

Mr Desmond later made a £12,000 donation to the Conservative Party and was in text message contact with Mr Jenrick on November 18 last year after swapping numbers at the exclusive dinner.

Mr Jenrick gave the last-minute go-ahead to the project after both the local council and the independent Planning Inspectorate had decided it should be refused.

His decision on January 14 came one day before Tower Hamlets Council approved a ‘community levy’ on developments that would have cost Mr Desmond’s company Northern and Shell between £30million and £50million.

The Cabinet minister later had to quash his own approval for the scheme – which had been recommended against by civil servant – conceding that the decision was ‘unlawful’ due to ‘apparent bias’.

Downing Street, which has distanced itself from the planning decision, said Mr Johnson still has ‘full confidence’ in Mr Jenrick.

Fight against discrimination will bring change

Hannah Storm Stays In The Game, Re-Ups With ESPN

Jari Jones’s Calvin Klein Campaign Was a Moment of Manifestation