Oops! How Meghan was obscured from TV viewers by a giant candle… and a jolly tall royal

The Duchess of Sussex found herself tucked behind a candle and one of the tallest members of the Royal Family yesterday.

It meant TV viewers struggled to get a glimpse of her because she was often obscured from view.

The Duchess, 41, and her husband Prince Harry were seated behind Tim Laurence, Princess Anne’s husband, who towers over his wife.

A large church candle also stood between her and the TV cameras, while her wide-brimmed hat made it even more difficult for fans to see her.

Meghan and husband Prince Harry were seated in the second row at Westminster Abbey next to Princess Beatrice and her husband Edoardo Mapelli Mozzi.

She may have been happy to keep a low profile after a number of interviews in recent months in which she has been highly critical of the Royal Family.

Despite the criticisms, she has praised the Queen and revealed in an interview with US chat show host Oprah Winfrey last year that the monarch had always shown her kindness. 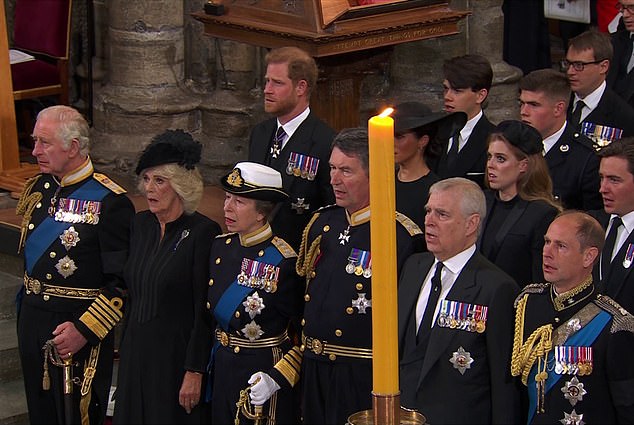 TV viewers struggled to get a glimpse of the Duchess of Sussex as she was stood behind a candle and the Princess Royal’s tall husband, Tim Laurence

‘The Queen has always been wonderful to me,’ she said. ‘I just really loved being in her company… she’s always been warm and inviting and really welcoming.’ She may have been reflecting on that yesterday when she was seen to wipe away a tear as the monarch’s coffin was taken from the Abbey.

She wore a black cape dress by Stella McCartney with long gloves and a pair of pearl and diamond earrings given to her by the Queen after she married Harry.

Sophie, Countess of Wessex, has long been viewed as the Queen’s favourite daughter-in-law and yesterday she shed a tear for the monarch to whom she had grown so close, wiping her cheek as she left the funeral at Westminster Abbey with other royals.

Sophie, 57, had accompanied her husband, Prince Edward, and their two children, Lady Louise Windsor, 18, and James, Viscount Severn, 14, to the service. 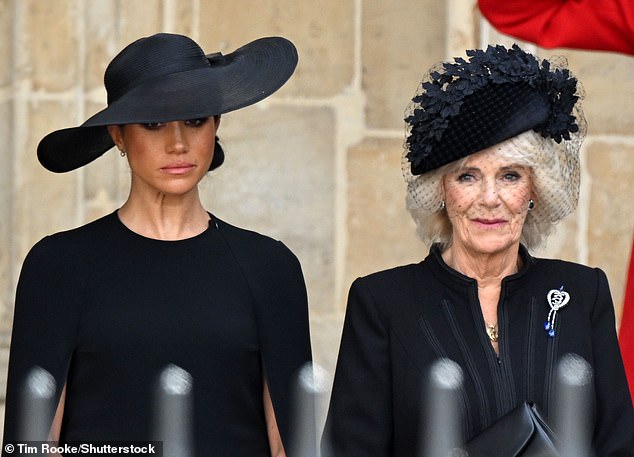 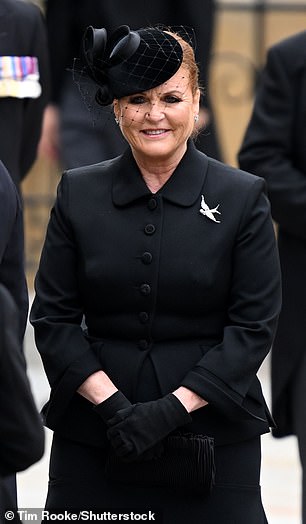 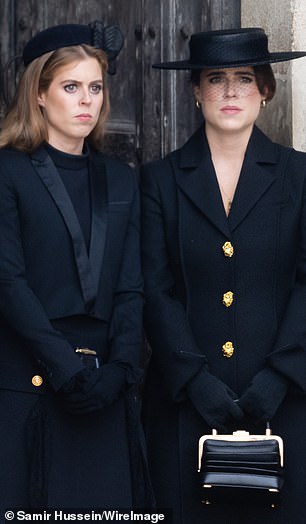 Sarah, Duchess of York, appeared to have been welcomed back into the Royal Family while her daughters Beatrice and Eugenie mourned the loss of their grandmother

She was described as the Queen’s ‘rock’ following the death of Prince Philip and has been a constant presence since the monarch’s death, making a number of appearances to thank well-wishers across the country.

It has been reported that she will also inherit a number of patronages held by Her Majesty, a step seen as a reflection of the close relationship they shared. In a personal touch, the Countess of Wessex’s outfit was embroidered with a motif of lilies of the valley – the Queen’s favourite flower.

Sarah, Duchess of York, 62, appears to have been welcomed back into the Royal Family.

She too was seated on the second row, directly behind the Princess of Wales, at yesterday’s funeral.

Although she was excluded from Prince William and Kate Middleton’s wedding in 2011 and did not attend Prince Philip’s funeral last year, she continued to enjoy a warm relationship with the Queen. She last week she said of the late Queen: ‘To me, she was the most incredible mother-in-law and friend. I will always be grateful to her for the generosity she showed me in remaining close to me, even after my divorce.

Belgravia: Was Edmund Bellasis real? Did he die in battle?