REVEALED: Human traffickers are exploiting an ‘easy-peasy’ route into Britain by flying illegal migrants to Ireland with fake IDs and driving them over the border for £2,000-a-go 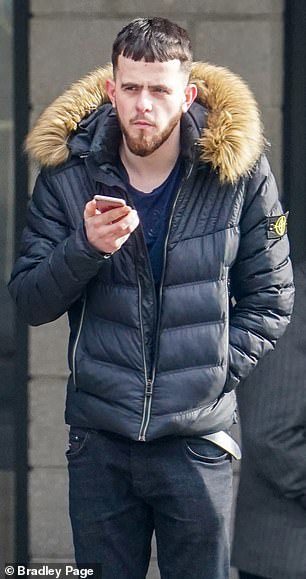 British-based Albanian Kledjan Kurtaj, 20, helps organise fake IDs and flights via a European capital such as Dublin or Paris

Human traffickers are exploiting a back-door route into Britain that makes it ‘easy-peasy’ to get into the country.

Operating from the UK, they arrange for illegal migrants to come here via European airports and boast that it is as simple as opening a front door.

The shocking expose comes as a new migrant crisis sweeps Europe and people smugglers cash in on those fleeing their homelands.

One trafficker told the Daily Mail he could arrange for a migrant to come to London from Albania for just £2,000.

British-based Albanian Kledjan Kurtaj, 20, helps organise fake IDs and flights via a European capital such as Dublin or Paris.

He boasted he could get migrants false European ID cards in Albania, before flying them to Italy and then on to Dublin, where a taxi could take them over the unmanned border into Northern Ireland.

Kurtaj touts for business on a Facebook page and, when asked whether it would be possible to get to Britain, said it would be ‘easy-peasy.’

He added: ‘I do Italian ID in Tirana [the Albanian capital].’

He said that after flying to Bergamo airport in Italy and then on to Ireland, ‘they get into a taxi from Dublin to Britain and that will cost you £2,000’.

Kurtaj, who has footage of a zombie knife and gun on his Instagram page, warned the undercover reporter: ‘This conversation has to be between us.’ 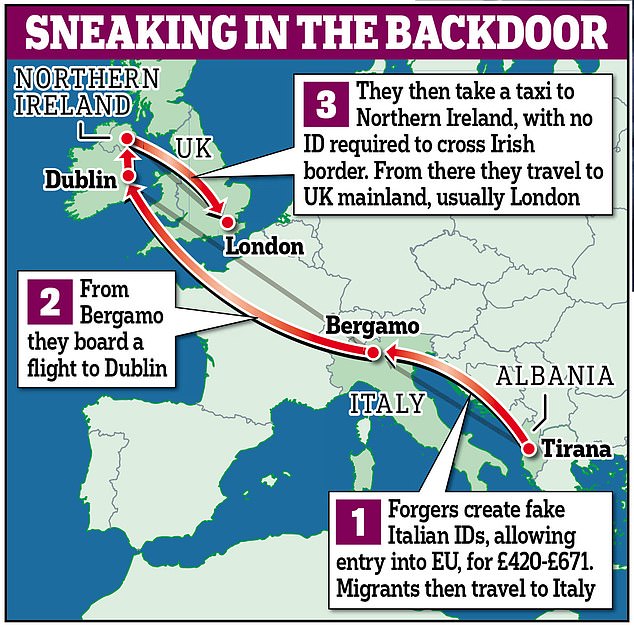 Operating from the UK, they arrange for illegal migrants to come here via European airports and boast that it is as simple as opening a front door

He also said traffickers have started using a route for women and teenagers to fly from France to Luton, because ‘nobody asks many questions’.

‘The main problem is passing Albanian passport controls. After you’ve left Albania, the rest of the journey will all be good,’ he said.

‘Girls pass like opening the door of a house.’

Kurtaj explained that his role was helping arrange the fake Italian IDs, which cost between £420 to £670, and are made by forgers in Albania.

‘I will send one of my people in Tirana to meet you,’ he said.

‘You only have to give them three photos for ID, in a letter write the colour of your eyes and how tall are you. At the same time, you have to give them the money. Then, after one to three days, the ID will be ready. When you are ready, just write to me.’

At one point during the Facebook conversation he insisted on a video call so he could see the undercover reporter’s face and location. However, he kept his own face hidden.

But he later agreed to meet reporters posing as relatives of would-be customers in a busy London street. When confronted, he denied all knowledge of the Facebook conversations and switched off his phone.

The Mail has passed his details to the authorities.

Tory MP Philip Davies said: ‘This is shocking and exposes clear weakness and loopholes in our system. It is completely unacceptable and a massive concern to the British people. He is completely brazen – advertising on Facebook shows he doesn’t fear the consequences.’

DUP MP Ian Paisley said the UK should put pressure on the Irish authorities. ‘We can’t stop the problem if they don’t close the door,’ he said. 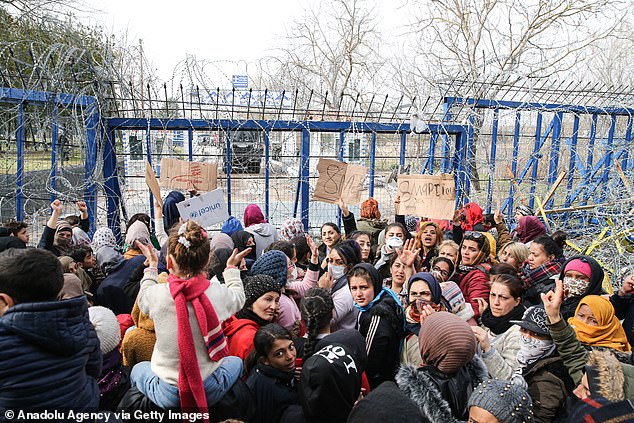 The shocking expose comes as a new migrant crisis sweeps Europe and people smugglers cash in on those fleeing their homelands. Asylum seekers are pictured above at the Turlish border with Greece

Irish sources told the Irish Independent newspaper last year that ten Albanians a day were arriving with false identify documents, most travelling on flights from other EU countries.

According to the National Crime Agency, Albania is the biggest foreign source of people trafficking in the UK, with 947 cases referred to it in 2018 – a rise of more than 50 per cent since 2015.

But that is just those who are caught, with the true figure believed to be much higher.

A Home Office spokesman said 100 traffickers were jailed for a total of 320 years last year, adding: ‘We look for every opportunity to gather evidence and intelligence to disrupt and bring to justice these criminals.’

An NCA spokesman said: ‘People smugglers treat migrants as a commodity and exploit their desperation.

‘We are working closely with our law enforcement partners both here and overseas to target those people smuggling networks impacting on the UK.’

Stock Market America is booming. So is Unemployment America