Bamako: Former Mali foreign minister Moctar Ouane has been name the country's interim prime minister, state television said, a move likely to trigger the lifting of sanctions imposed by the West Africa regional bloc in the aftermath of the military coup last month.

The sanctions have caused imports to the landlocked country to slump 30 per cent. The Economic Community of West African States (ECOWAS) said on Friday it would lift sanctions once a civilian leader was named. 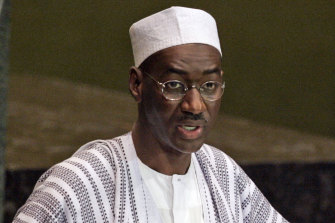 It had softened initial demands that a purely civilian leadership be installed, and the appointment of Ouane comes two days after retired colonel Bah Ndaw was sworn in as president, and coup-leader Colonel Assimi Goita as vice-president.

International powers feared the coup would further destabilise the country and undermine a joint fight against Islamist insurgents there and in the wider Sahel region.

The men will be tasked with overseeing an 18-month transition back to civilian rule after the August 18 overthrow of President Ibrahim Boubacar Keita.

Ndaw, a retired colonel and former defence minister, signed a decree authorising Ouane's selection, which the M5-RFP coalition of opposition groups welcomed, even though he was not their first choice.

"The M5-RFP must be willing to focus on the struggle, the reforms, the transparent elections, the crisis in the north and the centre… to support men capable of bringing the country out of this crisis," said Nouhoum Togo, the group's spokesman.

How can we demand all Brits to wear masks when our NHS workers are going short? – The Sun

UK coronavirus death toll passes 12,000 after 778 more patients die including 58 who were healthy – The Sun