Italy sees number of new coronavirus deaths rise and infections tally increase by more than 4,000 for the first time in four days, lowering hopes the illness is in retreat

The daily tally of cases was the highest since April 5, and comes as a disappointment to a country in lockdown since March 9, anxious for clear signs that the illness is in retreat.

The total death toll since the outbreak came to light rose to 18,279, the Civil Protection Agency said, the highest in the world.

The number of confirmed cases climbed to 143,626, the third highest global tally behind those of the United States and Spain.

There were 3,605 people in intensive care on Thursday against 3,693 on Wednesday — a sixth consecutive daily decline offering some good news despite the climb in new cases and fatalities.

Of those originally infected, 28,470 were declared recovered against 26,491 a day earlier. 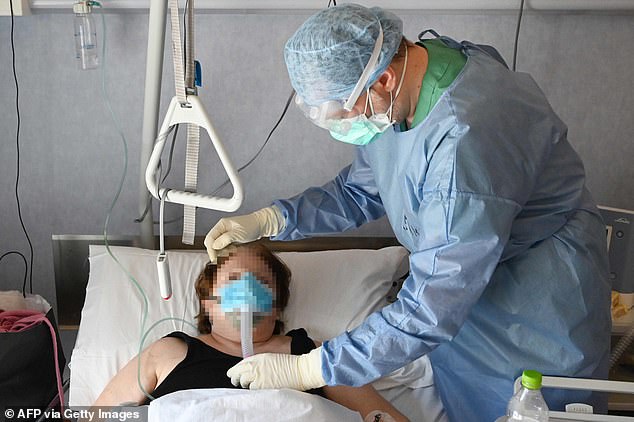 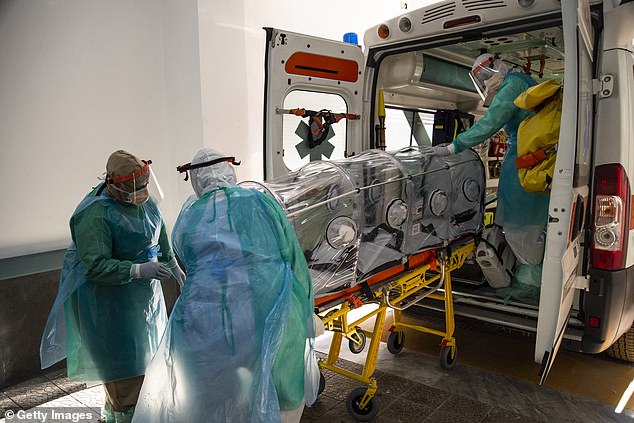 The Italian government on Thursday won a confidence vote in the Senate on an emergency decree that lays out measures worth 25 billion euros ($28 billion) to support the economy battered by a severe COVID-19 outbreak.

The package, dubbed the ‘Heal Italy’ decree and presented by Prime Minister Giuseppe Conte on March 16, suspends loan and mortgage repayments for hard-hit companies and families via state guarantees for banks.

Among other measures, it also increases funds to help firms pay workers temporarily laid off as a result of a lockdown imposed by the government to try to curb the spread of the coronavirus disease.

The ruling coalition dominated by the anti-establishment 5-Star Movement and the centre-left Democratic Party won the Senate motion by 142 votes to 99.

The decree was contested by the opposition, spearheaded by Matteo Salvini’s right-wing League party, which said the package was insufficient and bedevilled by bureaucracy which made it hard for people to access the funds available.

Since the March 16 initiative, the government has presented two more decrees aimed at helping the most needy with basic provisions, and offering guarantees to banks to try to ensure that credit and liquidity to companies does not dry up 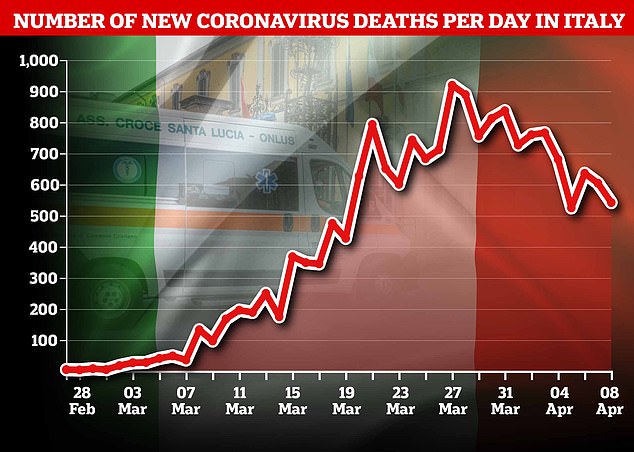 A graph showing the daily death toll from coronavirus in Italy up until April 8, which has been consistently falling since March 27 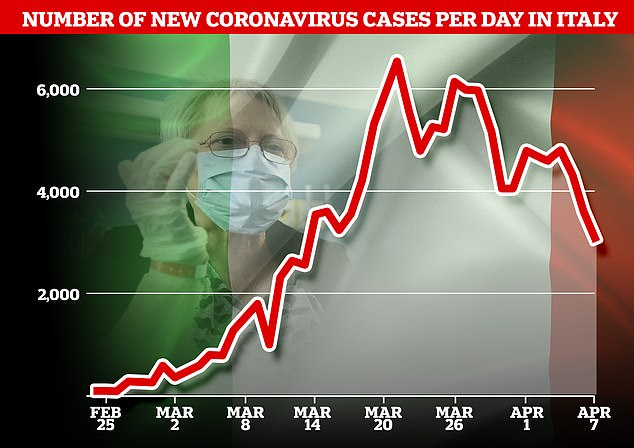 A graph showing the number of new coronavirus cases recorded each day in Italy, which has been falling since late March amid signs the virus has peaked

Madrid and Rome are also seeking assistance from EU partners to rebuild their economies in the wake of the disaster, but Germany has rejected the idea of joint borrowing and the Netherlands is blocking a compromise solution.

EU finance ministers were to meet later Thursday by videoconference for the second late-night crisis talks of the week to try to agree terms to allow hard-hit members to access funds.

‘If we do not seize the opportunity to put new life into the European project, the risk of failure is real,’ Italian prime minister Giuseppe Conte told the BBC, suggesting the very future of the EU was at stake.

Christine Lagarde, the head of the European Central Bank, said it was vital the ministers hatch a plan big enough to meet the challenge, warning: ‘If not all countries are cured, the others will suffer.’

European companies are also suffering under a public lockdown, which health experts say is vital to slow the virus’ spread but has effectively frozen economic life.

In one example, German airline Lufthansa warned it was losing one million euros ($1.08 million) an hour and would need state aid.

The coronavirus slump has also exacerbated the instability in world energy markets, and on Thursday top oil producers from OPEC like Saudi Arabia and its OPEC+ partners, including Russia, met to discuss cutting production to boost prices.

The World Trade Organization has warned of the ‘worst recession of our lifetimes.’ 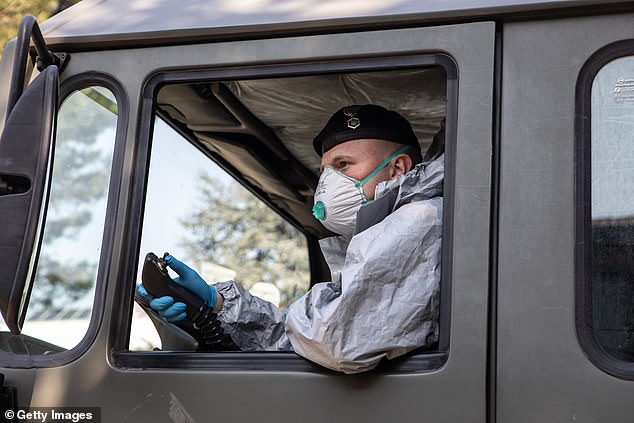 An Italian Army officer from a unit specializing in biological defence offloads supplies at a nursing home in Torre Boldone, Italy 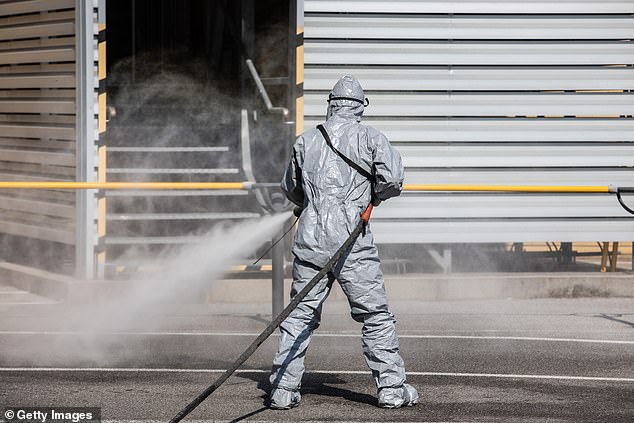 A soldier from a biological weapons unit uses a hose filled with disinfectant to clean the parking lot of a nursing home in Torre Boldone, Italy 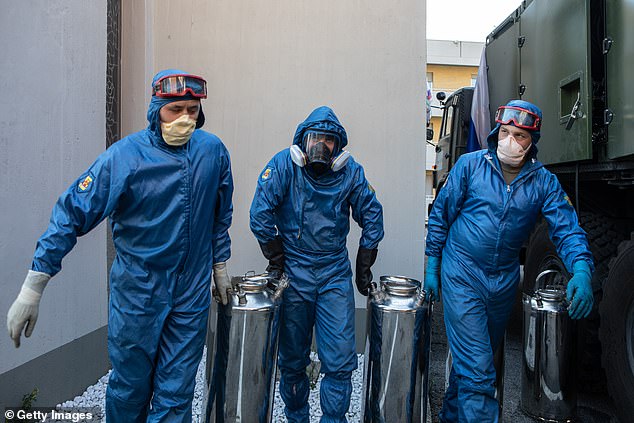 Three officers from the Russian army, which has been drafted in to help Italy, carry three containers filled with ethanol to disinfect a nursing home in Torre Boldone

The worst-hit countries in Europe – the worst-hit continent – are Italy and Spain, where daily death tolls are now down from their peaks but still running high, despite strict lockdowns.

In Italy, the country’s youngest COVID-19 patient, a two-month-old baby girl, was reportedly released from hospital, a moment of hope in a country with 17,669 dead.

Italy’s epidemic has turned life in the country upside down, but also brought out acts of generosity from the likes of Sister Angel Bipendu, a nun and a doctor who distributes medical care alongside spiritual succour.

She tries to remain optimistic, despite the ravages of the coronavirus reminding her of earlier epidemics in her former central African homeland, the Democratic Republic of Congo.

‘I think of my Congo, where sick people will also die of hunger,’ the 47-year-old told AFP as she made home visits in Bergamo province, epicentre of Italy’s outbreak. ‘I’m afraid of not being able to do everything I have to do. Fear of being infected? Absolutely not.’

One hundred Italian doctors, Sister Bipendu’s colleagues, have died in the outbreak, according to their health association.

Acting DNI Richard Grenell stepping down as US ambassador to Germany

Jennifer Lopez Says She Learned How to Hustle from Her Parents

Man crushed to death on a busy highway in freak accident

‘The Vast of Night’ review: Indie breakout gives you hope for sci-fi