This was the scene of a horror crash in north London last night, which killed an elderly taxi driver in his 80s.

The collision, which took place on the A5 at Hyde Estate Road in Colindale around 9pm on Saturday, involved the London black taxi and a large white minibus.

Pictures emerging from the scene showed the twisted remains of the black taxi, which suffered extensive damage to the front of the vehicle. 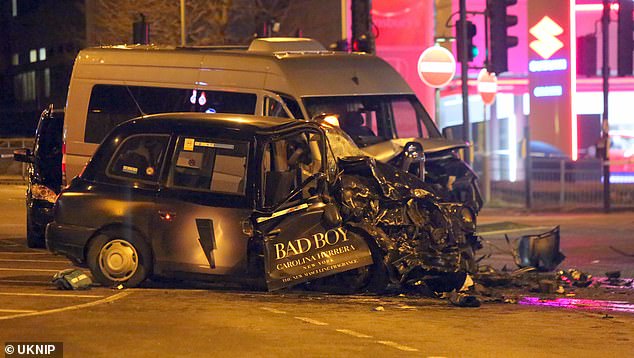 The white minibus, positioned next to the taxi, also showed evidence of damage to the front.

In the aftermath of the collision, Met Police said the victim’s next of kin had been informed and a post-mortem examination would take place in due course.

No arrests had been made and enquiries are continuing.

Metropolitan Police Barnet posted a tweet at 10.45pm on Saturday night about the incident.

It said:  ‘We are working at the scene of a collision between two cars in Hyde Estate Rd, #Colindale NW9.

Meanwhile, a woman who witnessed the crash said she ‘missed death by two seconds’.

Speaking to MyLondon News, the woman, who wished to remain anonymous said:

‘I was at the scene when the crash happened. I missed death by two seconds.

‘If my car and the car in front and behind me didn’t have the fast reaction that we had it would have been us.’ 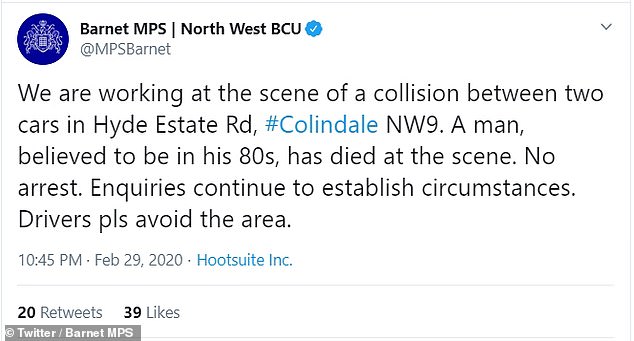 In an updated statement on Sunday, Met Police said: ‘Police were called to a two vehicle collision on Hyde Estate Rd, NW9 just before 9pm on Saturday, 29 February.

‘His next of kin have been informed and a post-mortem examination will take place in due course.

‘No arrest. Enquiries continue to establish the circumstances.

What are DVLA’s rules for over-70s?

Once drivers reach 70, they must apply for a new licence every three years.

Motorists over 70 must complete a self-assessment every three years and declare they are in good enough shape to continue driving.

This involves simply filling in a form and there is no requirement to take a formal test or medical examination.

However, they must tell the DVLA if they develop a medical condition, such as Parkinson’s or epilepsy, that could affect their driving.

The DVLA can then arrange for a doctor to examine the driver, and will in some cases ask them to take a driving or eyesight test.

Motoring groups have resisted calls for restrictions or bans on older drivers, pointing out they have fewer accidents than young people who have recently passed their test. This is reflected in their lower insurance premiums.

But police and safety campaigners have raised concerns that some older drivers are in no fit state to get behind the wheel.

Key worries are failing eyesight, slower reaction times and conditions such as dementia.

Inside Andrew Cuomo’s history of ‘bullying’ both enemies and staffers

Arrow Spinoff, The 100 Prequel Still Under Consideration at The CW