Some of Australia’s biggest media companies have been fined a combined $1.1 million for breaching contempt of court laws over the way they first reported George Pell’s conviction on sex abuse charges.

The Age and The Sydney Morning Herald are among the news outlets to have pleaded guilty earlier this year to breaching a suppression order over the news reports they published in December 2018, in the days after a County Court jury found Cardinal Pell guilty. 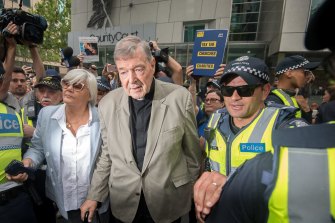 The reports did not name Cardinal Pell or detail his charges but referred to a high-profile person being found guilty of serious charges, when the cardinal was still awaiting another trial. That second trial was later aborted by prosecutors.

Cardinal Pell had his convictions quashed and was released from prison last year following a successful appeal to the High Court.

Supreme Court Justice John Dixon said on Friday some media companies took a “calculated risk” in publishing reports they ought to have known breached the suppression order, and that their breaches diminished the order’s “purpose and efficacy”.

“In doing so, the media respondents usurped the function of the court in protecting the proper administration of justice and took it upon themselves to determine where the balance lay between Pell’s right to a fair second trial … and the public’s right to know what happened in the [first] trial,” Justice Dixon said.

The media companies, which also include Sydney’s The Daily Telegraph, The Courier-Mail in Brisbane, Channel Nine’s Today program and radio station 2GB, pleaded guilty in February to a combined 21 charges as part of a plea deal that brought to an end a trial that began last year. Both Nine Radio, which owns 2GB, and Channel Nine are owned by Nine Entertainment Co, which also owns this masthead.

As part of the plea deal, prosecutors withdrew other charges against the news outlets and against 15 individual journalists, which included the editors of some of the nation’s biggest newspapers.

Following the jury’s guilty verdict at 3.44pm on December 11, 2018, The Age was the first news outlet to publish an article later deemed to have breached the suppression order, by publishing an online story on the evening of December 12, which came about 27 hours after the cardinal was convicted.

The following morning, The Age, The Sydney Morning Herald, The Daily Telegraph and The Courier-Mail all ran front-page stories about the case that were found to have breached the suppression order because they included information derived from Cardinal Pell’s trial.

County Court chief judge Peter Kidd had imposed the suppression order over Cardinal Pell’s case to ensure nothing was published about the first trial which would have prejudiced the accused man’s right to a fair second trial.

Judge Kidd revoked the suppression order in February 2019, when prosecutors dropped the second trial against Cardinal Pell, and that revocation allowed the media to report the guilty verdict made three months earlier, and details about the case.

Under fines totalling $1.108 million, The Age was fined $450,000 for pleading guilty to three charges of breaching a suppression order: each related to an online news article, the front-page version and an online editorial.

Salman Rushdie's daughter-in-law 'fought for her life' with Covid