“Buildings like this do not fall in America,” Surfside Mayor Charles Burkett told Fox News’ Tucker Carlson Thursday night. “This is a third-world phenomenon, and it’s shocking.”

He said the “disturbing” collapse was reminiscent of the fall of the Twin Towers in New York City following the Sept. 11, 2001 terror attacks, as far as the way the structure crumbled in moments. 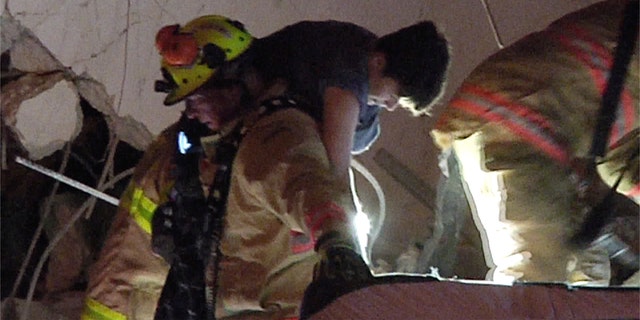 This photo taken from video provided by ReliableNewsMedia, firefighters rescue a survivor from the rubble of the Champlain Towers South Condo after the multistory building partially collapsed in Surfside, Fla., early Thursday, June 24, 2021.
(ReliableNewsMedia via AP)

Video shows two wings of the 12-story high rise tumbling out of the sky without warning around 1:30 a.m. Thursday.

It’s not immediately clear what caused the collapse, and Miami-Dade officials said they did not expect to have answers any time soon. Investigators were not expected to enter the rubble until the search and rescue mission had concluded.

It was still underway Thursday evening, and authorities said that rescuers using sonar equipment had picked up banging sounds that they hoped were signs of life.

At least one person died and 99 remained unaccounted for 16 hours after the collapse. More than three dozen people had been rescued, including a woman whose leg had to be amputated.

Burkett said “it’s frightening” to think how many more victims may have perished in the collapse. 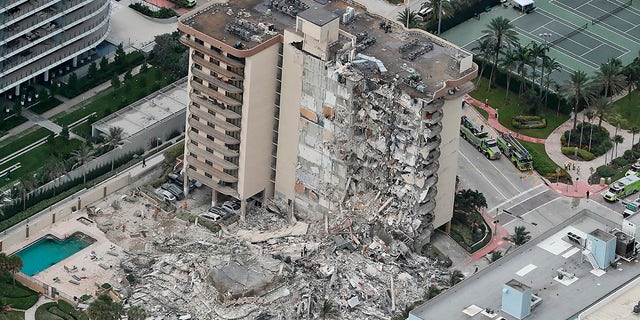 “Buildings need to be inspected much sooner than 40 years, especially in a county where sea level rise can affect a foundation,” state Sen. Annette Taddeo tweeted Thursday morning, following reports of a deadly collapse that left at least one person dead and nearly 100 unaccounted for.

“Although it will take time to know the specific reasons for the Champlain Towers collapse, a new roof was being installed, and something was missed by somebody,” the Miami Herald’s Fabiola Santiago argued in her latest column. “The city of Miami Beach and adjacent municipalities like Bal Harbour and Surfside, have their work cut out for them as their inspection departments will surely come under scrutiny — and they should. Buildings don’t fall for no reason.”

A 2020 study on sea level rise and sinking land in buildings in Miami, Florida, and Norfolk, Virginia, found that some structures in the seaside cities were losing about 1 to 3mm per year since the 1990s. Most of the risk was found on reclaimed marshlands.

Florida International University Professor Shimon Wdowinski, one of the primary researchers on that study, told USA Today Thursday that his team had looked at the Champlain Towers South building specifically, although it is not mentioned by name in the final product.

'Thor: Love and Thunder' Is Bringing Back Another Fan Favorite 'Avengers: Endgame' Star