A Michigan man dropped his pants and bared his bum in front of the female judge during a bond hearing after he was accused of hurling anti-Semitic slurs outside a temple.

He was in court on Tuesday for a separate charge that included resisting arrest.

Chokr went before Wayne County Judge Regina Thomas, the same judge that released Chokr on bond two and a half years ago over a felony case in Dearborn, that bond in Wayne County has since been revoked. His new bond in Oakland County is set at $1 million, ClickonDetroit reported.

The suspect went on a series of tirades, first flipping the judge off with his middle finger on Monday and then mooning her on Tuesday which took place during the virtual emergency bond hearing.

During the hearing, Chokr, who was being held at Orange County Jail, refused to acknowledge his name and said he ‘pleads the fifth,’ before becoming irate – yelling and pointing at the camera – and prompting the judge to mute his microphone.

‘Now he has removed his pants to show the court his backside,’ says the judge who appeared to keep her composure: ‘I am putting him in the waiting room.’ 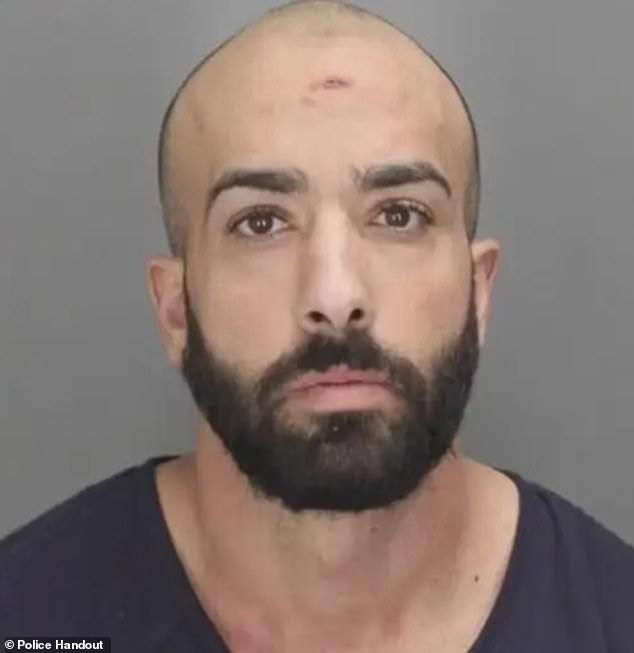 Hassan Chokr, 35, who was charged with ethnic intimidation, was in court on Monday to see Judge Regina Thomas for a separate charge that included resisting arrest 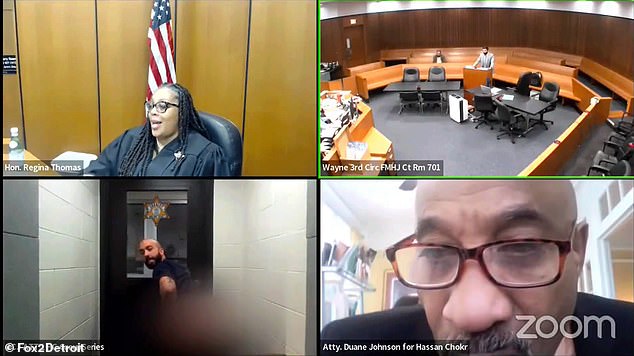 During the bizarre virtual emergency bond hearing, Chokr refused to acknowledge his name, and says he ‘pleads the fifth,’ before becoming irate – yelling and pointing at the camera – and prompting the judge to mute his microphone

Bloomfield Township Police Chief James Gallagher described Friday’s incident saying ‘Chokr did not discriminate on who he was going to talk to in that parking lot,’ the news outlet reported.

‘There were moms and dads walking their kids into school and he was using some of the most vulgar, inappropriate language and comments I’ve ever heard,’ Gallagher said.

Oakland County Prosecuting Attorney Kathleen McDonald said, ‘I can’t imagine what that must have been like for parents and small children of preschool age to be approached by someone with so much hate.’

In one of his Instagram posts, the defendant says ‘Your Jew tactics will only backfire on you, you have no place on this earth, Jew (expletive) Jew mother (expletives). A storm is coming to wipe you all out of our lives,” the prosecutor said.

Chokr’s attorney Duane Johnson proclaimed that his client was expressing his First Amendment rights of freedom of speech.

Judge Thomas questioned Chokr’s mental state declaring that he ‘seems to be mentally ill quite frankly,’ even sharing her concerns about him being out in the community.

‘I don’t know why anyone would think it is appropriate to pull down his pants and show the court their behind during a court proceeding,’ she said. 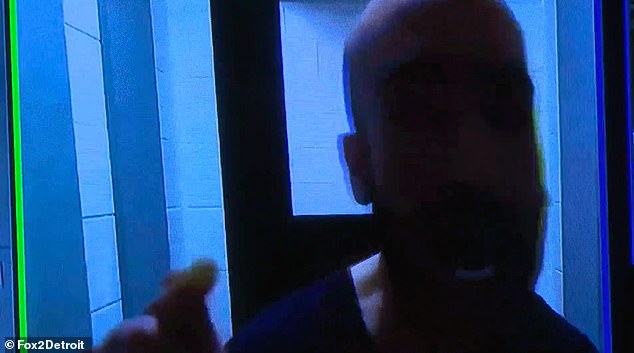 During the hearing, Chokr refused to acknowledge his name, and said he ‘pleads the fifth,’ before becoming irate – yelling and pointing at the camera – and prompting the judge to mute his microphone 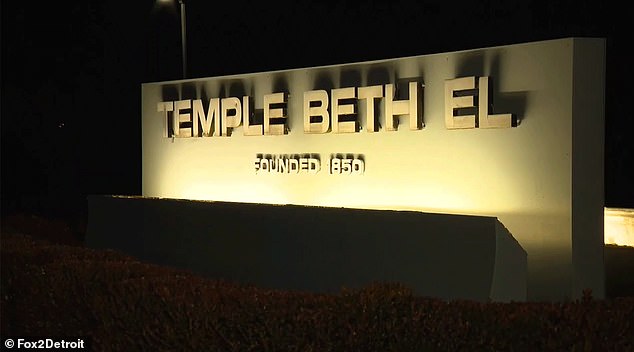 ‘We are free to say whatever we want to say but we are not free from the consequences. So if we are doing things that are unsafe and we are infringing on other people’s rights, we don’t get to do and say anything we want to without the consequences of those actions. That’s where your client finds himself today.

‘He exercised his right and I am exercising my right to give him a consequence for that. Nothing that any of us do in this life is without consequence.’

Chokr had been released on a $10,000 bond in a case where he ended up charged with assault with a deadly weapon and assaulting a police officer, a report said.

In that case, Chokr, who was armed, had an outburst at the Islamic Center of America on Ford Road, before allegedly assaulting a female volunteer and being chased by police. The case has not gone to trial yet.

QAnon-supporting Republican congresswoman, 33, asks if she can openly carry her firearms on Capitol Hill