This is the hilarious moment two hungry monkeys were fooled by a glass windshield while they tried to get their hands on a packet of biscuits sitting on the dashboard.

The hapless primate duo were caught thinking they’d found an easy snack, but didn’t realise that they were separated from the biscuits by glass.

They persistently try to grab the packet before one of them sticks its mouth on the windscreen.

The pair then fall over and start whacking and pushing each other before having another go at grabbing the biscuits.

The monkeys – filmed in Andhra Pradesh, southern India – are then ushered away by the driver.

One of the monkeys then stared aggressively at the man filming the incident before turning his attention back to the Marie Gold biscuits.

In the end the driver gave the monkeys the biscuits when they tried to rip off his windscreen wiper. 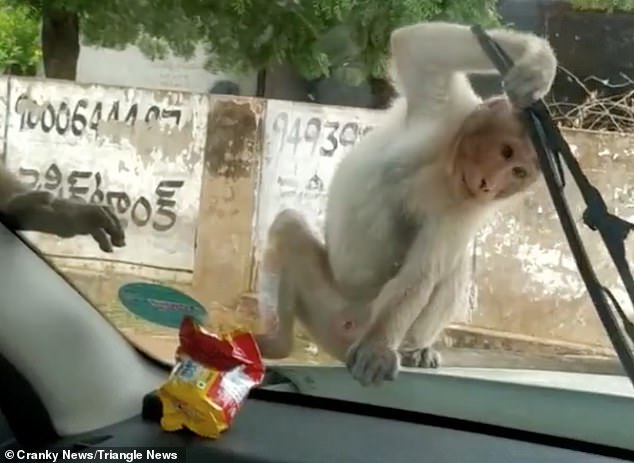 The man said: ‘They tried to grab the packet of Marie Golds but failed after repeated attempts.

‘It was quite amusing to see the infuriated apes trying to grab the packet of biscuits.’

‘In the end, they accepted their failure and moved away from the windscreen and grabbed the wipers.’

‘Scared that it could damage the wipers in aggression, I opened my window glass and gave away the biscuit packet.’

Joe Biden is formally nominated as Democratic candidate for president

Journalist says Prince visited him to ‘gobble’ supply of Percocet