The coronavirus death toll across the state of New York has risen by 562 in just 24 hours, bringing the total number of victims to 2,935, and the number of infections has gone past 100,000.

Gov. Andrew Cuomo revealed the startling new figures at a press conference on Friday morning where he pleaded with the other states to send help before the pandemic peaks.

More people have now died across the state of New York as a result of the coronavirus than were killed in New York City in the Twin Towers attacks on 9/11. That day, 2,753 died in New York and an additional 224 died in the attacks on the Pentagon and on United Flight 93.

Gov. Cuomo said on Friday that the only ‘logical, practical’ plan was for the country to enact a rolling deployment of resources to the regions that need it when they need it.

Since New York is ‘the first encounter’, he is asking for help to be sent his way now but said he will return the favor if and when the crisis in his state is over. 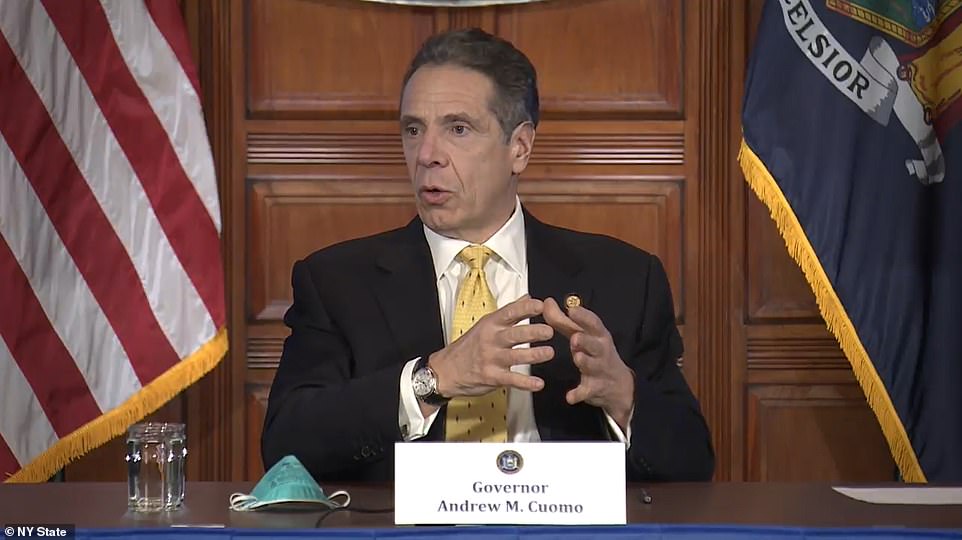 NY Gov. Andrew Cuomo said on Friday that the number of cases and deaths continue to rise despite ongoing mitigation efforts 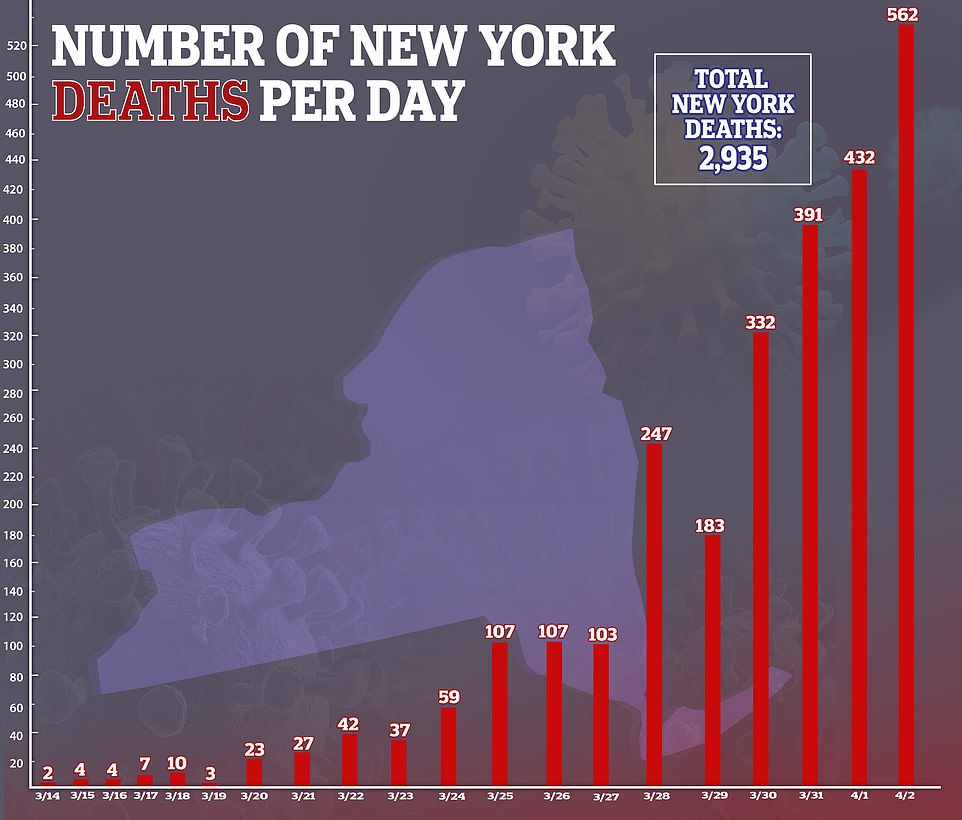 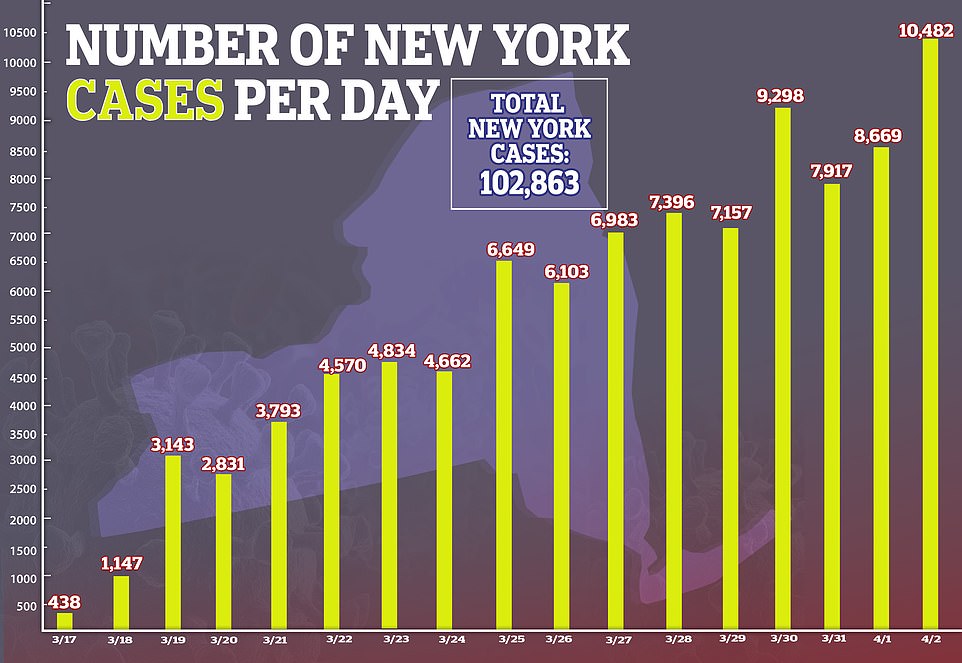 He has signed an executive order which allows him to take excess ventilators from hospitals that do not have a surge in coronavirus patients and redeploy them to any that are overrun by cases.

Cuomo said he knows individual hospitals will not like the order, but that it is what must be done to avoid people dying ‘because we didn’t share’.

He has promised to either return the ventilator once to the hospital it was taken from or reimburse them for it. His strategy hinges on the proviso that different localities will hit their peaks at different times.

‘I understand they don’t want to give up their ventilators. Ventilators are expensive pieces of equipment…but I don’t have an option and I’m not going to get into a situation where we know we’re running out and we could have people dying because there are no ventilators but there are hospitals in other parts of the state that have ventilators they are not using,’ he said.

Asked whether he was worried some of the hospitals could sue him for the order, he said: ‘It’d be a slow day if I didn’t get sued five times but if they want to sue me for borrowing their excess ventilators to save lives, let them sue me.

Cuomo used the analogy of borrowing someone’s drill to illustrate his point.

‘Lend me your drill. I will bring it back to you or I will buy you a new drill. How do you lose ? I’m not taking your last drill. You have five other drills in your toolbox.

‘You’re not going to to use use drills between then and if something happens where you go on a drilling frenzy? Call me and I’ll bring you more,’ he said. 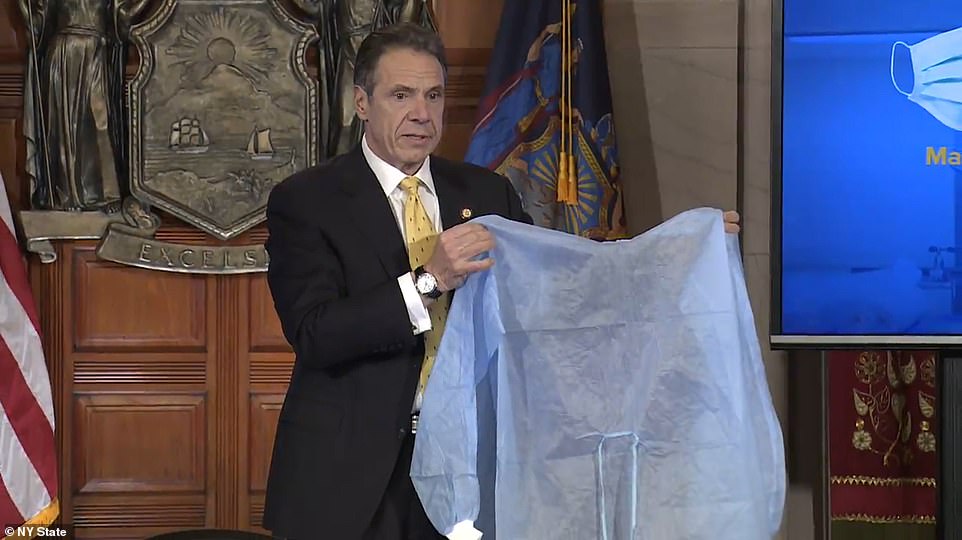 Cuomo is asking companies with manufacturing capabilities in the US or in the state to start making medical gowns, surgical masks and gloves for the healthcare workers that need them. He says he will pay them a ‘premium’ for them if they can make them on time 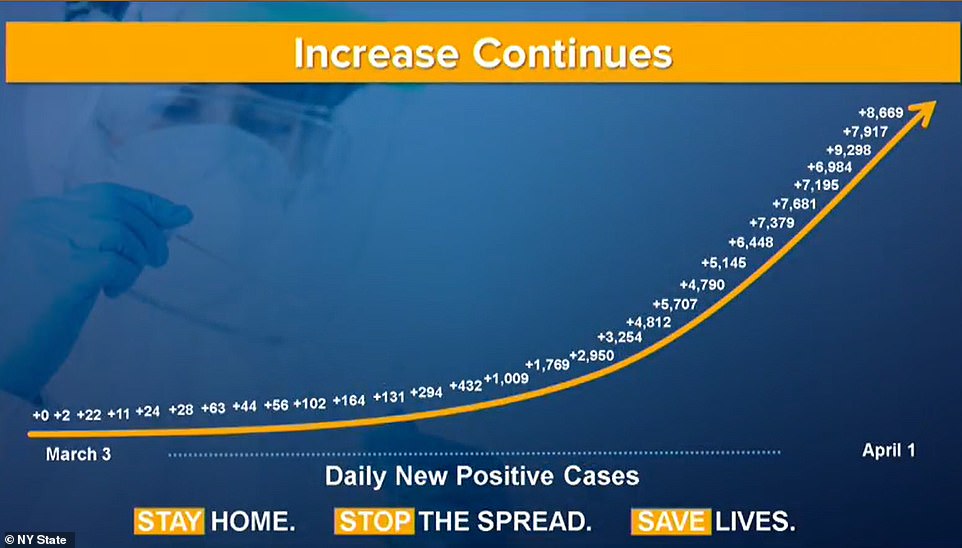 Nationally, he said there will be instances of two cities hitting their apexes at the same time but that largely, the spread will be staggered.

‘It depends on when the outbreak started in that region, so you have different curves in different parts of the country occurring at different times.

‘The only practical solution at this point is focus on the emergency that is in front of you.

‘Focus on the emergency at the place and time that is in front of you and then redeploy to the next situation so New York is the tip of the spear so to speak, we have the high numbers, the first major encounter.

‘Deploy resources to New York – we’ll hit that curve, we’ll be at the top of the curve [in] 17 days, 21 days, we’re on the other side and we’re coming down and then I don’t need the ventilators we’ve amassed. We can re-deploy what we have to whatever locality is next.

‘It’s not a perfect sequential timing but if you look at the projected curves when it’s going to hit Michigan, Illinois, Florida, you’ll see there is a timing sequence to it. Why not? What is the alternative to now saying: “lets help each other. Lets focus on each situation as it develops and move our resources and personnel as it develops.

‘What is the alternative to the crisis that we have looming nationwide?’

He went on to say that America was a ‘family’ and that as ‘brothers and sisters’, it was in the ‘DNA of America’ to show up to help one another.

He lauded the 20,000 out-of-state healthcare workers who have volunteered to come to work in New York City’s hospitals, and promised his workers would do the same elsewhere in the country if needed.

Cuomo also thanked the president for changing a policy which dictated that the Javits Center, a 2500-bed field hospital, would not take coronavirus patients. 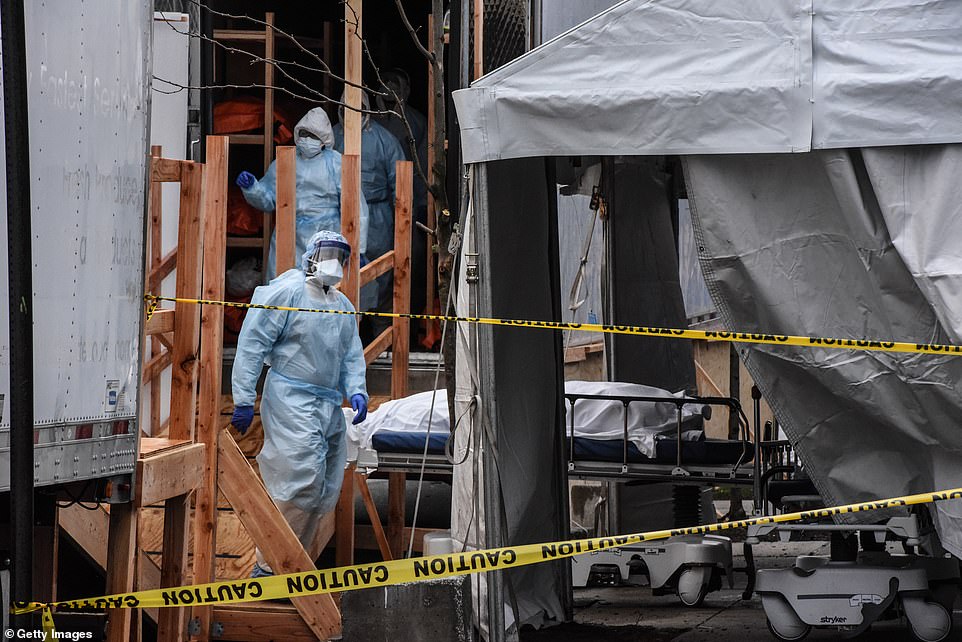 Dire: Medical workers move a body into a refrigerated mobile morgue at the Wyckoff Heights Medical Center in Brooklyn 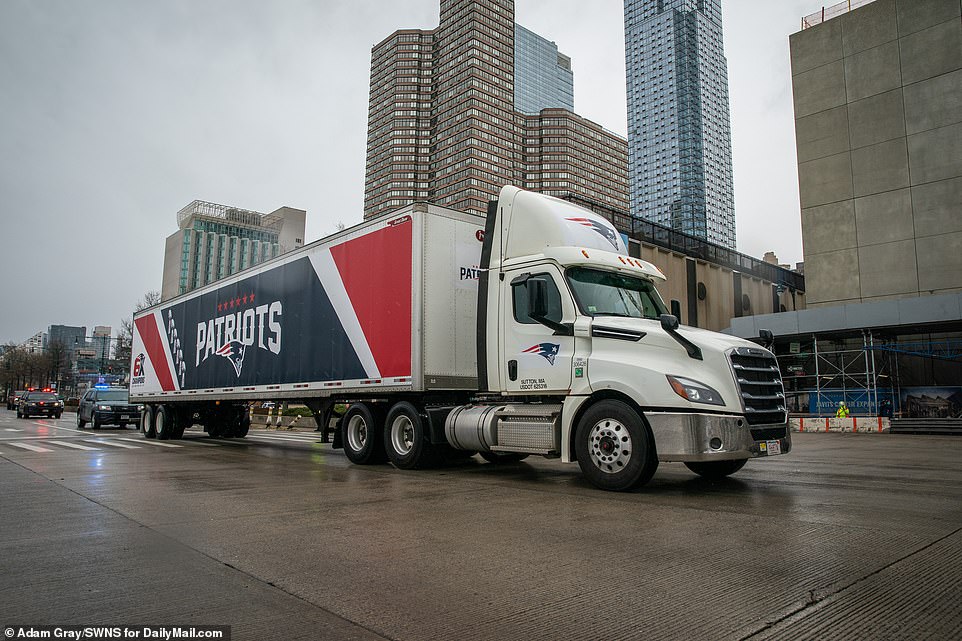 The New England Patriots have donated masks to the Javits Center, a 2,500 bed facility for coronavirus patients 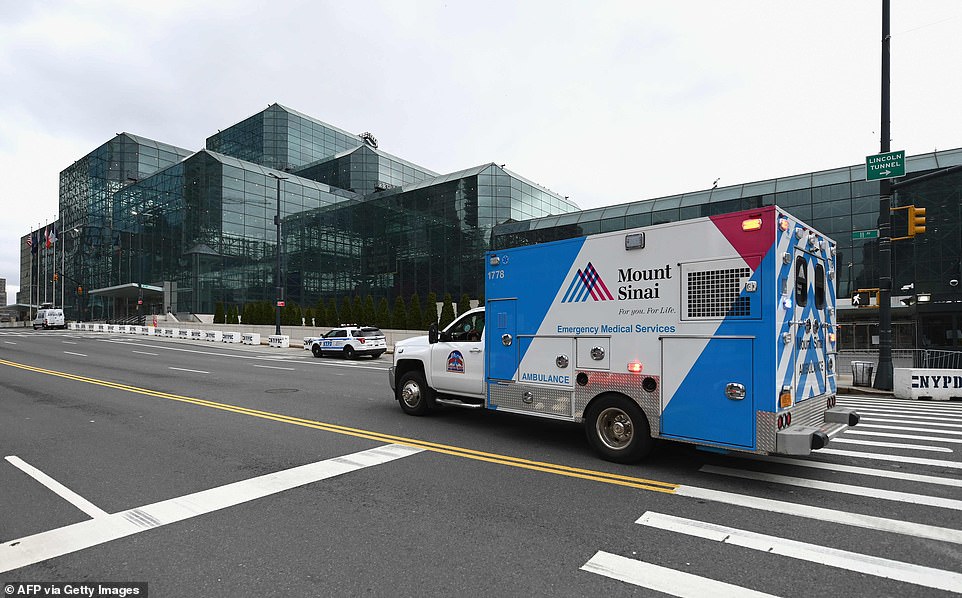 Now, people who have been diagnosed with COVID-19 will be treated there. FEMA initially refused it. Trump overruled them yesterday.

Cuomo also said that he planned to speak to the Defense Secretary to learn more about why the USNS Comfort, a Navy hospital ship which docked in New York on Monday, was not taking COVID patients either.

The vague answer has been that it will be too difficult to disinfect the ship afterwards so they do not want the virus ever coming on board.

On Thursday night, it was revealed that the Navy issued a list of 49 other health conditions it said the Comfort would not be used to treat.

With hospitals now operating as largely COVID-only facilities, there are few other patients to take care of.

Cuomo said he planned to address it today.

‘I did not speak to the president about the Comfort. The original agreement was it was for non-COVID people.

‘The Navy’s position is they don’t want to put COVID people on the ship because it would be too hard to disinfect the ship afterwards. That’s my rough interpretation of what they’re saying.

‘The need is for COVID patients. I don’t know the science of ship disinfecting to know whether or not they’re being overly dramatic,’ he said.

Cuomo said that the crisis was ‘hard’ to deal with, particularly as the number of deaths and cases continues to rise.

‘This is hard. It’s hard to go through this all day and then it’s hard to stay up all night watching those numbers come in and you know that you’re in charge of the ship at this time. I don’t shirk that responsibility at all.

Mayor Bill de Blasio has earmarked Sunday, April 5, as ‘D Day’, saying if more supplies do not come in before then or if more staff do not arrive to ease the burden on hospitals, the consequence could be hundreds of deaths.

How to sleep: Drink this with your evening meal to improve sleep quality

Heart attack symptoms: The change in your mood that could signal the deadly condition

Selena Gomez Heading Back To TV In Hulu Comedy with Steve Martin!