Victoria and NSW are still facing increasing bushfire risks this summer due to the growing likelihood of severe grass fires, despite recent wet weather and the vast amount of fuel burnt out by the Black Summer blazes a year ago.

Above-average rainfall has brought a welcome flush of green, watered the parched soil and replenished grass on the rangelands and pastures from northern Victoria, the Riverina and right across NSW, which had been stripped bare by years of drought.

But the east coast is not out of the woods, and with so much grass and fuel across the country, a run of several hot days will still bring extreme fire danger warnings. 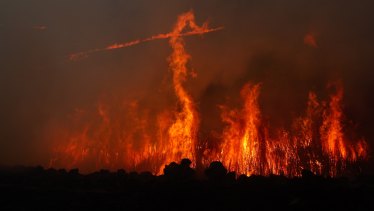 "As we've seen in the past couple of weeks, it doesn't take many days in a row of hot temperatures to get grass fires running," Bushfire and Natural Hazards Co-operative Research Centre chief executive Richard Thornton said.

"The grass will brown off, which makes them available to burn, as we've seen in South Australia, Western Australia and Melbourne recently. I'm sure we'll see total fire bans across most jurisdictions this year."

"Periods of weather which provide high fire risk are normal and likely in any season even when the rainfall is above average," Professor Howden said.

"In Victoria people expect the summer to bring grass fires and even in a normal year we can have a significant one," Mr Slijepcevic said.

Last week residents at Taylors Lakes in Melbourne's north-west evacuated their homes as a grass fire, spurred by hot weather, swept towards them before being brought under control without property loss.

"This is one of the most bushfire-prone areas in the world and there is no room for complacency. People need to know their emergency plans, and maintain clearance (of fuel) around their house," Mr Slijepcevic said.

NSW Rural Fire Service spokesman Greg Allan said the return of pasture growth has been welcome, but it's also meant grass fires are now "our major focus for the summer".

One factor behind the high volume of grass in NSW is that livestock numbers are at their lowest in decades after years of drought.

"While many people may have seen a bushfire before, grass fires can burn three times faster and become quite dangerous," Mr Allan said.

The fire agencies urged people to refresh their bushfire emergency plans, including downloading the emergency warning smartphone apps from the Victorian Country Fire Authority, or the NSW RFS Fires Near Me.

"Grass fires are not as intense as a raging forest fire, but they can be lethal," Dr Thornton said. "The throw embers ahead of the fire and can cause properties to burn too."

Facility for teen immigrant girls in Houston being closed

Ex-vicar, 81, moves to Romania with his toyboy lover, 27, and pays for his clubbing with Church of England pension – The Sun

This Week In Trailers: The Vigil, The Misadventures of Hedi and Cokeman, Long Live Rock…Celebrate The Chaos, Happily, Slalom – /Film

Humiliated Macron faces vote of no confidence after election 'tsunami'