Melbourne has been drenched by 'waves' of rainfall overnight and there is more on the way today in what is forecast to be the wettest day this week in the lead up to Christmas.

By 7am on Tuesday, Melbourne's main rain gauge had recorded 31.6mm so far for December. The monthly average for December is 51mm. More rain and thunderstorms are expected later today.

A severe weather warning remains in place for Central and parts of South West, North Central, and West and South Gippsland forecast districts for heavy rainfall and isolated thunderstorms today – plus the risk of flash flooding in some areas.

Most suburban parts of Melbourne have seen around 20mm of rainfall since 9am Monday. The highest state-wide totals were seen at Cape Nelson (42.8mm), Portland (39.6mm) and Port Fairy (35.4mm).

Among the soggiest suburbs of Melbourne by Tuesday morning were Frankston (29mm), Rowville (26mm) and Moorabbin (24mm).

Tom Delamotte, a duty forecaster at the Bureau of Meteorology, said rain had been persistent all night in Melbourne. Some particularly heavy patches moved through in waves across the city.

He said while rains had eased in the metropolitan area by sunrise the worst of the rain, and possible thunderstorms were yet to come today.

"We do expect just a few showers through much of the morning into the early part of the afternoon. There could be a thunderstorm or two around as well," he said.

"And then as we move later into the afternoon we're likely to see a period of fairly persistent rain across the Melbourne area as the winds turn around into a south-westerly direction." 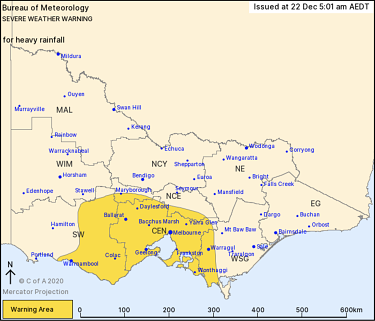 The severe weather warning affected area on Tuesday.Credit:Bureau of Meteorology

Melbourne, Geelong, Ballarat, Maryborough, Bacchus Marsh and Warnambool are all expected to be the most affected by the severe weather warning on Tuesday – and most suburban areas are expected to see another 15mm to 25mm fall by the end of the day.

"There could be some localised areas that get 35 mm more today," Mr Delamotte said.

The rain is not expected to clear until later in the week.

"But it does look like it clears up for Christmas Day and then after that our next chance for some rain is on Sunday as a front moves in."

Boxing Day will be "quite pleasant" according to Mr Delamotte, with no rain and a forecast top of 28 degrees.

Melbourne is experiencing a wetter than average year, with 776mm falling in the city so far year – far above the average of 518mm, according to the BOM.

Catch all the day’s headlines

At the end of each day, we’ll send you the most important breaking news headlines, evening entertainment ideas and a long read to enjoy.  Sign up here.

Stacey Abrams: "We Spent The Last Year In One Of The Lower Circles of Hell"

The Masked Singer: Badger ‘exposed’ by This Morning’s Phillip as he hints at Holly stint

Cole Sprouse Rides His Bike Around His Neighborhood