Riley June Williams, the 22-year-old Pennsylvania woman facing several federal charges for her alleged involvement during the Jan. 6 Capitol riot, including theft of government property and obstruction of a government proceeding, is attempting to cover her tracks online.

A Department of Justice prosecutor said during a court hearing on Monday that the government is aware that Williams has allegedly been “deleting her own accounts online and switching devices” and that they’ve been given “indications she was instructing other people to delete messages as well.”

It’s unclear what evidence Williams is allegedly trying to destroy or encouraging others to destroy.

WHERE IS THE LAPTOP STOLEN FROM NANCY PELOSI’S OFFICE?

Williams, who was arrested on Jan. 18 in Harrisburg after surrendering to authorities, appeared virtually in a Washington court Monday.

Williams faces two misdemeanor charges associated with her actions at the Capitol, as well as at least two felonies, which carry the potential for up to 20 years in prison.

Williams has been relased to the care of her mother pending trial. The government asked federal Magistrate Judge Zia Faruqui to order that Ms. Williams remain confined to her home, and prevent her from any access to the internet. A public defender representing Ms. Williams told the court that she does not currently have access to a computer or a smart phone.

According to charging documents from the Department of Justice, prosecutors say that Williams’ ex-boyfriend identified her in video footage of the Capitol riot, which has since been removed by YouTube for violating the platform’s community guidelines.

According to prosecutors, she can be heard in the video repeatedly yelling, “Upstairs, upstairs, upstairs,” and can be seen physically directing other intruders to proceed up a staircase into the Capitol Building.

The ex-boyfriend also claimed to have spoken to friends of Williams, who showed him video of Williams taking a laptop or computer hard drive from House Speaker Nancy Pelosi’s office and that Williams intended to send the computer device to a friend in Russia, who would then sell the device to SVR, Russia’s foreign intelligence serivce. 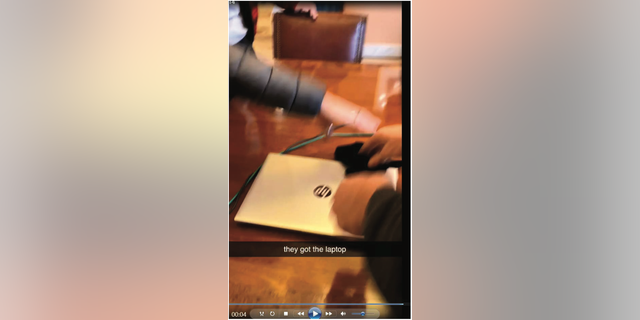 Photo courtesy of Department of Justice

In one 4- second video, Williams appears to be holding a cell phone which is aimed down toward a wooden desk with an “HP” laptop. A female voice, believed to be Williams, is heard saying “Dude, put on gloves” before a man’s arm appears to take the laptop. Text then appears across the video which allegedly reads: “they got the laptop.”

Williams’ identity was verified by comparing the video to CCTV footage showing her leaving Pelosi’s office with the laptop.

In addition, another individual shared similar posts believed to be from Williams, including posts on the social media platform Discord from an individual named “Riley”, in which she states, “I stole s**t from Nancy Poles,” and “I took Polesis hard drives I don’t care kill me.”

The ex-boyfriend also told prosecutors that the transfer of the device to Russia “fell through for unkown reasons,” noting that Williams “still has the computer or has destroyed it.”

A follow-up hearing has been scheduled for Tuesday morning at 10:30 a.m.

Williams’ arrest is one of dozens since the Capitol riot took place. The Jan. 6 attack left five people dead.

Minneapolis protesters start dance party while waiting to be arrested

Murders and shootings are up in New York City, and it’s not just a ‘spike’, analyst says: ‘We’re in uncharted waters.\