New York: US President Donald Trump has come under fire for encouraging thousands of supporters to cram into an indoor stadium for his latest campaign rally, despite federal guidelines warning against mass gatherings inside.

But the President has continued to downplay the risks, telling supporters who attended the Nevada event that the country was turning a corner on coronavirus, and that a vaccine was likely to be announced within weeks. 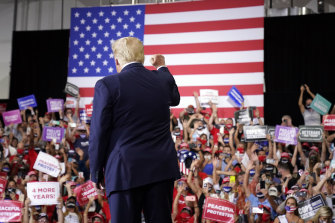 Trump has come under fire for putting on his first indoor rally in months, in Nevada.Credit:AP

“We're developing a vaccine in record time," he told the cheering crowd. “It’s going to be announced very soon; we'll be ready before the end of the year.”

As the race to the White House tightens, Trump headed to Henderson in Nevada to hold his first indoor rally since his Tulsa campaign rally in June, which was linked to a coronavirus spike about two weeks later.

Former pizza chain executive and one time Republican presidential primary candidate Herman Cain was among those who contracted the coronavirus after the event, and ended up dying on July 30.

Sunday's rally took place despite federal guidelines from the Centres for Disease Control and Prevention warning that “large in-person gatherings where it is difficult for individuals to remain spaced at least 6 feet apart” present the “highest risk” and ought to be avoided.

“The longer that interaction lasts, the higher the potential risk of becoming infected with COVID-19 and COVID-19 spreading,” the guidelines say.

With figures showing that more than 194,000 Americans have now died from coronavirus, doctors and Democrats were furious about the rally, with one medical expert even likening it to “negligent” homicide.

“What else could you call an act that because of its negligence results in the death of others?” George Washington University professor of medicine and surgery Dr Jonathan Reiner told CNN. 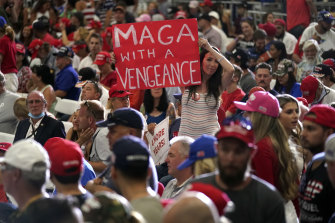 Supporters gather at the rally for US President Donald Trump in Henderson, Nevada.Credit:AP

“If you have a mass gathering now in the United States in a place like Nevada or just about any other place with hundreds of thousands of people, people will get infected and some of those people will die.”

Democratic senator Amy Klobuchar, whose husband has only recently recovered from COVID-19, said the President had known since February about the deadliness of the virus – as recorded interviews with renowned journalist Bob Woodward revealed last week. 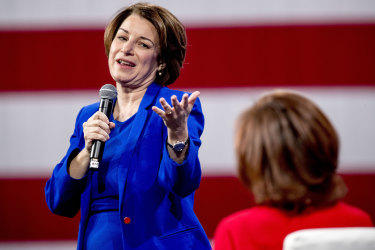 “I literally can't believe the President is doing this,” she said.

Nonetheless, Trump supporters who attended the rally seemed unperturbed by the risk, lining up for hours in the scorching Nevada sun, with some even reportedly fainting while they waited to see the President.

Fans who made it inside were treated to his usual campaign pitches, including vows to put “America first”; unsourced claims that mail-in voting would lead to voter fraud; and accusations that Democratic nominee Joe Biden is a puppet for the socialist left.

Trump also used the event to appeal to the Hispanic community, who make up a significant voting bloc, not only in Nevada, but also populous states such as Florida, Arizona and Texas.

With Florida a critical battleground given it has 29 electoral college votes, billionaire Mike Bloomberg announced on Sunday he would spend as much as $US100 million there to help Biden defeat Trump in that state.

The injection of cash will allow the Democrats to pump up their digital and television advertising in Florida, where postal voting begins at the end of the month – weeks before election day on November 3.

Trump responded by lashing out at Bloomberg on Twitter, saying of the former New York mayor: “I thought Mini Mike was through with Democrat politics after spending almost $2 billion, and then giving the worst and most inept debate performance in the history of presidential politics.”

Today’s rally is the second to take place in Nevada in as many days, in a sign of how tight the contest has become. Tomorrow, Trump will head to California to receive a briefing on the devastating wildfires that have torn through America's west coast for weeks.

April D. Ryan Reflects on Her Evolution as a Journalist

Where's the $15 Billion Congress Approved to Save Entertainment Venues?

Louder Than Life Festival Canceled Due To COVID-19 Pandemic