Police rescued 30 shoppers after they locked in a counterfeit store by a worker when he ran away from officers.

Officers from Greater Manchester Police (GMP) were on patrol in the city’s notorious ‘Counterfeit Street’ on Tuesday, December 6, when they heard people screaming for help from a locked shop.

After bursting into the property police were shocked to find dozens of people huddled in the locked building, including an elderly woman with a broken arm who need assistance leaving the premises.

They also found a ‘rabbit warren’ of single room shops selling counterfeit designer clothes, watches, electronics and other goods, with the force claiming there were so many it took five days to seize and log them all. 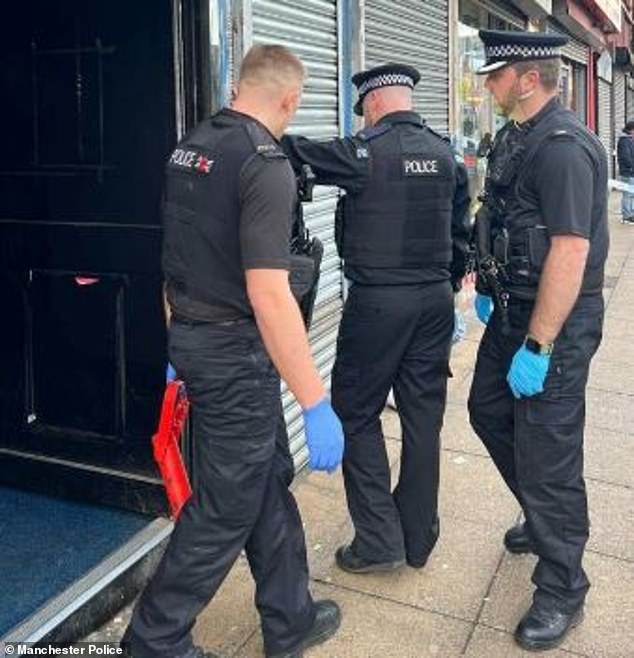 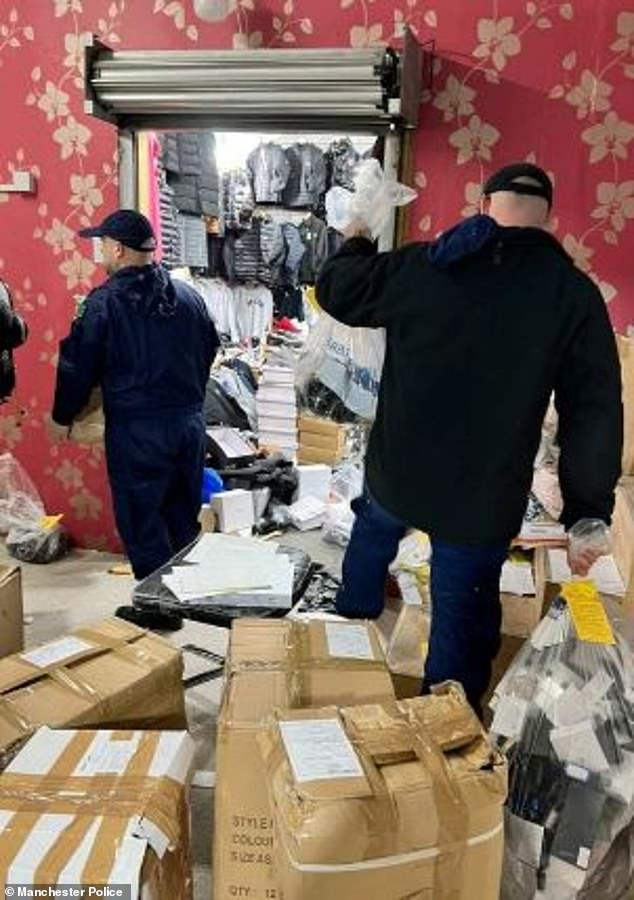 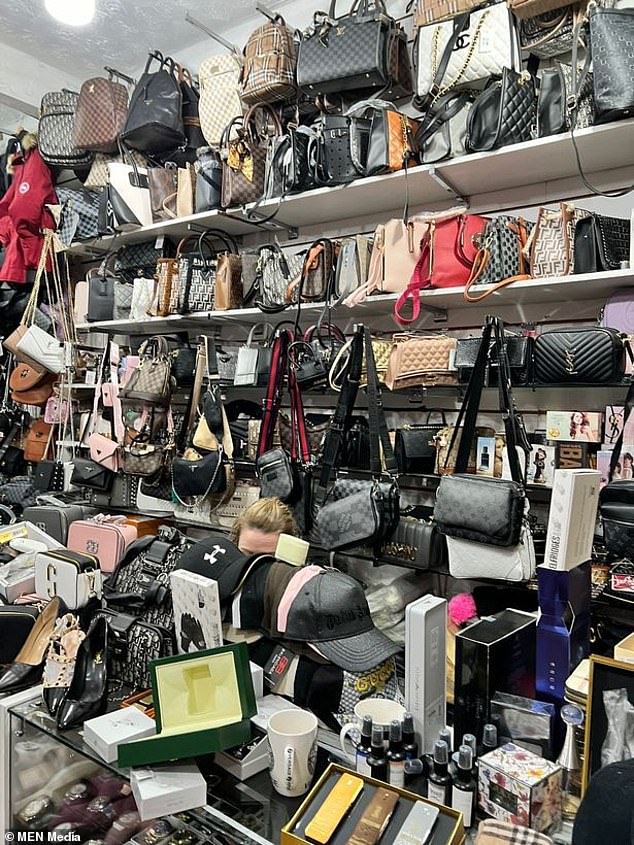 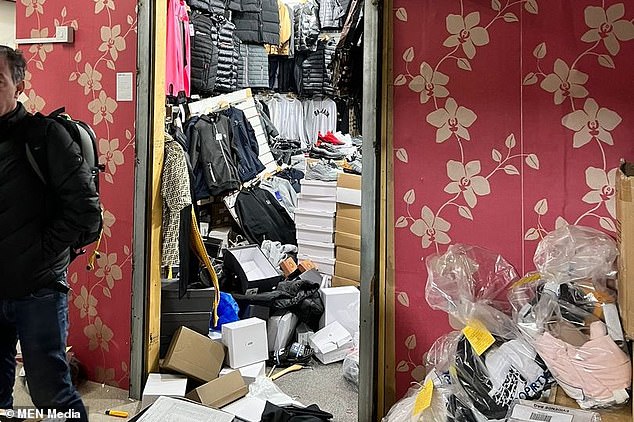 The shop was in the Cheetham Hill and Strangeways area of the city, which has been the subject of a police crackdown on counterfeit goods and gang activity.

GMP said a worker in the shop had been alerted by a ‘spotter’ in the area – people who are paid to keep watch and alert illegitimate business owners of approaching police officers.

The worker then locked the business and ran away while members of the public were trapped inside.

Det Supt Neil Blackwood said: ‘Our officers had a duty of care to force their way in and safeguard the individuals who had been trapped inside a building that was structurally unsound, utterly unsafe and from which they had absolutely no means of escape.

‘I appreciate that at Christmas time everyone wants to find a bargain, but by going to these illegal shops in the Cheetham Hill and Strangeways area, consumers are not only funding criminality, they are also putting themselves in very real danger. 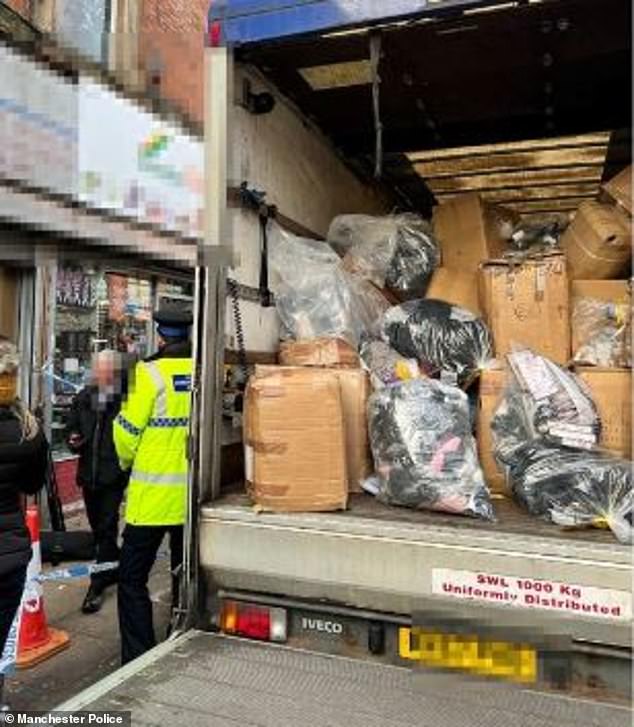 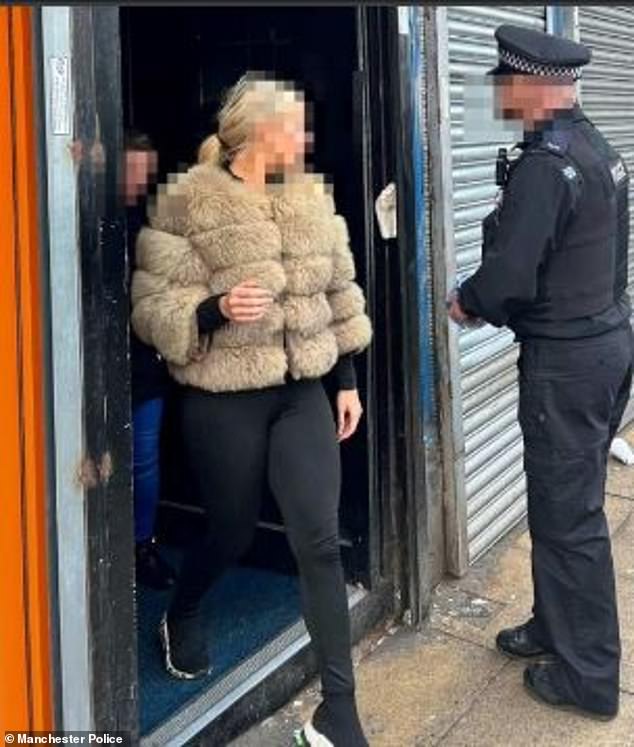 A member of the public walks out of the building after being freed by police on Tuesday, December 6

‘This isn’t the first report we’ve heard of members of the public being locked in – sometimes for hours – and we’ve even received reports of customers being assaulted by staff.

‘This latest seizure will make a dent in the finances of criminals but where Operation Vulcan will make the most impact is if members of the public start to shun these illegal businesses.

‘They are bringing devastating harm to our communities and those running them have no regard for your safety or welfare.’

Greater Manchester Police has targeted the area in recent months as part of Operation Vulcan, which is designed to smash the large number of premises selling counterfeit goods.

Last month one million ‘potentially deadly’ fake prescription drugs with a street value of several million pounds were seized from a flat in the Strangeways area.

The area is known as ‘Counterfeit Street’ or ‘Counterfeit Alley’ and can see people buy fake brand items for well below market price.

This includes Apple Airpods for £20, Nike trainers for £30 and Chanel handbags for £35.

It is estimated that knock-off products costing the UK economy £8 billion each year. 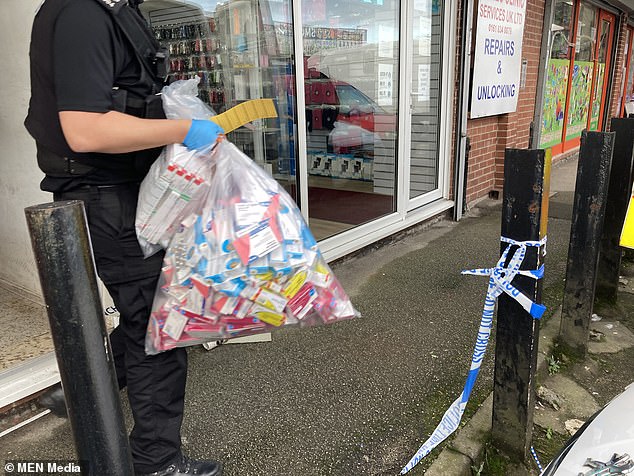 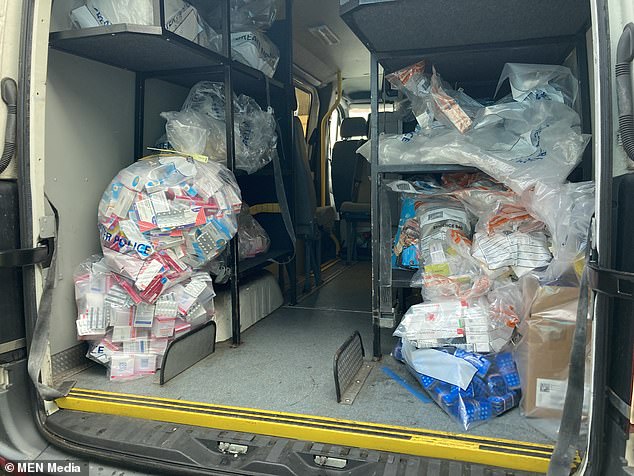 The haul, believed to have a street value of several million pounds, was discovered during search of business premises in the Strangeways area of Manchester. Pictured: The seized fake pills in the back of a police van

The infamous stretch of Manchester is set to be bulldozed by the council in a radical move to smash what police say is a national magnet for criminality.

Buildings on Bury New Road in the Strangeways area are to be closed, compulsory purchased, and then flattened.

The move is part of an operation to erase for good dozens of shops which sell hooky clothing, perfume, tobacco and toys but are also believed to be a front for serious crime.

GMP have established that 33 organised crime gangs from across the UK have links to the area. 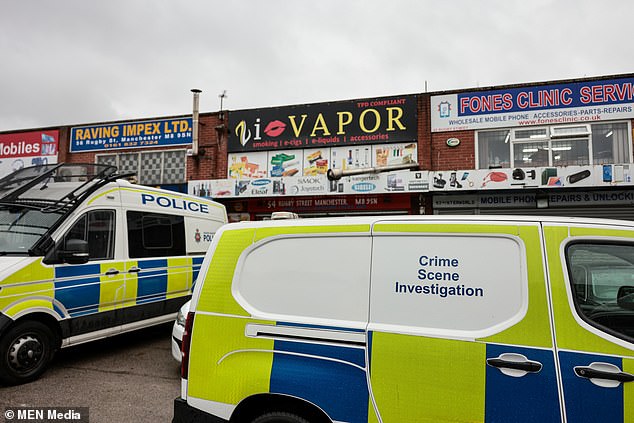 Brazen selling of prescription drugs on the streets near the shops is a daily occurrence and illegal immigration, modern-day slavery; women being forced to work as sex workers and the use of empty buildings for cannabis farms are rife in the district, say police.

Women walking through the area have reported being sexually harassed by men.

After decades of repeat raids on the shops to seize tonnes of counterfeit clothing and goods – which are quickly replenished – GMP is to work with Manchester council, and other organisations to deliver a permanent solution.

The opening of a new £93m campus for Manchester College on the site of the old Boddingtons Brewery within 200 yards of the stores selling counterfeit goods, plus a Travelodge hotel, which is even closer, have also been a catalyst for action as students and guests at the hotel have been harassed.

One of the few actors to publicly support Donald Trump in 2016 said the president's election win ended his Hollywood career: 'I had to sell everything'