Singapore: China is facing worldwide pressure from across the political and sporting spectrums over its treatment of tennis star Peng Shuai after the Women’s Tennis Association suspended all future tournaments and demanded the former world doubles no.1 be allowed to speak freely.

A global coalition of conservative politicians, human rights groups, players unions and tennis stars have pulled together to campaign for Peng’s freedom as her situation becomes emblematic of growing concerns about China’s authoritarian power, the role of sport in politics and the looming Winter Olympics in Beijing. 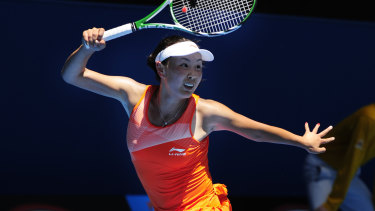 Peng Shuai at the Australian Open in 2011. Credit:Vince Caligiuri

Peng, 35, a three-time Olympian, accused former Chinese vice-premier Zhang Gaoli of sexual assault on November 2 before disappearing for almost three weeks. The International Olympics Committee established contact with her on November 21 but did not publicly address the allegations of sexual assault against Zhang. IOC member Dick Pound has since rejected concerns for her welfare, describing them as “silly” and stating the tennis star “is fine”.

That assurance has not been enough for the European Union, the WTA, the World Players Association, Republican members of the US Congress, or Peng’s colleagues on tour, who supported the WTA’s decision on Thursday to suspend its nine multimillion-dollar tournaments in China next year.

“If powerful people can suppress the voices of women and sweep allegations of sexual assault under the rug, then the basis on which the WTA was founded – equality for women – would suffer an immense setback,” said WTA chief executive Steve Simon. “None of this is acceptable nor can it become acceptable.”

Andrea Florence, the acting director of the Sport & Rights Alliance said the IOC’s eagerness to ignore the voice of an Olympian who may be in danger was irresponsible and “shows just how hollow its understanding of human rights really is”.

Peng’s claims, originally published on Weibo, have been scrubbed from Chinese social media and there has been no coverage of her allegations, disappearance, calls with the IOC or the WTA’s decision to halt all tournaments in Wuhan, Beijing, Tianjin and half-a-dozen other cities in Chinese state media.

Tennis legends Martina Navratilova, Billie Jean King and Chris Evert all tweeted their support for the decision on Thursday. “The WTA is on the right side of history in supporting our players,” said King. “This is a brave stance by Steve Simon and the WTA where we put principle above [dollars] and stand up for women everywhere,” said Navratilova. “Hoping the rest of the powers of tennis, other sports, and even businesses follow suit,” said Evert.

The push, particularly for other sports to stop participating in the Chinese market, now threatens to engulf Beijing’s preparations for the Winter Olympics which are due to start in two months’ time.

The IOC’s protest rules were updated ahead of the Tokyo Games, and now allow athletes to undertake political protests on the field of play and in press conferences, but not on the podium.

That could present a challenge to Beijing’s Olympic organisers and censors already grappling with other diplomatic threats over China’s treatment of Uighurs and pro-democracy leaders in Hong Kong.

In the US, Republican senators and potential 2024 presidential candidates Marco Rubio and Ted Cruz applauded the WTA’s decision. “The Olympics should follow suit and demand accountability for Peng’s disappearance,” said Rubio.

Cruz said the WTA was making a brave and commendable decision. “This is the kind of courage other organisations like the NBA should also demonstrate when dealing with the Chinese Communist Party,” he said.

The National Basketball Association has had its broadcasts into China cut repeatedly after high-profile players including Enes Kanter criticised Beijing’s human rights record, but it has not taken a formal position as a league. The men’s tennis tour, the Association of Tennis Professionals, has yet to confirm if it will continue playing its tournaments in China. US men’s tennis star Tennys Sandgren said it was time “to back the ladies up”.

The Winter Olympics are unlikely to face an athlete boycott, but the possibility of a diplomatic boycott at the February Games is growing. The Australian government is weighing up an unofficial diplomatic boycott, which would involve not sending any official representatives. A similar strategy is being considered in Washington, Ottawa and London.

The Chinese Ministry of Foreign Affairs has condemned what it sees as a politicisation of the Olympics but has deleted any mentions of Peng from its official transcripts.

“A successful and splendid Games relies on the concerted efforts of the big Winter Olympics family, not on the attendance of a handful of countries’ government officials,” said ministry spokesman Wang Wenbin. “We hope certain countries can avoid overplaying their hands.”

Get a note directly from our foreign correspondents on what’s making headlines around the world. Sign up for the weekly What in the World newsletter here.

UK cops warn suspects are ‘using coronavirus as a weapon’

Terminator-style AI drone 'hunted down' human targets without being given orders in 1st attack of its kind, says report