Facebook has banned the sharing or viewing of our news articles on its platform. For independent journalism straight from the source, download our app and sign up to our newsletters.

Who would want to be an opposition leader during a pandemic? Not only does he or she have to deal with the desire of the public for their government to succeed during a crisis – making sniping from the sidelines unwelcome – but also the inevitable rumblings from the discontents within.

The Age’s state political editor Annika Smethurst and journalist Paul Sakkal reported this week that Liberal leader Michael O’Brien’s political enemies have given him – anonymously, of course – until the May budget to improve the party’s fortunes or face a leadership challenge. It’s a sentiment that reflects the reality that Mr O’Brien has struggled to make a dent on the domineering presence of Premier Daniel Andrews. 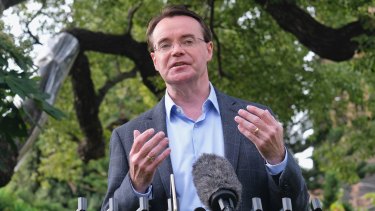 Opposition Leader Michael O’Brien said he would attempt to unite his party.Credit:Luis Ascui

Even during the worst of times, when Melbourne went into an extended hard lockdown last year, Mr O’Brien struggled to make his voice heard, as did opposition leaders across the country. He was right to avoid cheap partisan attacks during a public health crisis, but his mild manners meant he was rarely able to deliver a viable alternative vision.

In response to The Age‘s story, Mr O’Brien was adamant that he was the right person to lead the party. It is not The Age’s job to lecture any political party as to who should lead it, but the plotters briefing journalists – always off the record – in order to destabilise their leader should at some point, to use the vernacular, put up or shut up. Do they have the numbers or not? More importantly, who is the alternative? So far at least, there doesn’t seem to be an obvious candidate, with Matthew Guy – who led the opposition to a devastating loss in 2018 – the only name mentioned.

These are problems for the party, but there is a bigger problem for the state. It has been a hell of a year for Victorians, some of it due to the government’s bungling of hotel quarantine. The inquiry into the program revealed a litany of mistakes that made a mockery of the principles of transparency and accountability that are the bedrock of good government.

There are challenges ahead. As the health crisis recedes a little, what will happen to our once thriving CBD? Where will the new jobs come from? We won’t just “snap back” from this, so how do we reinvent ourselves to deal with the downturn in international students and tourism?

A liberal democracy cannot operate well without an effective opposition, one that is united and holds the government to account. There is no effective opposition in this state. By the time the next election is held in November next year, the ALP will have been in office for 19 of the past 23 years.

Voters have become tired of the panicked “fix” to blame it all on the leader when a political party is struggling. Whether Mr O’Brien stays or goes, the issues are deeper. What does the Liberal Party stand for? What are its ideas? Can it get over its internal tussles between small “l” liberals and hard-right members and accept that Victoria is a socially progressive state that wants economic prosperity for its citizens?

Anyone with experience in politics knows that disunity is death. If the Liberals find it impossible to unite behind Mr O’Brien, then make a decision and unite behind a new leader. Or has it become so dysfunctional that its MPs would rather squabble over the spoils of opposition than to get its act together so that it has a chance of forming government?

Note from the Editor

The Age’s editor, Gay Alcorn, writes an exclusive newsletter for subscribers on the week’s most important stories and issues. Sign up here to receive it every Friday.

OMG! Sean Paul Says Beyonce Once Confronted Him About Rumors They Hooked Up