A BOOZER has made a cheeky joke to get their own back at moaning neighbours – by hanging a sarcastic sign asking punters to “whisper.”

Pub owner Michael Campbell claims he has endured months of whinging by neighbours that the noise is too loud. 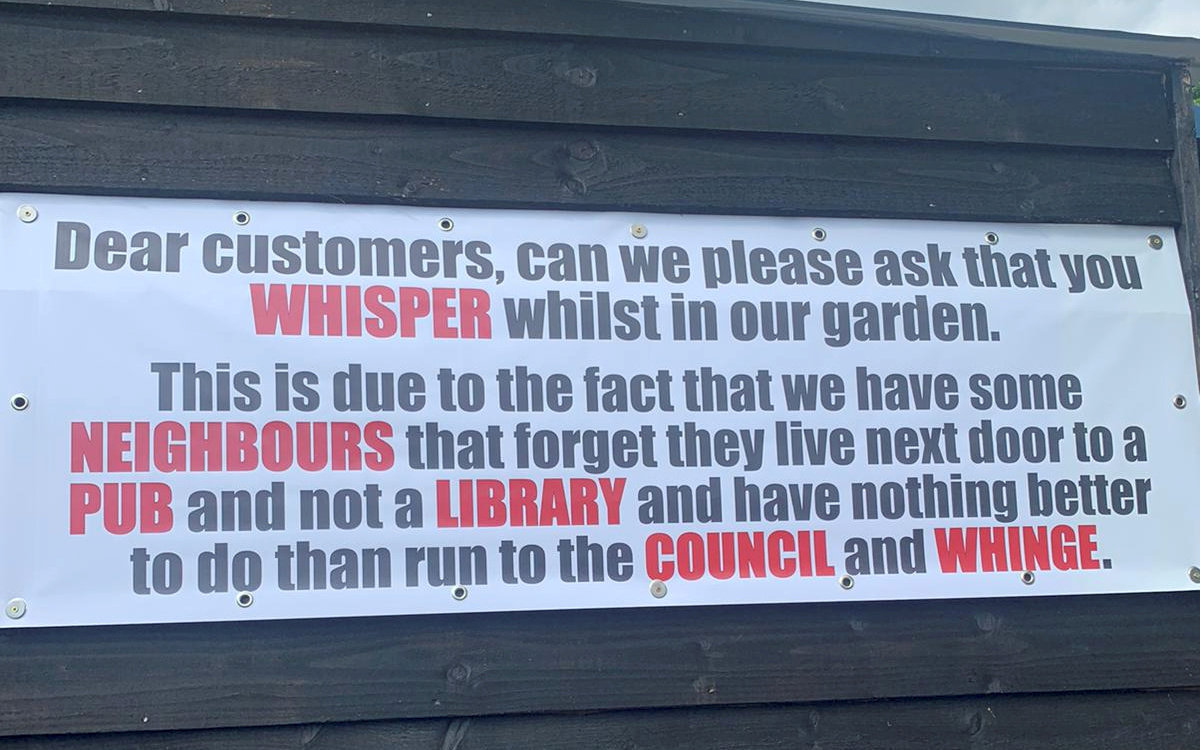 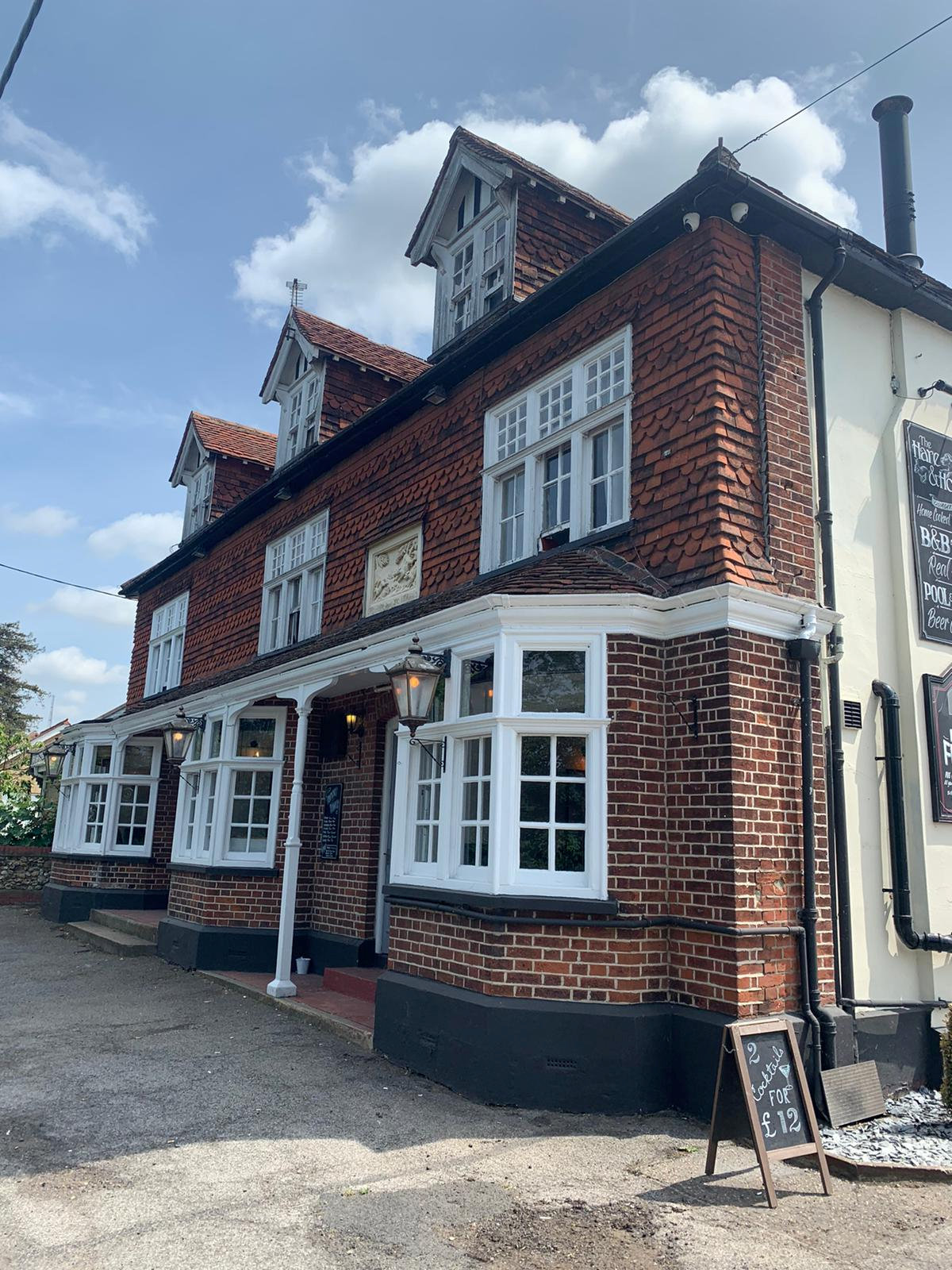 Customers at the Hare and Hounds pub, in Braintree, Essex have been told to keep the noise down after the bustling venue was threatened with fines and closure over the complaints.

His once quiet pub is now a bustling venue thanks to a post-lockdown influx, but instead of backing down Michael has penned a sarcastic response.

He hit back with a massive banner that reminds locals "they live next door to a PUB and not a LIBRARY".

The humorous notice reads: “Dear customers, can we please ask that you WHISPER whilst in our garden.

“This is due to the fact that we have NEIGHBOURS that forget they live next door to a PUB and not a LIBRARY and have nothing better to do than run to the COUNCIL and WHINGE.”

It has been met with praise from Michael's customers who have commented both in person and on social media in support of the pub. 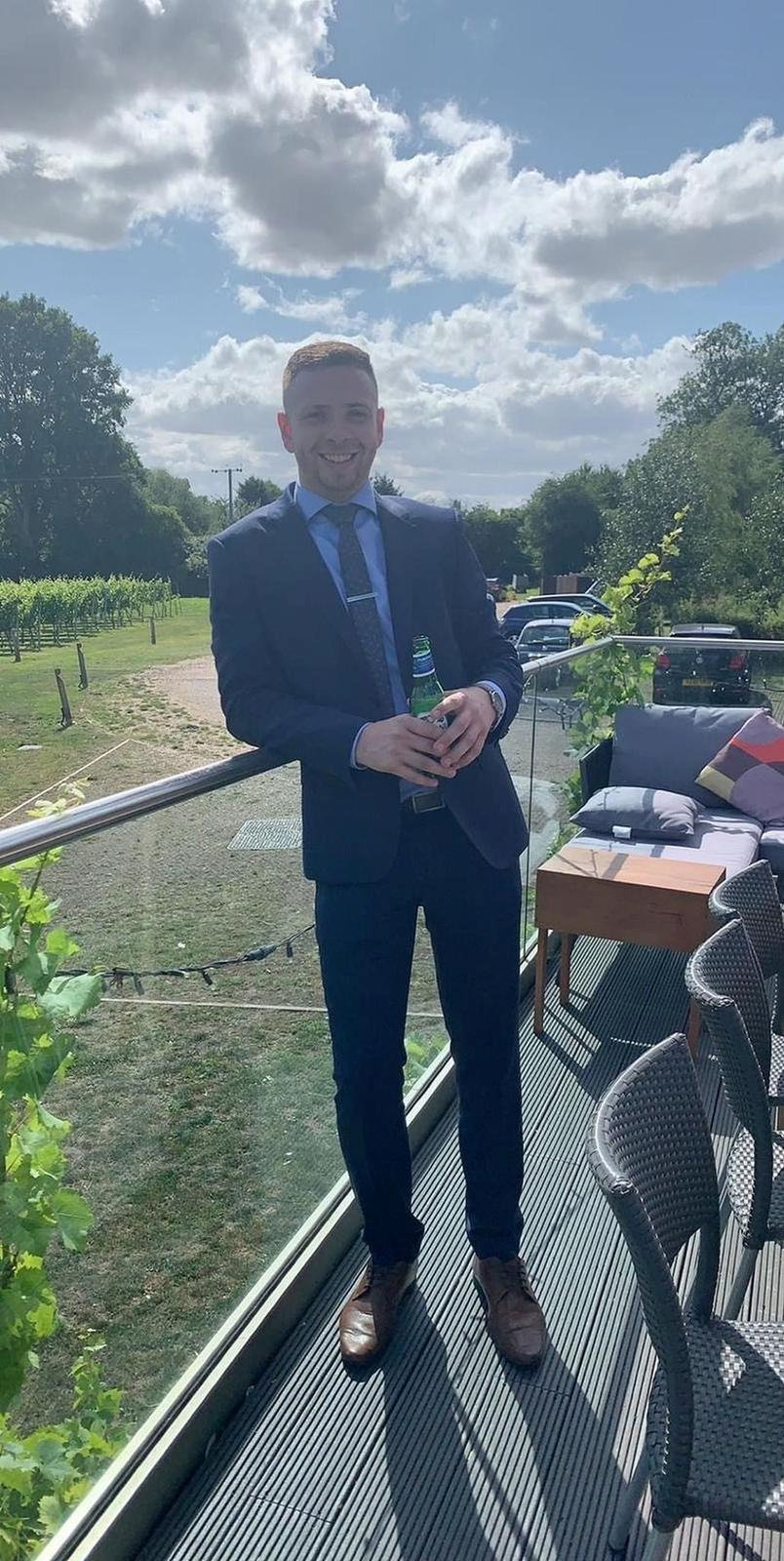 "We've been constantly trying to work with Braintree Council but getting nowhere. I seriously think they have a vendetta against us.

"We are just a business trying to survive. We have been closed for over a year due to lockdowns and they are trying to close us again.

"I think the sign is appropriate. I completely understand that it's a little cheeky, but it's more of a statement.

"The feedback we have had since putting those banners up have been amazing. Everyone is quite literally telling us that it's right.

"The customers love it! In their opinion, we should absolutely fight back.

"We could have to close the pub for good as a result. I think it's important to understand my team's frustration and worry too." 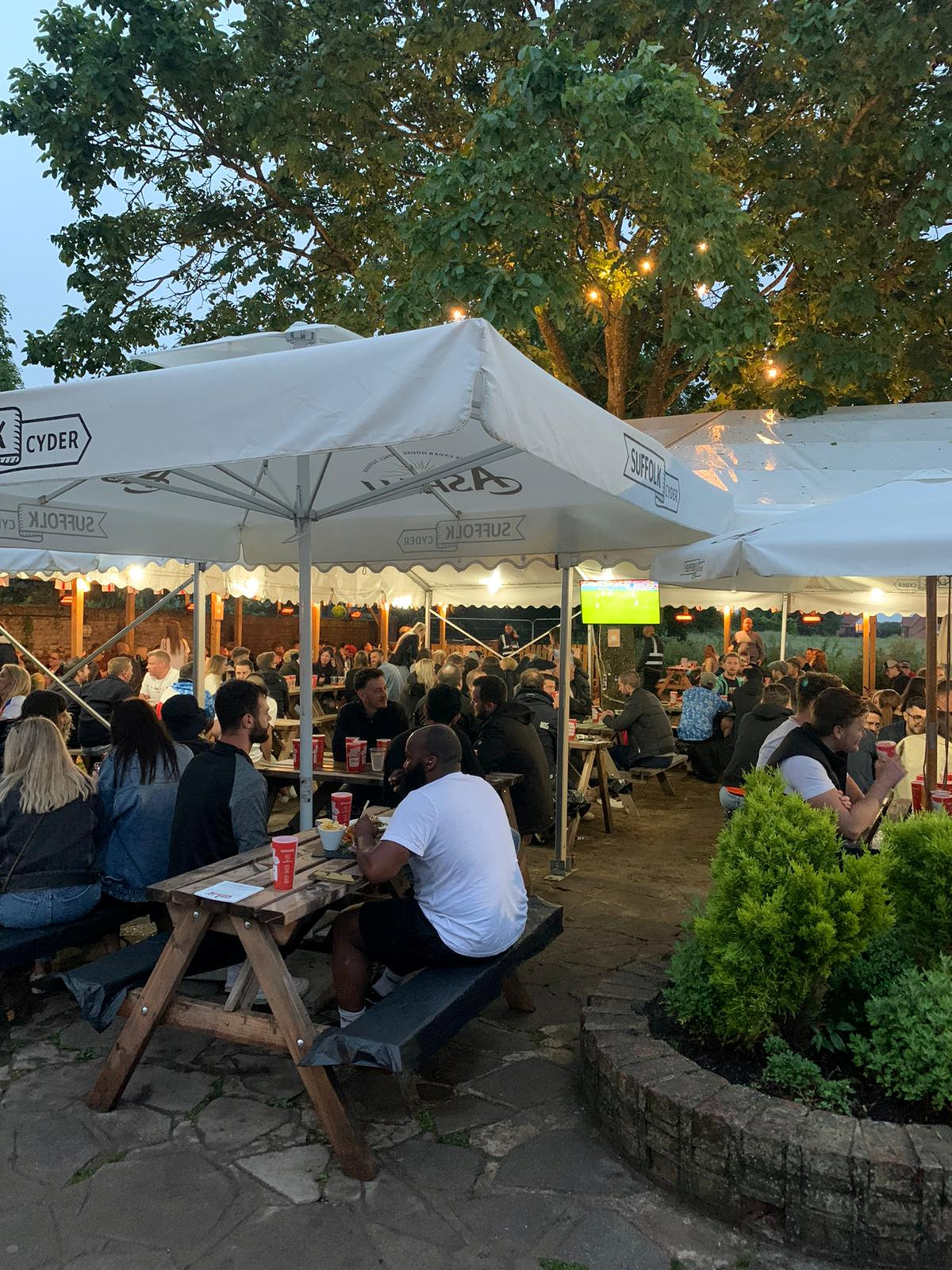 Since reopening in April 2020 after a year of lockdowns, the business, which admits it used to be a quiet country pub, has seen a massive influx of customers.

During lockdown, the pub converted its large garden to accommodate customers, increasing the capacity from 46 indoors to 300 both indoors and outdoors.

The pub has also began to host live music on Saturdays with acts, excluding bands, performing in the garden.

But now the pub could be facing a three month closure of its garden area following noise complaints from two neighbours.

Michael also revealed he had sent letters to his neighbours letting them know about his plans for outdoor seating and music.

Should the closure notice be successful, Michael also says his business may be forced to close down.

He added: "It's so frustrating, the council has taken the side of the two neighbours.

"The licence allows it. It’s not that loud, it’s really not that loud and we stop the music at 11pm, most of the time before that even. 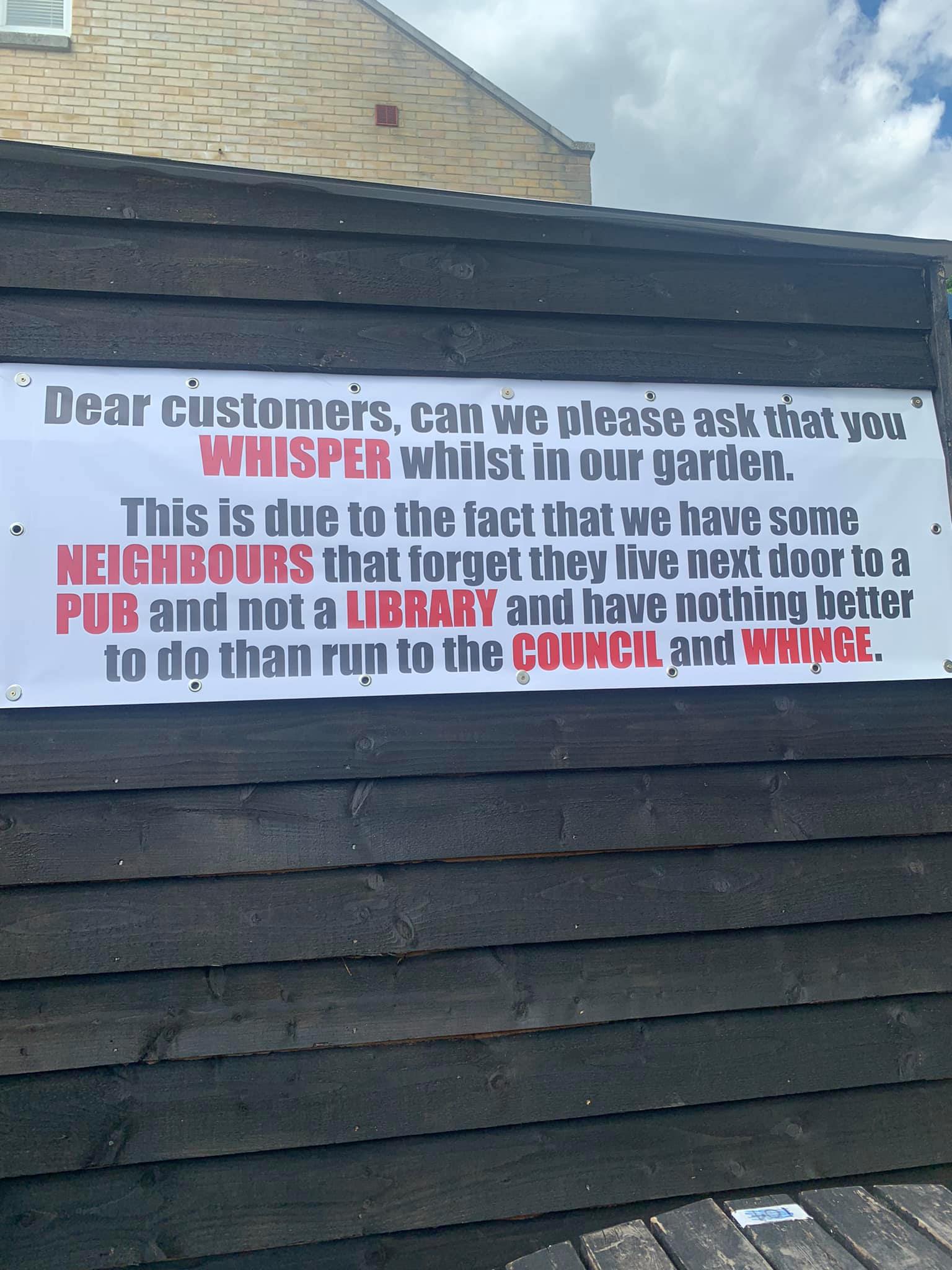 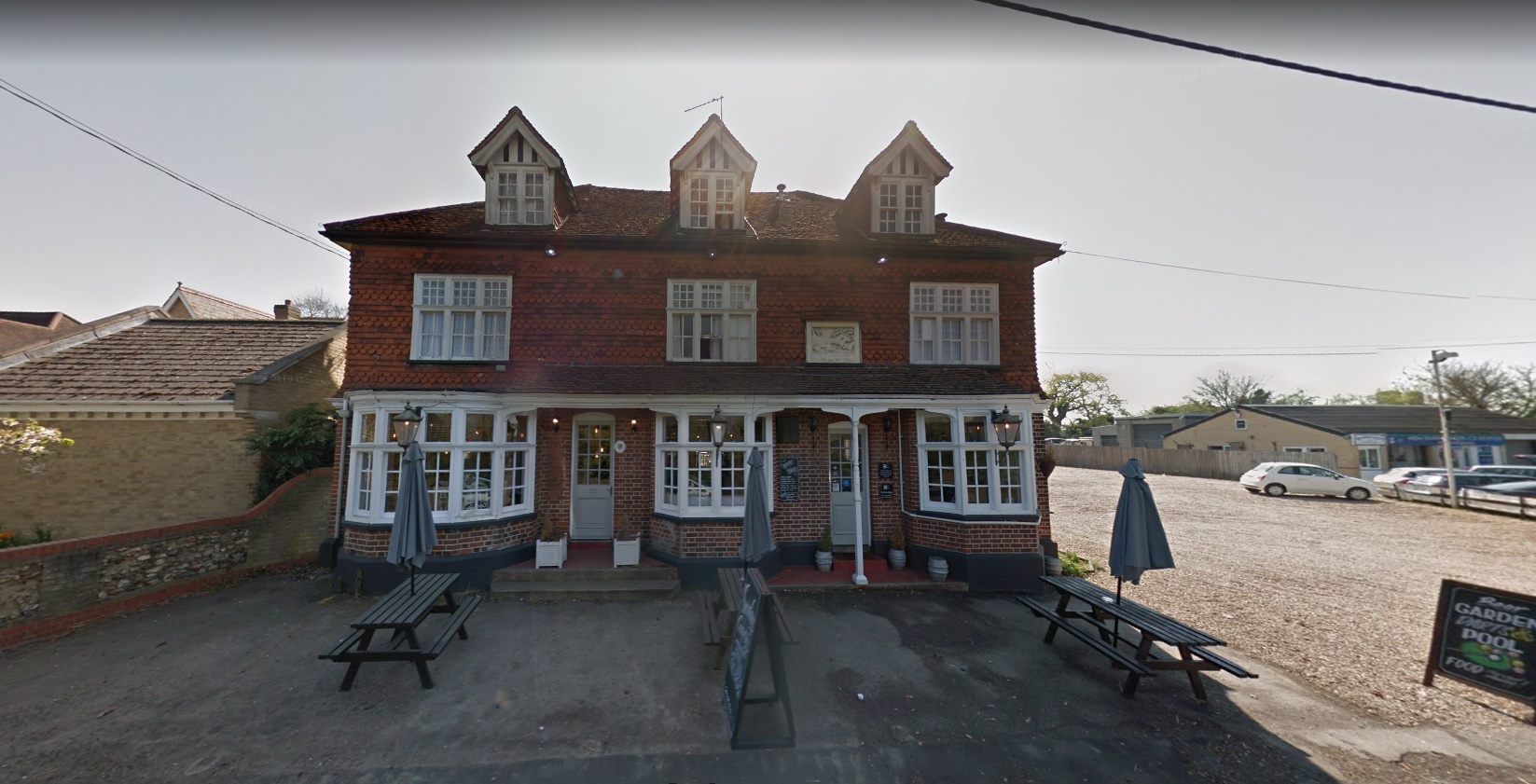 "Every weekend we are getting 'noise complaints' from the council, telling us that the noise is causing a 'statutory nuisance' to the point we were served an 'abatement notice' meaning that if we make 'too much noise' the council will take us to court and give us a huge fine.

"Without the garden our capacity would drop by 260 to around 46 but 40 people wouldn't even cover the bills.

"I feel like I've been let down by the council. We've done everything they asked us to do.

"I've got the letter. I printed them off and sent it off to them but not one of them got back to me.

"There are only two that have complained but, to please these two people, the actions would cause 36 people to lose their job, I would lose my business and the community would lose their little hub, Braintree will lose that.

"It’s amazing, the support of customers has been fantastic. We will not go down without a fight. Absolutely not. And will still be open until we are literally forced to close."

However, council bosses have defended their decision to pursue action against the pub.

A Braintree District Council spokesman, said: "We have received over 30 noise complaints from numerous households since April 16, arising from the use of the pub garden.

"As the local authority we have an obligation to investigate all complaints we receive and we have been trying to work with the owner of this establishment to resolve the issues.

"Ultimately it is for the business owner to control and manage his business and to act responsibly.

"Six different officers from this authority have verified the complaints from residents, even when taking into account the nature of the business, and there has been no significant improvement despite guidance and advice being offered.

"Of course we want to support local businesses during this time, but unfortunately it has become necessary for Braintree District Council to consider stronger measures to limit impact to residents from the business."