Burger seats, Super Mario Happy Meals and even branded ashtrays: Retro pictures of McDonalds in the 80s and 90s reveal a very different chain from the one we know today

Pictures of McDonald’s from the 1980s and 1990s have emerged online showing a very different restaurant chain from the one most people know today.

Remember food-shaped seats that resembled burger characters? How about branded ash trays? The images posted by Bored Panda reveal collectors glasses too, and even recall a Garfield the cat mugs series.

There are also images of now-obsolete foam packaging and promotions that have come and gone, like the McSalad Shaker and the McLean Deluxe, a sandwich that was billed as 91 per cent fat free, thanks to a secret ingredient: sea weed.

The restaurant’s famed hot apple pie served in cardboard sleeve was around back then, as was a ‘Big Cone’ version of the chain’s ice cream soft-serve, the images reveal.

The images, including indoor and outdoor playgrounds that were once a hallmark of McDonald’s past, provide a stark contrast to the chain that operates today with sleek touch screens and cafe’s that serve espresso and lattes. 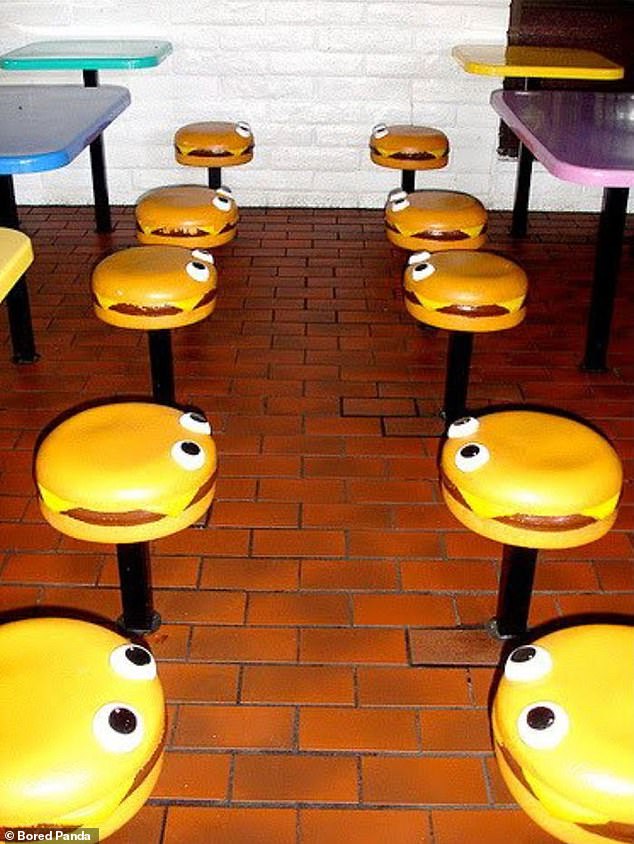 Pictures of McDonald’s from the 1980s and 1990s have emerged online showing a very different restaurant chain from the one most people know today. The images posted by Bored Panda include food-shaped seats that look like burger characters (pictured) 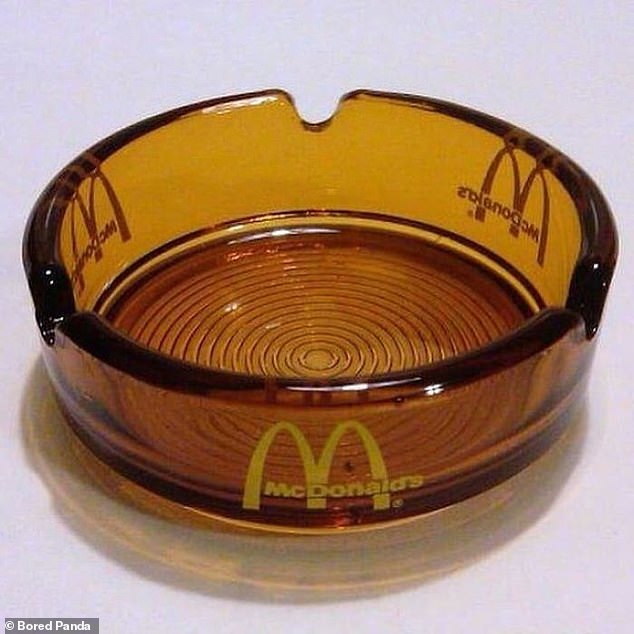 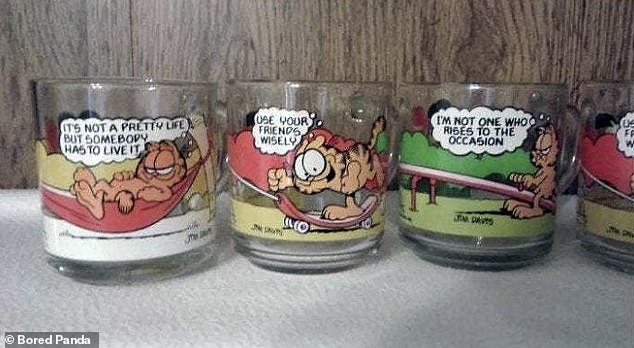 The images also show collectors glasses and mugs, like this series from Garfield the cat 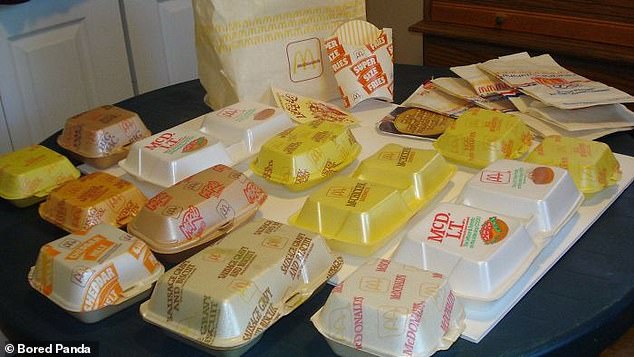 Environmentally-unfriendly foam containers were pictured as well, including the McD LT’s. One side kept lettuce and tomato cool and the other kept the burger warm. ‘The hot stays hot and the cold stays cold,’ McDonald’s used to say in its promotion for the discontinued burger 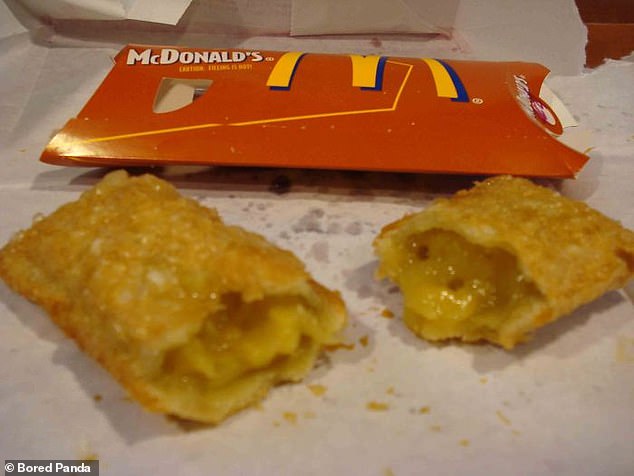 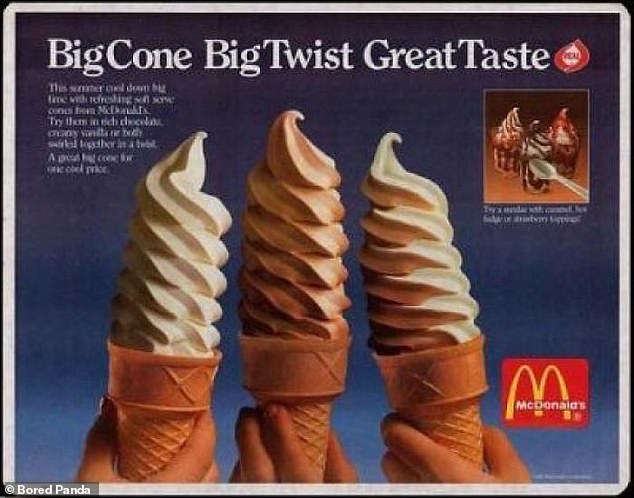 An ice cream cone back was made popular back in the day because of its low price, usually about a $1. Bored Panda recalls when McD’s decided to promote its ‘Big Cone’, promising a ‘Big Twist’ and ‘Great Taste’, in one of the images posted 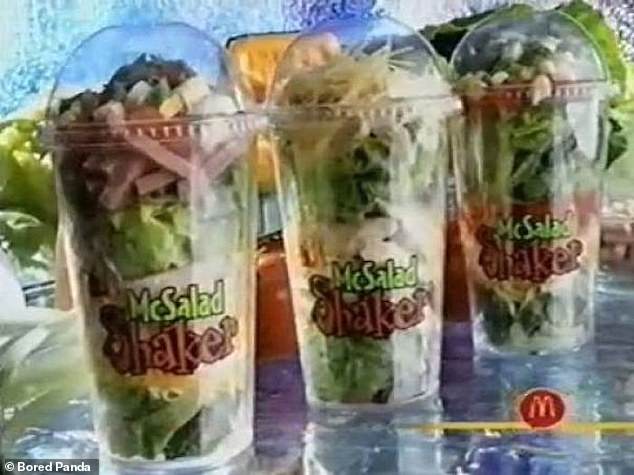 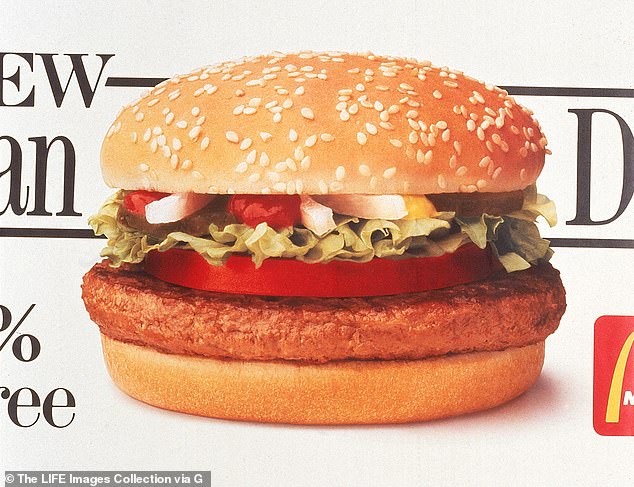 Another promotion was the McLean Deluxe, pictured here by Bored Panda. McDonald’s promised the sandwich was 91 per cent fat free, thanks to a secret ingredient: sea weed 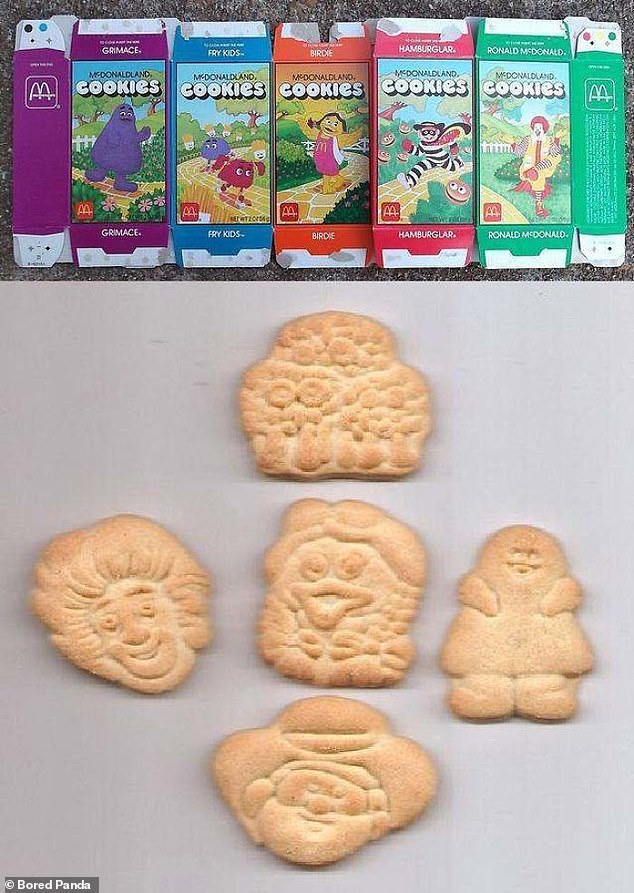 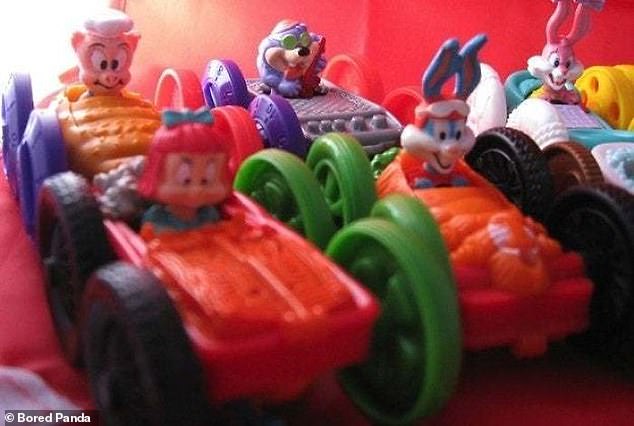 McDonald’s became one of the biggest toy sellers with its Happy Meal promotions. Here are adorable versions of the Looney Tunes characters, each seated in their own toy car 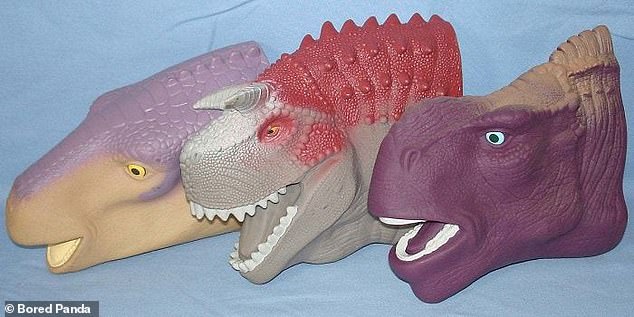 Another blast from McDonald’s past: Strange but fun-looking dinosaur hand puppets 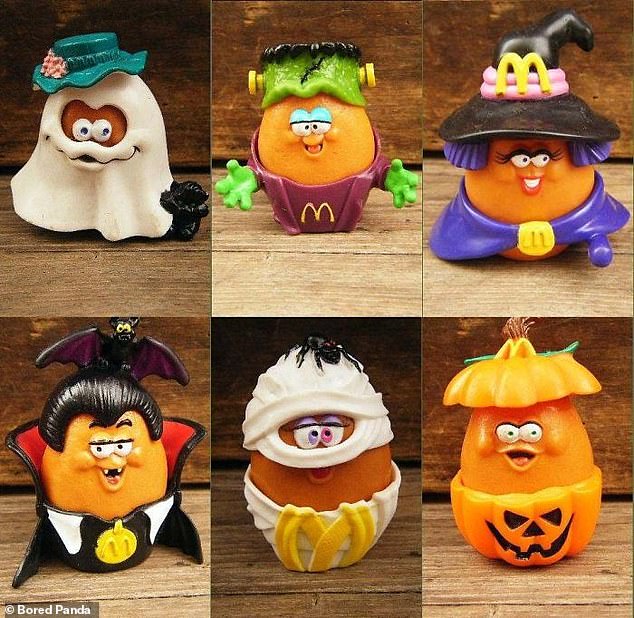 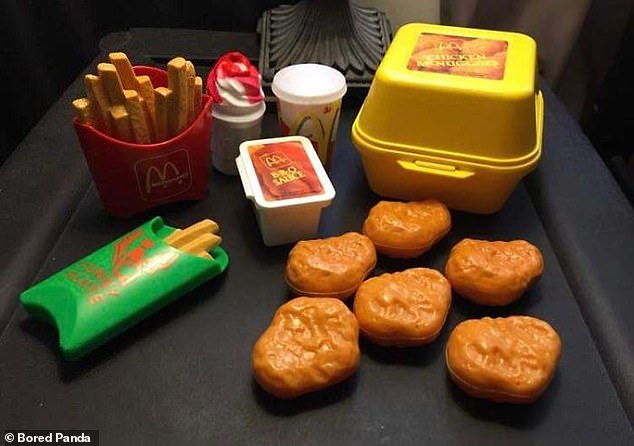 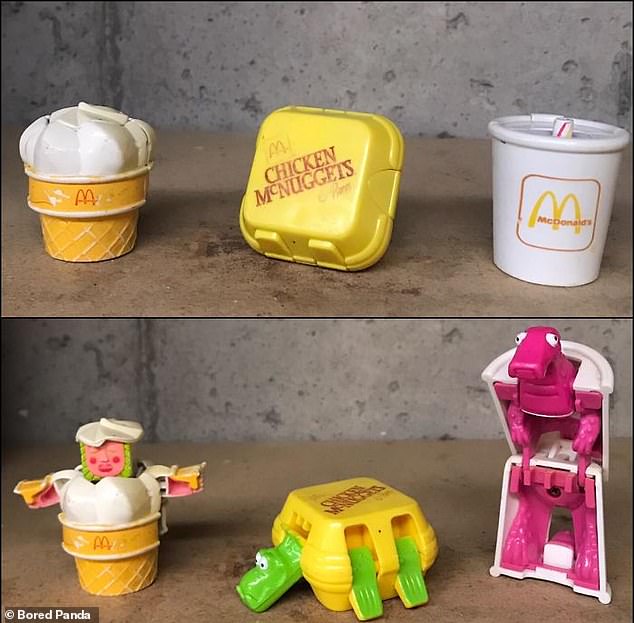 The Bored Panda images reveals another set of plastic food, which transform into characters 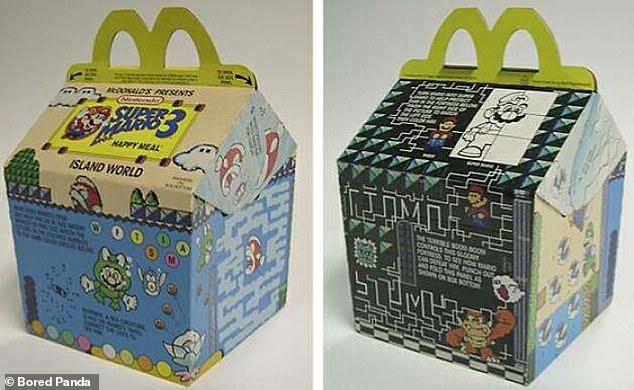 McDonald’s struck gold with children with Happy Meals just for them, which adults too would sometimes sneakily buy for themselves because of the lower cost and smaller portions. This Happy Meal shown by Bored Panda promoted the hit Nintendo video game Super Mario Bros. 3 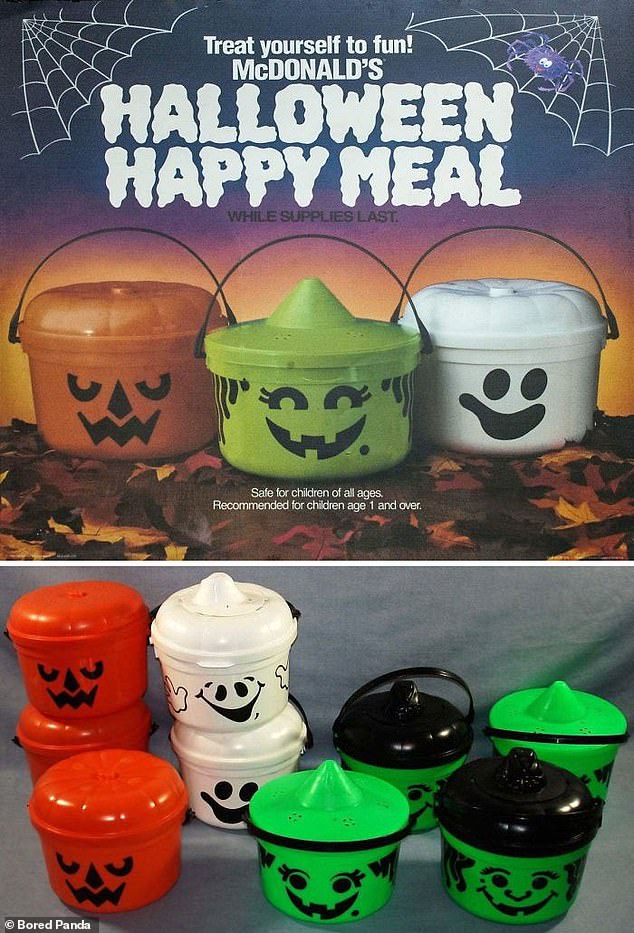 Bored Panda reveals an image of Happy Meals sold in reusable, brightly colored Halloween candy buckets kids could use for trick or treating 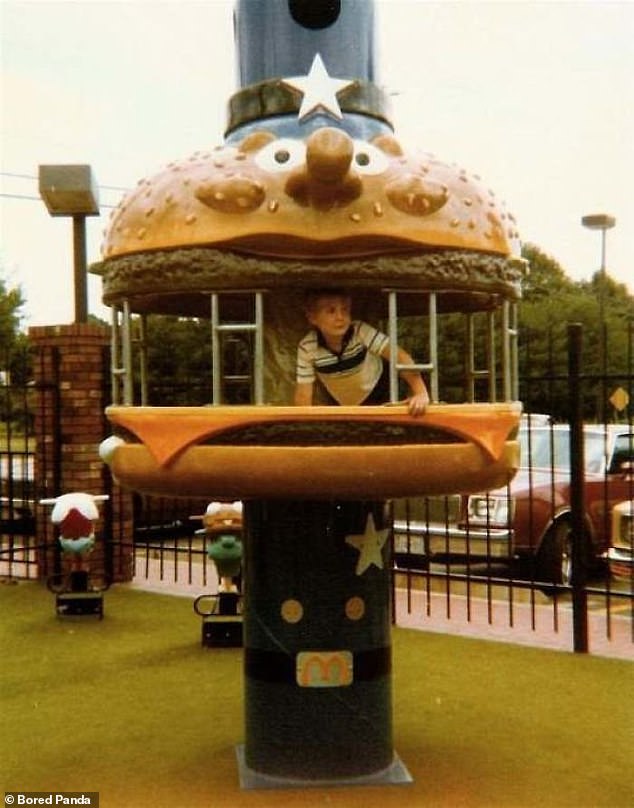 Probably the most retro pictures posted by Bored Panda reveal the playgrounds that were once a hallmark of McDonald’s restaurants. What kid back in the 80s and 90s wouldn’t want to play inside the mouth of Officer Big Mac 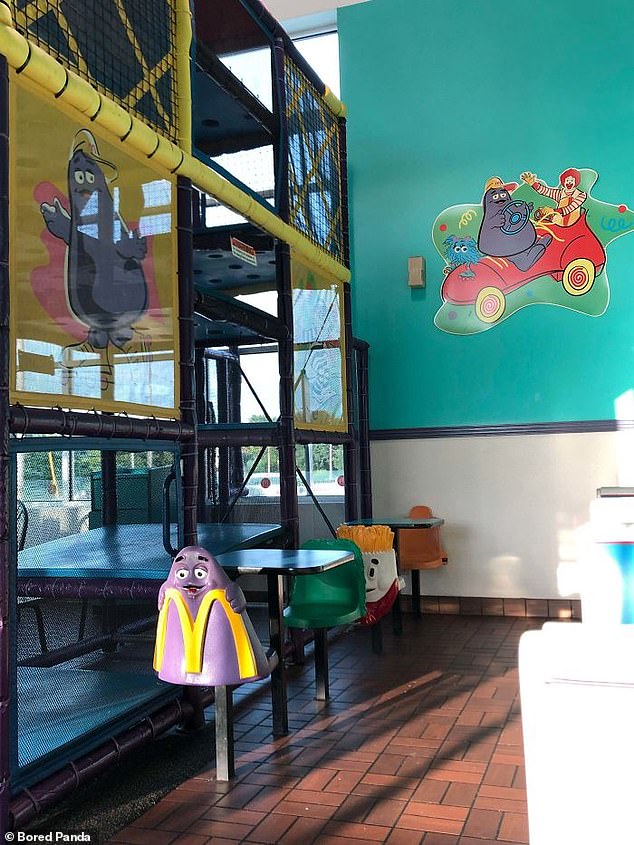 McDonald’s also was famed for its indoor playgrounds, which included ball pits and helped entertain children while their parents could eat sitting nearby 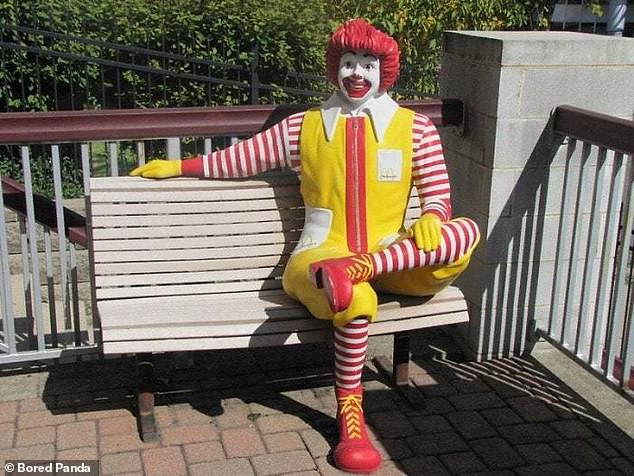 A statue of Ronald McDonald invites people to sit next to him in one of the images posted by Bored Panda. What a great selfie opportunity! One small problem: No one was taking selfies in the 1980s and 1990s. In fact cell phones were just coming around 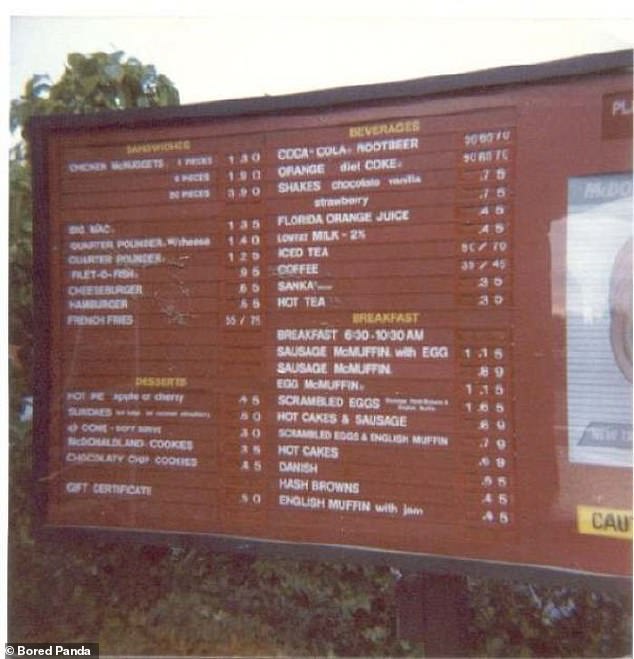 Bored Panda’s image of the prices listed in a drive thru likely shows the biggest difference from today and the 1980s and 1990s: Prices have gone up! This drive thru charges a whopping $1.35 for a Big Mac and less than a dollar for a large fires, incredible!

Hunter Biden was very bad at setting password on his infamous laptop: report

What You May Have Missed During Taylor Swift’s Grammys Performance