Washington: The US Senate has approved a $2.47 trillion coronavirus relief plan as Democrats muscled through a marathon debate – and overcame dissent from moderates within their own ranks – to move closer to delivering President Joe Biden his first legislative victory.

Democrats voted to adopt the bill without any Republican support after a more than 24-hour, around-the-clock session. It will now fall to the House to consider the sweeping package once again before it can become law and any of the aid can be dispersed. 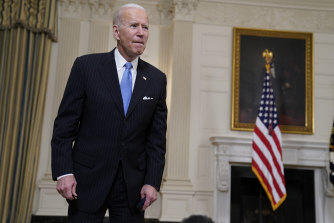 Joe Biden is about to secure the first legislative victory of his presidency.Credit:AP

The Senate’s passage of the measure marked an early win for Biden and his congressional Democratic allies, who had promised in the wake of the 2020 presidential election to authorise a robust package of new coronavirus aid – including another round of one-time payments to families – as one of their first acts.

“I promised the American people help was on the way,” Biden said Saturday. “Today, I can say we’ve taken one more giant step of delivering on that promise.” He predicted stimulus cheques could go out as soon as this month.

The relief measure includes a new round of up-to $1820 stimulus cheques for millions of Americans, $455 billion for cash-strapped cities and states, $169 billion for schools, and other sizeable sums for a wide array of programs including food assistance, rental relief and coronavirus vaccine distribution. The bill also authorises an additional $390-per-week in unemployment payments until early September, trimming the amount that House Democrats initially had approved earlier in the month.

The scope and duration of the jobless aid at one point appeared to imperil Democrats’ legislation: The Senate fell into a nine-hour standoff that stretched into late Friday night as one of the party’s most influential moderates, Senator Joe Manchin demanded significant changes to scale back the benefits.

Once resolved, though, Democrats largely banded together to jettison dozens of Republican amendments that would have dramatically slashed spending or struck funds set aside for transit systems and local governments. The relief plan generally remained intact as it cleared the chamber on a 50-49 vote more than a day after legislative proceedings began.

The lingering tensions threaten to loom large over the Senate as it prepares to turn soon to Biden’s plans to upgrade the country’s infrastructure and rethink the U.S. tax code.

Along with stimulus checks, unemployment aid, and cash to cities and states, the stimulus that passed the Senate on Saturday includes a bevy of aid to lessen businesses’ tax bills, assist Americans in paying for child care and support transit and other infrastructure reforms. Schools and hospitals also receive a major financial boost as the US government labours to respond to the coronavirus while simultaneously preparing to return to regular life more than a year after the pandemic first arrived.

But some of Democrats’ other priorities did not survive the fractious Senate debate. The most critical included a plan to boost the federal minimum wage to $15-per-hour, which would have marked the first such increase in decades.

The provision became a casualty of Democratic leaders’ tussle with moderate members of their own caucus, who did not support an effort to override the Senate’s parliamentarian after the rule-keeper determined it could not remain part of the bill.

‘Anyone can promise Ferraris’: Inside the fight to control the NSW firefighters’ union

Join Michelle Obama and DJ D-Nice For a Patriotic #CouchParty

Matt James and Rachael Kirkconnell are back together, but hes hesitant