Nothing is certain with weather-related sports, especially when you add global warming and a pandemic, but Perisher resort has beaten the odds to open from Friday, a week before the normal season launch date, due to favourable conditions. Thredbo and other resorts are set to follow on the Queen’s birthday long weekend.

Perisher said it was able to open early due to early snowfalls, cold nights and more snow forecast for this week. 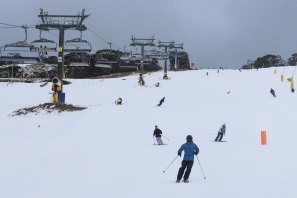 Opening day of the winter season at Perisher on Friday. Credit:Alex Ellinghausen

The weather forecast for the season looks promising with “neutral” conditions (neither positive nor negative El Nino or La Nina) over the Pacific and Indian oceans, according to Weatherzone meteorologist Ben Domensino. He says this means the groundwork is in place for good snowfalls.

“There are no climate drivers pointing towards a bad season,” he said. “Neutral conditions in the Pacific are probably the best phase of that climate driver that we would want for snowfall. But it will ultimately come down to the individual cold fronts as they move through and that’s very hard to predict on a seasonal scale. Unfortunately, snow season outlooks are always to be taken with a grain of salt.”

Edward Fortey, president of the Snowsports Industries of Australia, said resorts and associated businesses were hopeful there would be no repetition of last year when Perisher and Thredbo opened on time but with poor snowfalls before COVID-19 then badly affected resorts. He said the snow industry, worth $2 billion annually, had been badly hit and received no targeted government assistance.

“It was a challenging year for mother nature and resorts held back from making man-made snow because they didn’t know [because of COVID] if they would be open or not. By the time they came around to be able to make snow, the conditions were not right to do so.”

Based in Melbourne, Mr Fortey said it was groundhog day in Victoria.

“We are in a similar situation to where we were last year. The forward bookings were the highest they have ever been. The consumer is ready and the participation was going to be the best we have seen in years but in Victoria it has come to a bit of a grinding halt.

“As we understand regional Victoria is going to be able to access the snow resorts in Victoria but the greater Melbourne area will not be allowed to go to the snowfields on the opening weekend which is just heartbreaking.” 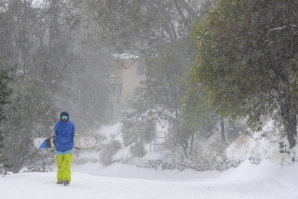 Snowmageddon: June 24, 2014 when 55 centimetres of snow fell in less than 24 hours at Falls Creek Resort in Victoria.Credit:Fairfax

The Bureau of Meteorology website advises: “Two of the best seasons on record – 1956 and 1981 – had no snow at all at the start of June, while two of the poorest seasons – 2006 and 1965 – had 20 centimetres and 60 centimetres, respectively, of snow on the ground before the Queen’s Birthday weekend. Early-season cover isn’t always the guide we might think it is.”

Our Breaking News Alert will notify you of significant breaking news when it happens. Get it here.