Dominic Cummings is less truthful than Boris Johnson – and his sensational claims about the Government’s ‘mishandling’ of Covid have not dented the Prime Minister’s popularity.

Most people think that Mr Cummings, Mr Johnson’s former senior Downing Street aide, wanted revenge on his Tory foes rather than to establish the facts.

And they are prepared to forgive the Prime Minister for errors made at the start of the crisis because of the huge success of the vaccine programme.

But despite the low regard for Mr Cummings, there is support for some of his most controversial views.

The public agrees Health Secretary Matt Hancock should be fired and – narrowly – that Mr Johnson’s fiancee Carrie Symonds has too much power. 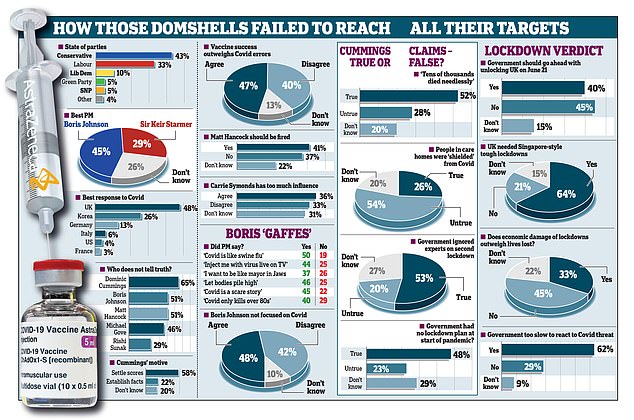 These are among the findings of the first major survey conducted since Mr Cummings’ blistering attacks on Mr Johnson and Mr Hancock this week.

According to the Survation poll for the Daily Mail, the Conservatives have a ten-point lead over Labour.

Rishi Sunak is seen as much more trustworthy with only 29 per cent saying the Chancellor does not tell the truth.

Mr Cummings has been accused of trying to undermine Mr Johnson since being ousted from No 10 in November after losing a power struggle with Miss Symonds. 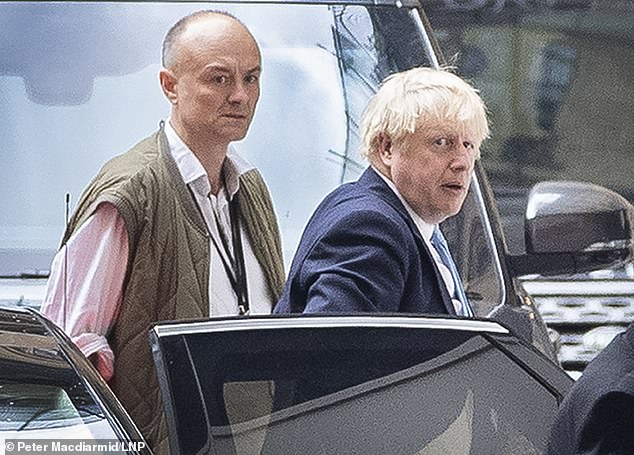 Barely one in five voters (22 per cent) say the former chief adviser’s intention in speaking out was to establish the truth about how the Government dealt with Covid.

Johnson’s ‘strained relations with top mandarin he sees as stooge’

Britain’s most senior civil servant may go back to working for the Royal Family as his relationship with Boris Johnson has become strained, it was claimed last night.

Simon Case last year was appointed as the youngest Cabinet Secretary in more than a century after he was poached from Prince William.

The 42-year-old had previously worked as the Duke of Cambridge’s private secretary. And Whitehall insiders last night said Mr Johnson had privately signalled that ‘if Simon was to be offered a role back at the palace, he would not stand in his way’.

It comes after concerns about his closeness to Dominic Cummings. A source said: ‘There was always an air of suspicion that he was a Dom stooge. Since Dom left that stench has clung to him. The PM is generally a suspicious individual.’

On Wednesday, Mr Cummings told MPs he had argued for Mr Case to be given a role in No10 in a bid to exert influence on the PM over Covid rules.

The former adviser said: ‘If I bring in someone official to try to take over on Covid that will a, make things better and b, maybe he will listen better to Simon Case than he will to me.’

Nearly six out of ten (58 per cent) say he was more interested in ‘settling scores’. The survey – in which 1,010 adults were interviewed online on Thursday and yesterday – shows support for Mr Johnson’s overall record on the pandemic.

They think the UK has been much more successful at combating the virus than other countries.

Asked which of several major nations had done best, UK came top, chosen by 48 per cent of voters.

Korea was way behind in second place on 26 per cent, followed by Germany’s 13 per cent, Italy on 6 per cent, US on 4 per cent and France’s 3 per cent.

The poll leaves little room for doubt as to the main reason for this favourable view – the stunning achievement of the vaccine roll out.

Nearly one in two (47 per cent) say the vaccine success outweighs mistakes by the Government when the virus first hit while 40 per cent say it does not make up for it.

Mr Johnson’s poll lead is all the more remarkable bearing in mind that a clear majority agree with one of the most shocking charges laid against the Government by Mr Cummings.

A total of 52 per cent back his assertion that ‘tens of thousands of people died needlessly’ because of mistakes in curbing the disease, while 28 per cent reject that assertion.

Four in ten (41 per cent) say Mr Hancock, struggling to hold on to his Cabinet post after Mr Cummings’ broadside, should be dismissed, while 37 per cent say he should stay.

Thirty-six per cent believe Miss Symonds wields too much influence in No10 but 33 per cent say she does not.

Despite judging Mr Johnson as less dishonest than Mr Cummings, the public rejects the Prime Minister’s denial that he said ‘let the bodies pile high’ after a Covid crisis meeting.

There is similar support for other claims by Mr Cummings regarding Mr Johnson’s indiscreet utterances.

Forty-four per cent believe the Prime Minister volunteered to be ‘injected with the virus live on TV but 25 per cent do not believe it.

Global Bulletin: ‘I’m a Celebrity…’ Moves Shoot From Australia to U.K. Due to COVID-19 Travel Restraints

How to Manage Co-Parenting in the Age of COVID-19