Few would have predicted that more than 24 hours after voting ended in the United States election that global attention would lock on Arizona as Donald Trump’s pathways to victory tightened around the country, but some enjoyed the poetry of it.

The day after the election was an unhappy one for Trump whose electoral college count stalled as Biden's climbed with victories in Wisconsin and Michigan. In Pennsylvania the President's lead was slowly whittled away as mail-in votes were counted. In Nevada counting stalled, and while Trump held in North Carolina, Georgia remained stubbornly close. 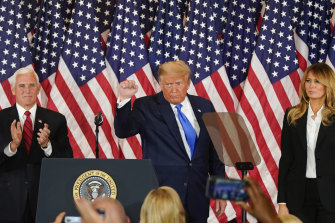 Donald Trump insisted he “won” the election despite counting still being carried out in key states.Credit:Bloomberg

However, in the southwestern state of Arizona, which AP and Fox News had declared a Biden victory on election day, Trump slowly closed on the Democrat's lead, giving Republicans a possible pathway out of their electoral college gloom.

For years Democrats – Barack Obama and Hillary Clinton – have blown time and treasure trying to flip Arizona, but none have won there since Bill Clinton took it 1996.

Politically Arizona is best known as the home of the late Senator John McCain, the Republican giant so loathed by the President that Trump once sneered at McCain’s war record.

“He’s not a war hero,” said Trump, who avoided the draft claiming bone spurs. “He was a war hero because he was captured. I like people who weren’t captured.” McCain was shot down over North Vietnam and refused an offer of early release to remain with other POW’s 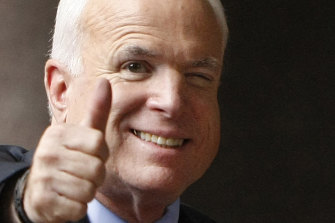 But there was more to it than the staggering difference in character between McCain and Trump.

It was also telling that so much of the support Biden enjoyed in Arizona came from the growing multi-ethnic suburban population in Maricopa County. Joe Arpaio was the elected sheriff of Maricopa, the man who styled himself as “America’s Toughest Sheriff” and an ally of Trump’s in spreading the racist “birther” conspiracy theory that former President Barack Obama was not born in the United States.

Arpaio had long raged at the undocumented immigration into the US from Mexico that Trump harnessed to win the Republican nomination almost five years ago. Now, as the Maricopa suburbs around the city of Phoenix spread, the shift in demographics was working against this hardline rhetoric, just as it was in Texas, Georgia and North Carolina.

Over the weeks leading up to the election, polls suggested the race was tightening, but it particularly galled the Trump campaign that the first major media outlet to call it on election night for Biden was Fox News.

According to Vanity Fair reporter Gabrielle Sherman – known for his Fox insider contacts – Trump was so angry about the call he rang Rupert Murdoch to demand a retraction. Murdoch refused.

The following day some other outlets had still not called the state, and as the count slowly continued Trump began to whittle Biden’s lead, though at the time of writing not enough for Fox nor AP to recant.

Trump stewed in the White House, spending much of the early part of the day venting spleen and sharing sympathetic commentary via Twitter, lapsing into silence as news from the counting states slowed.

“We have claimed, for Electoral Vote purposes, the Commonwealth of Pennsylvania (which won’t allow legal observers) the State of Georgia, and the State of North Carolina, each one of which has a BIG Trump lead. Additionally, we hereby claim the State of Michigan if, in fact, …..there was a large number of secretly dumped ballots as has been widely reported!” he declaimed at one point in a pair of missives marked by Twitter as potentially misleading.

Biden assured viewers he was not claiming victory, simply expressing confidence that when the count was voted – in full – he would win.

As his running mate Kamala Harris looked on he invoked the language of Abraham Lincoln, the Republican president who saved the nation, saying that “government of, by and for the people is very much alive in America".

Adopting the language of a presidential victory speech, Biden said that though he had campaigned as a Democrat he would govern as an American.

“The presidency is not a partisan institution, it is the one office in the nation that represents everyone,” he said.

By the time sun had set rumours had spread among Trump supporters that Republican votes were being disqualified for the use of sharpie pens. Officials denied the claims, a court action was launched.

By night fall hundreds of angry Trump supporters gathered outside the Arizona election centre chanting “count the vote”, disturbing those inside who were counting the vote, and prompting sheriff’s deputies to suit up in tactical gear.

“My photographer and I have left after one protester threatened us and said he would find where we live. We are filing a police report,” tweeted one reporter at the scene.

Third Covid wave could start NEXT WEEK but won’t be as bad as January, say Sage

The Absolute Cutest Photos of the Kardashian-West Family