Turkey will no longer block refugees trying to get to Europe after 33 of its soldiers were killed in a Syrian government airstrike in Idlib overnight, an official has said.

Police, coastguard and border security officials have been instructed to stand down and allow people access to European borders by land and sea, the official added.

Turkey appears to be trying to pressure European leaders to intervene and help its military halt a Syrian government offensive in Idlib province.

On Friday, NATO chief Jens Stoltenberg confirmed the alliance will hold emergency talks at Turkey’s request over the situation in western Syria. 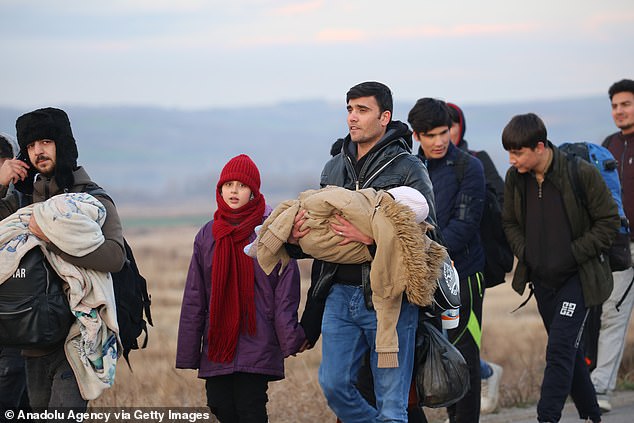 Turkey will no longer stop refugees crossing its territory towards Europe after 33 of its soldiers were killed in a Syrian government airstrike overnight, an official has said 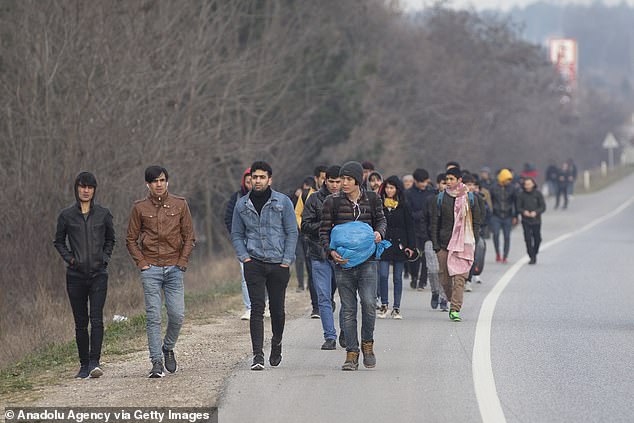 Groups of migrants were pictured making their way through Edime, in western Turkey, towards the borders with Bulgaria and Greece early on Friday 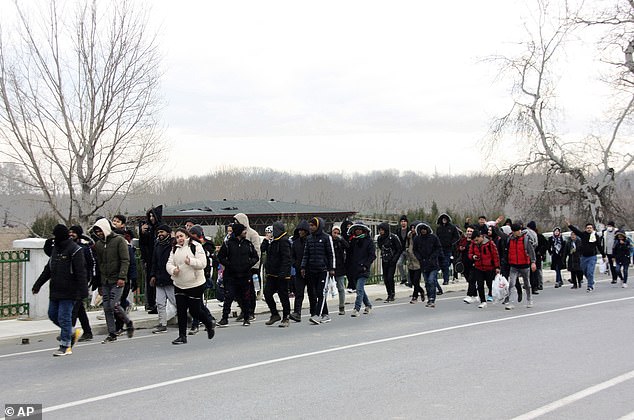 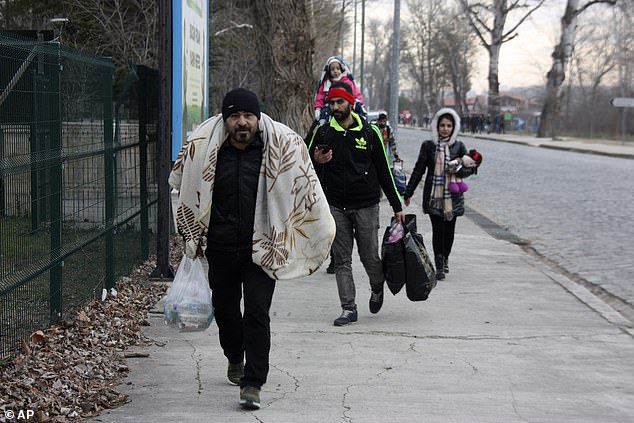 Police, border officials and coastguard have all been instructed to stand aside and allow refugees to cross the country towards Europe 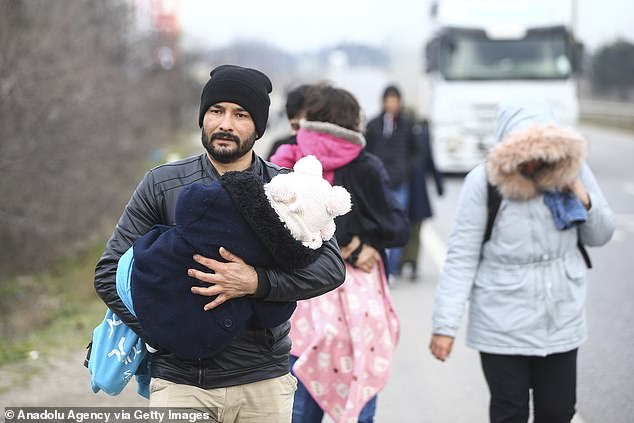 The Idlib offensive, which is being carried out with Russian backing, threatens to spark a refugee crisis on the Turkish border as millions of civilians risk being indiscriminately targeted in bombings and airstrikes.

Idlib is currently home to some four million people, many of them displaced by fighting elsewhere in the country and living in tent cities along Turkey’s border.

Turkish media published images of hundreds of refugees crossing its territory on the way to Greece and Bulgaria overnight.

By Friday morning some of those had landed in boats on the Greek island of Lesbos, where they were put on to coaches and taken to camps on the island.

A group of 300 people – including Syrians, Iranians, Iraqis, Pakistanis and Moroccans – were pictured crossing Turkish territory. 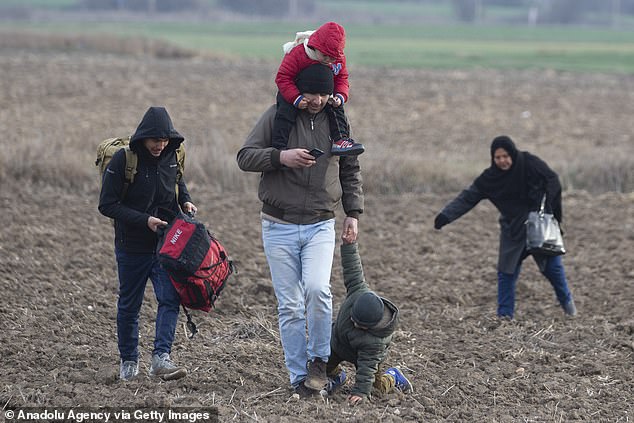 Turkey struck an agreement with European leaders to halt the flow of migrants through its territory in 2016, but now appears ready to renege on that pledge 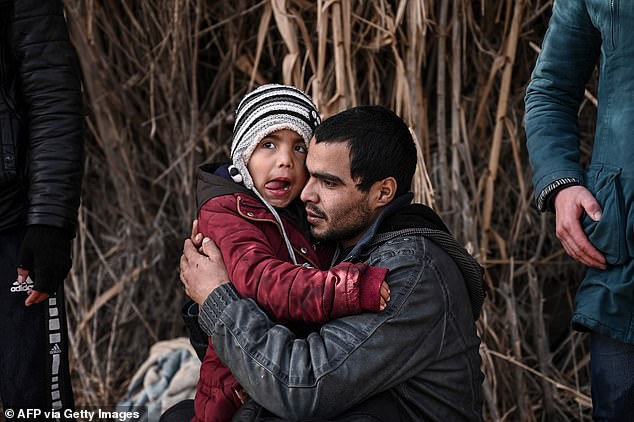 By Friday morning some of the refugees – including Iraqis, Afghanis, Syrians and Iranians – had landed on the Greek island of Lesbos 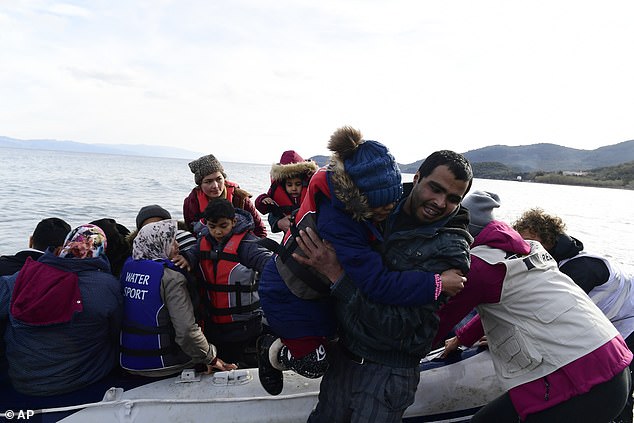 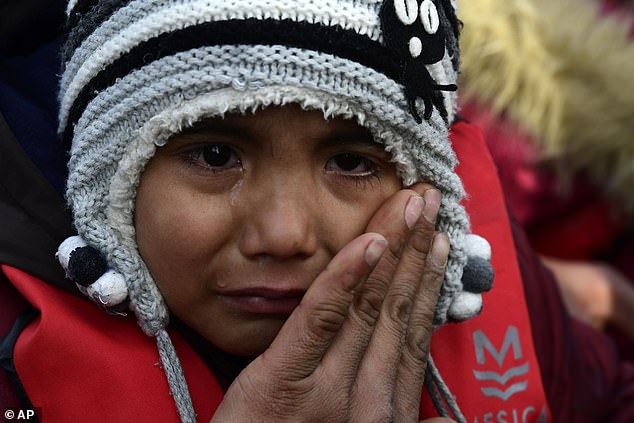 A child cries as he arrives at the village of Skala Sikaminias, on the Greek island of Lesbos, after crossing the Aegean sea from Turkey with other refugees 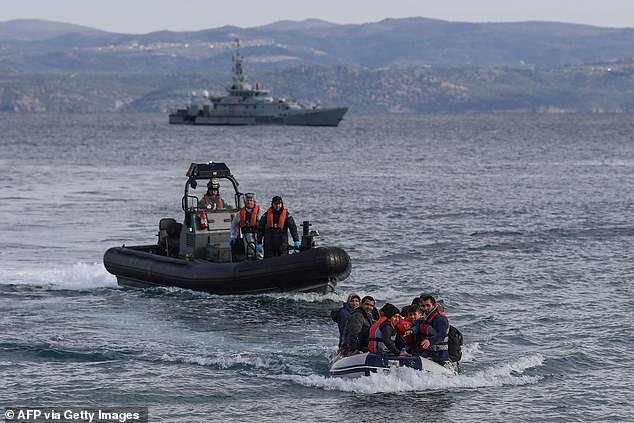 Turkish President Tayyip Erdogan has repeatedly threatened to open the gates for migrants to travel to Europe.

If it did so, it would reverse a pledge Turkey made to the European Union in 2016.

Stotenberg said Friday’s talks would be held under Article 4 of NATO’s founding treaty, which allows any ally to request consultations if it feels its territorial integrity, political independence or security is threatened.

The air strike by Syrian government forces marks the largest death toll for Turkey in a single day since it first intervened in Syria in 2016.

It’s a major escalation in a conflict between Turkish and Russia-backed Syrian forces that has raged since early February.

At least 54 Turkish troops have now been killed in Idlib.

Apart from providing some aerial surveillance over Syria, NATO plays no direct role in the conflict-torn country, but its members are deeply divided over Turkey’s actions.

Turkey’s invasion of the north of the conflict-torn country – along with the criticism and threats of sanctions brandished by fellow allies at Ankara over the offensive – has come close to sparking a crisis at the military alliance.

France in particular has tried to launch debate on what Turkey’s allies should do if Ankara requests their assistance under Article 5 of the Washington Treaty – which requires all allies to come to the defense of another member under attack.

That discussion has not happened.

The US has demanded that both Syria and Russia end their ‘despicable’ offensive in eastern Syria, but also wants no direct involvement. 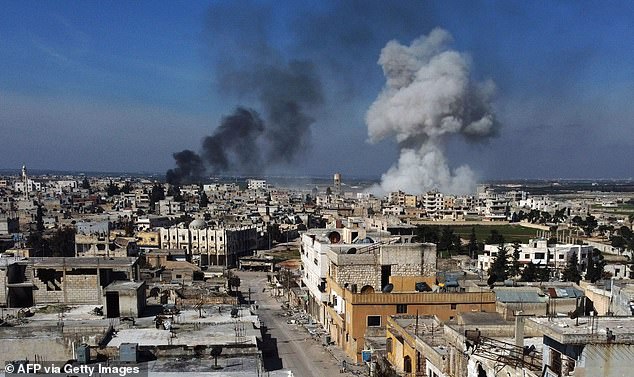 33 Turkish soldiers were killed in a Syrian government airstrike in Idlib late Thursday, the largest one-day death toll for Turkish forces since they intervened in the region in 2016 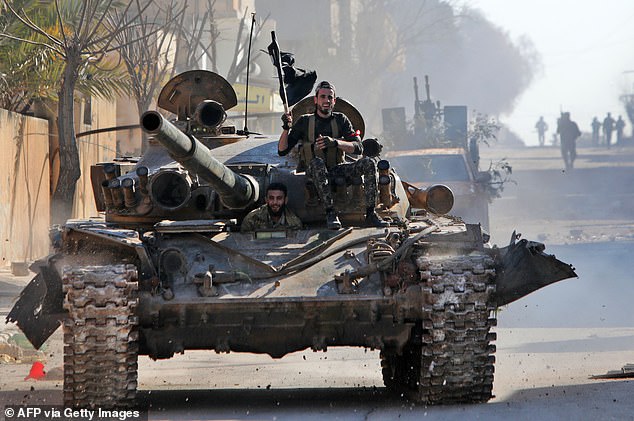 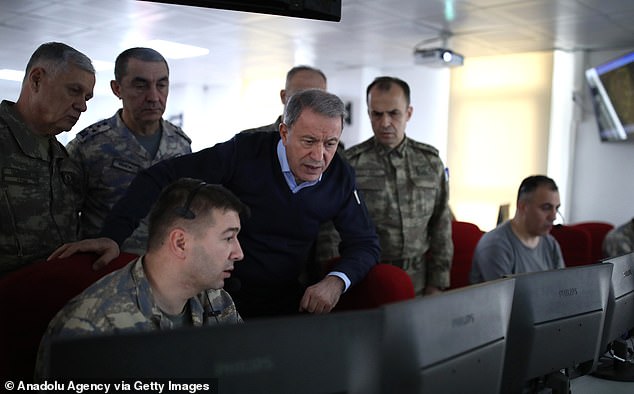 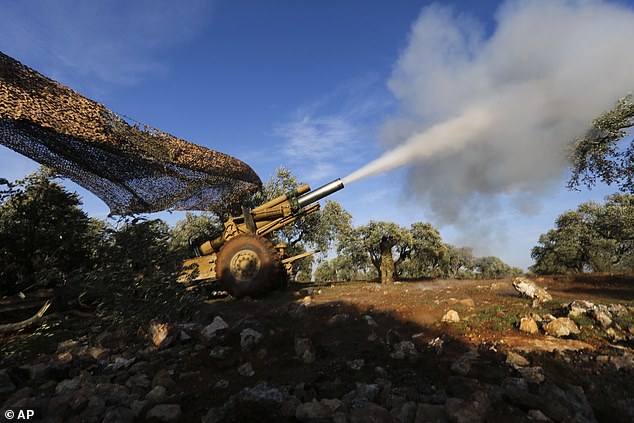 In a statement a US representative said: ‘We stand by our NATO ally Turkey and continue to call for an immediate end to this despicable offensive by the Assad regime, Russia and Iranian-backed forces,’ a State Department spokesperson said.

‘We are looking at options on how we can best support Turkey in this crisis.’

The United Nations also called for urgent action in the northwest of Syria.

Stephane Dujarric said: ‘The Secretary-General reiterates his call for an immediate ceasefire and expresses particular concern about the risk to civilians from escalating military actions.

‘Without urgent action, the risk of even greater escalation grows by the hour.’

Idlib is supposed to be a de-escalation zone in which acts of aggression are meant to be prohibited.

The zone is currently home to four million civilians, many had already been displaced  by regime forces in the war torn country.

More than 1.7 million Syrians moved to the Turkish border due to intense attacks. 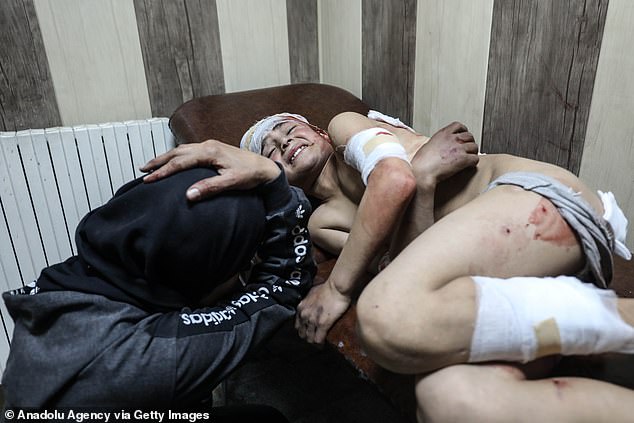 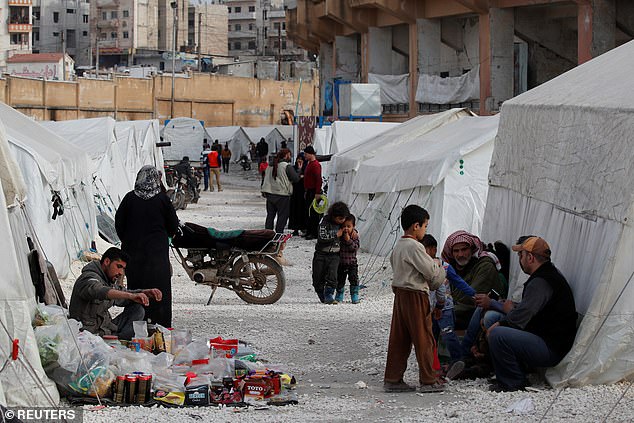 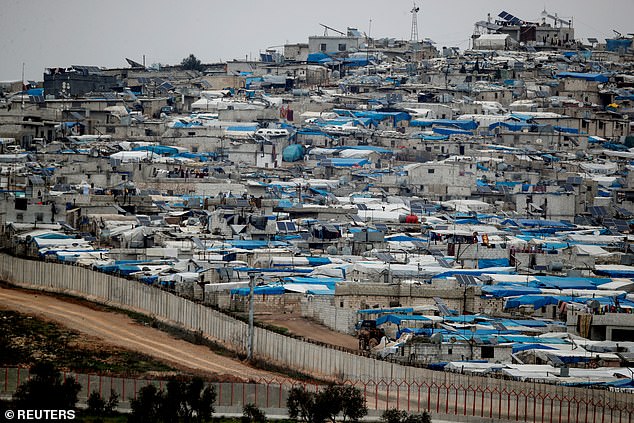 Stunning converted church next to a graveyard goes on sale for £795,000

Where is The A Word filmed? Lake District filming locations revealed, including Keswick and Coniston

'She-Ra and the Princesses of Power' Season 5 Trailer: Prepare for the Final Battle of the Final Season