London: Britain’s Supreme Court has ruled that Uber drivers are workers and not self-employed and are entitled to benefits like holiday and sick pay, in what unions say is a “historic” decision that could upend the gig economy.

Lawyers claimed drivers could be entitled to as much as £12,000 ($21,000) in compensation as a result of the ruling. Uber argues that drivers are independent contractors and that even if a driver is a “worker” that is not the same as an “employee.” 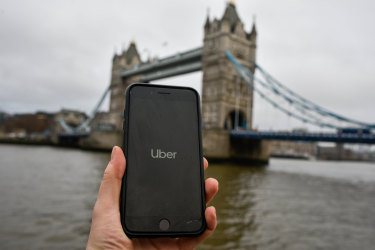 Uber has around 60,000 drivers in Britain; the ruling does not affect UberEats.Credit:Getty

Uber had appealed an earlier decision to the Supreme Court but lost on Friday when the Supreme Court’s seven judges unanimously upheld the lower court ruling, which had found that two Uber drivers were “workers” under British law.

“The employment tribunal was right to find that Uber drivers are workers who therefore qualify for the rights conferred on workers by employment legislation,” said judge George Leggatt, as he read out a summary of the ruling on a court livestream.

Among their reasons, the judges cited Uber’s driver rating and its practice of keeping communications between drivers and passengers to a minimum, which results in the service being “very tightly defined and controlled by Uber.”

“Drivers are in a position of subordination and dependency to Uber,” with little ability to improve their economic position. They only way to increase their earnings is by “working longer hours while constantly meeting Uber’s measures of performance,” the court said.

GMB, the union which brought the case, hailed the end of the lengthy legal battle as a “historic” win and said it could seek compensation for drivers. 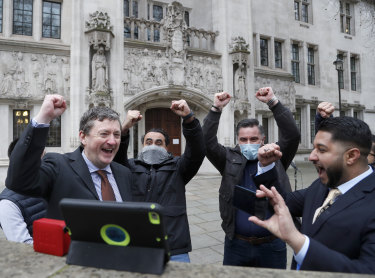 Uber drivers and their union celebrate after hearing the verdict outside the Supreme Court.Credit:AP

“This has been a gruelling four-year legal battle for our members – but it’s ended in a historic win,” Mick Rix from GMB said.

“The Supreme Court has upheld the decision of three previous courts, backing up what GMB has said all along; Uber drivers are workers and entitled to breaks, holiday pay and minimum wage.

“Uber must now stop wasting time and money pursuing lost legal causes and do what’s right by the drivers who prop up its empire.

“GMB will now consult with our Uber driver members over their forthcoming compensation claim,” Rix said.

Uber has around 60,000 drivers in Britain; the ruling does not affect UberEats. The company will argue that the ruling only affects a limited number of drivers pertaining to when the case was brought in 2016.

“We respect the Court’s decision which focussed on a small number of drivers who used the Uber app in 2016,” Jamie Heywood from Uber said in a statement.

“Since then we have made some significant changes to our business, guided by drivers every step of the way.

“These include giving even more control over how they earn and providing new protections like free insurance in case of sickness or injury.

“We are committed to doing more and will now consult with every active driver across the UK to understand the changes they want to see.”

But Nigel McKay from law firm Leigh Day said this would also be fought in court.

“Uber has consistently suggested that the rulings only affect two drivers, but Leigh Day will be claiming compensation on behalf of the thousands of drivers who have joined its claim.

“For many of the drivers that it represents, the claims could be worth thousands of pounds in compensation,” he said.

Killings of Afghans ‘happened all the time’

Truth Seekers a welcome diversion, if not quite a thrilling horror adventure