Victorians could be free to travel anywhere in Australia by early December as state premiers acknowledge low daily case numbers, paving the way for a tourism boom over the summer holidays.

The NSW border will reopen to Victorians from November 23, joining Western Australia and South Australia as states set to open the door this month. 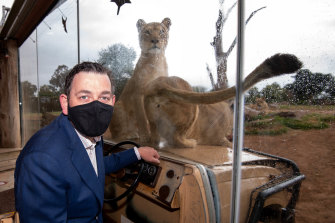 As no coronavirus cases were recorded in Victoria for a fifth consecutive day, Premier Daniel Andrews said NSW Premier Gladys Berejiklian's decision demonstrated her confidence in Victoria's ability to suppress outbreaks and contact trace effectively, putting pressure on other state leaders to reopen to Victoria.

"The Premier of NSW would not be opening her border if she did not have confidence in a couple of important things – the public health response in our state but most importantly confidence in the people of Victoria to stay the course," he said.

"This is very good news for not only those close to the border, but indeed for all Victorians. I would urge Victorians – don't be going to Sydney for Christmas unless you absolutely have to. You want a summer holiday, [then] we've got lots of opportunities here, lots of things on offer. Stay in Victoria."

Ms Berejiklian said on Wednesday that regular movement of people needed to resume as states learnt to live with low levels of the virus circulating.

"With that comes some risk and we accept that, but we believe that is … a calculated risk and we are confident our health system and the processes we have in place in NSW will allow that to happen," she said as nine new COVID-19 cases were recorded in NSW, six of which were in hotel quarantine.

Ms Berejiklian said her motivation to spur travel between states juxtaposed with the hardline approach taken by the Queensland and Western Australian premiers, which have been criticised by the federal government for the strictness of their border rules.

Queensland Premier Annastacia Palaszczuk said on Wednesday she would not be rushed by the decision of NSW and her government would review border restrictions – which block Victorian travellers – at the end of the month. The Queensland government has agreed to the national cabinet's aspiration to lift all state borders by Christmas.

Queensland, where two cases in hotel quarantine were recorded on Wednesday, deems metropolitan Sydney and all of Victoria a COVID-19 hotspot, but this week began accepting travellers from regional Sydney.

"What is encouraging from Victoria is the really low cases. I think they've had zero for a couple of days in a row, but of course they are coming out of lockdown, so we are going to be looking very carefully over the course of November to see how they go," Ms Palaszczuk said.

"Everyone needs to have a bit of caution here, take it one step at a time and see how the community transmission transpires as Victoria comes out of lockdown."

Western Australia's hard border will be weakened on November 14. States with fewer than five cases per day for a two-week period (Victoria is recording 1.7 cases per day on this metric) will be deemed low-risk and people from those jurisdictions will need to quarantine on arrival for 14 days. Travellers from jurisdictions with zero cases for 28 days will not need to quarantine in WA.

Victorians could be free to travel into South Australia, which currently requires an exemption, within a fortnight, Premier Steven Marshall said on Tuesday.

Tasmania's border will open to people travelling from NSW from Friday. Victorians could be permitted to travel to the state from December.

People from metropolitan Melbourne must quarantine on arrival in the Northern Territory but those from regional areas need not. Travel to the ACT is banned for Victorians unless they have an exemption.

As Victoria prepares to again host tourists from the rest of Australia, the state government announced the first investment in its November 24 state budget: $84 million for a series of upgrades to make Werribee Zoo "Australia’s leading open range zoo".

Six Asian elephants will be moved from Melbourne Zoo to a new, more spacious enclosure at Werribee Zoo and a safari gondola will be built by 2024, Mr Andrews said.

"This is not a cost to the budget, it is an $84 million investment in us not just having a good experience but the very best," he said.

Get our Coronavirus Update newsletter for the day’s crucial developments and the numbers you need to know. Sign up to The Sydney Morning Herald’s newsletter here and The Age’s here.

Machine Gun Kelly has a strange plan for his VMA Moonman