Bengaluru, India: India, the world's main supplier of generic drugs, has restricted the export of 26 pharmaceutical ingredients and the medicines made from them, including Paracetamol, a common pain reliever also sold as acetaminophen, as the coronavirus outbreak plays havoc with supply chains.

The Indian government urged calm and said there were enough stocks to manufacture formulations for two to three months. 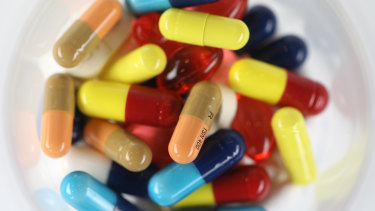 India is a major world supplier of generic drugs.Credit:Bloomberg

The government's list of 26 active pharmaceutical ingredients (APIs) and medicines accounts for 10 per cent of all Indian pharmaceutical exports and includes several antibiotics, such as tinidazole and erythromycin, the hormone progesterone and vitamin B12.

It was unclear how the restriction would impact the availability of these medicines in the countries that import from India and also depend on China. In the US, for instance, Indian imports accounted for 24 per cent of medicines and 31 per cent of medicine ingredients in 2018, according to the US Food and Drug Administration. 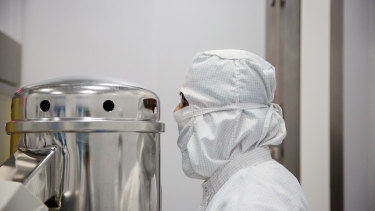 An employee at a pharmaceutical plant in India monitors machinery compressing generic pills for HIV patients.Credit:Bloomberg

Indian drug-makers rely on China, the source of the virus outbreak, for almost 70 per cent of the APIs for their medicines. Industry experts say they are likely to face shortages if the epidemic drags on.

"Export of specified APIs and formulations made from these APIs … is hereby 'restricted' with immediate effect and till further orders," the Indian director-general of foreign trade said in a statement, without explaining the extent of the restrictions.

Dinesh Dua, chairman of the Pharmaceuticals Export Promotion Council of India, said: "Irrespective of the ban, some of these molecules may face shortages for the next couple of months."

The export promotion council falls under the federal commerce ministry.

"If coronavirus is not contained, then in that case there could be acute shortages," Dua said.

In a statement, the Indian federal government said state authorities had been asked to monitor the production and availability of APIs and formulations to prevent black marketing and hoarding.

American drug-makers have said they are monitoring their supply chains and Mylan NV warned last week there could be drug shortages. Eli Lilly and Co said on Tuesday it did not expect the coronavirus outbreak to result in shortages for any of its therapies, including insulin products.

Separately, the Indian government said on Tuesday it had detected "high viral load" in six people who had been in contact with a patient who contracted the virus in Delhi, the capital.

The patient in Delhi was being monitored and was stable, the government said. The six people have been kept in isolation and their samples are being sent to India's National Institute of Virology for confirmation, the government said in a statement.

Prime Minister Narendra Modi sought to quell public fears. "There is no need to panic," he tweeted.

"Had an extensive review regarding preparedness on the COVID-19 Novel Coronavirus. Different ministries & states are working together, from screening people arriving in India to providing prompt medical attention," he added.

Delta variant outbreak in Israel spreads to some vaccinated adults

Nearly 100,000 children test positive for COVID-19 in past two weeks

Trump says national lockdown is ‘something we talk about,’ but unlikely